The stock market remained on pins and needles Thursday, as investors weren't able to carry through Wednesday's big market gain. Although major indexes moved higher at the open, they quickly gave up those early advances. By just after 11 a.m. EDT, the Dow Jones Industrial Average (DJINDICES:^DJI) was down 28 points to 27,913. The S&P 500 (SNPINDEX:^GSPC) dropped 2 points to 3,397, although the Nasdaq Composite (NASDAQINDEX:^IXIC) managed to rise 34 points to 11,176.

The peak of earnings season is long behind us, but there are still some stragglers that are giving their latest reports. Luxury retailer RH (NYSE:RH) brought some good news to its shareholders with its quarterly results. Meanwhile, J.C. Penney (OTC:JCPN.Q) got a buyout offer out of bankruptcy, but investors in the retailer shouldn't get the wrong idea about the prospects for the stock.

No slowdown at RH

Shares of RH soared 22%, climbing to new all-time highs. As much as retail stocks have gotten hit by the COVID-19 pandemic, the luxury home furnishings specialist's numbers showed few signs of any headwinds.

RH's sales were up less than 1% from the year-earlier quarter, but that still marked a victory because of the environment in retail during the period. Moreover, net income soared by nearly 55%, producing earnings of $5.08 per share that were far better than investors following the stock had expected.

RH was particularly pleased that even though it's seeing some challenges with its supply chain, customers continue to order goods. The company touted its 16% rise in order demand, as it shows that once merchandise is available, sales will get a future boost. Moreover, free cash flow in the quarter doubled year over year.

CEO Gary Friedman remains impressed with the speed at which RH has achieved its goals of becoming a premium luxury retailer. The margin levels RH now commands are helping the retailer make it through the coronavirus crisis relatively unscathed. Shareholders like what they're seeing. 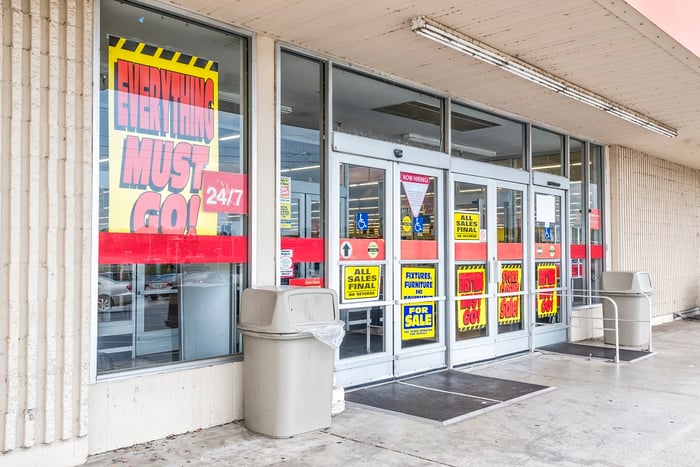 Elsewhere, shares of J.C. Penney were volatile but unchanged as of shortly after 11 a.m. EDT. The retail stock has been under bankruptcy protection for a while now, and it now appears that it might actually emerge from reorganization rather than having to liquidate.

Penney has worked to try to find a buyer willing to keep operating its stores, and today, reports suggested some big players are looking closely at making an offer. Real estate giants Simon Property Group (NYSE:SPG) and Brookfield Property Partners (NASDAQ:BPY) signed a letter of intent to try to carve out a formal agreement.

Under the deal, Simon and Brookfield would invest $300 million, and the surviving Penney would assume $500 million of ongoing debt. That, along with outside bank financing, would hopefully keep Penney stores operating at least through this year's holiday season.

What's important to understand, though, is that there's no guarantee that existing shareholders will get anything out of the deal even if it goes through. Confusion about that outcome is part of why the stock is volatile on Thursday. Avoiding liquidation is potentially good for creditors, but it's likely not going to make much difference for those who've held onto their stock.