Please ensure Javascript is enabled for purposes of website accessibility
Log In Help Join The Motley Fool
Free Article Join Over 1 Million Premium Members And Get More In-Depth Stock Guidance and Research
By Jason Hawthorne - Jun 12, 2021 at 6:44AM

The metrics for this digital healthcare platform are headed higher for the right reasons.

A lot has been made of the recent trend of groups of retail investors acting in concert to drive the shares of near-defunct businesses higher. Unlike the leaders of some other companies in that position, the management team at AMC Entertainment (AMC -0.94%) took advantage of its recent share price surge by selling shares to raise cash -- nearly $600 million worth in June. That followed equity raises in January and May that netted about $1.3 billion total. It was a shrewd tactic, and is leading some to believe the company might have a bright future after all.

It currently has about $1 billion of cash on its balance sheet. That's a lot, but many on Wall Street seem to think it's not enough. Almost 23% of the float -- shares available to trade -- is still sold short. Punishing those betting against the stock has been a primary reason why many investors have been buying it. But such investors might find GoodRx (GDRX -2.04%) a better target. 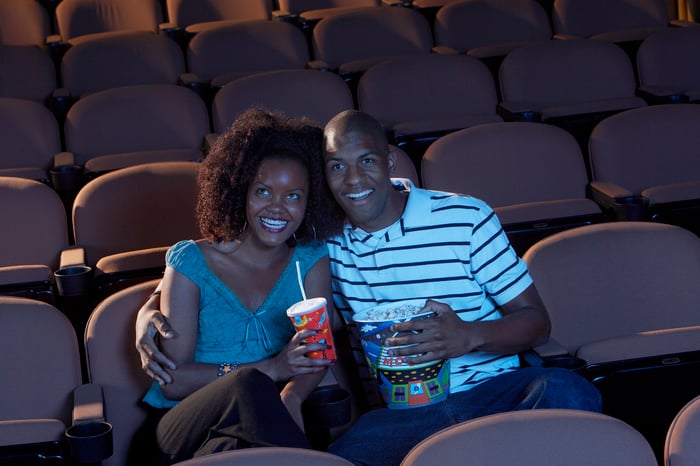 Wall Street is betting heavily against the digital prescription drug platform. More than 27% of its float is sold short, but it has as much cash as AMC and a clearer path to market-beating returns. Let's dig in to see why it might be a better candidate for anyone wanting to take advantage of the retail movement.

Not everything is as it seems

There is an old saying that statistics don't lie, but statisticians do. It means that someone with an agenda can cherry-pick the data that supports the story they want to tell. That easier when you only look at one metric. For instance, both AMC and GoodRx have cash stockpiles of around $1 billion. However, they've taken different paths to acquire them.

For AMC, its recent equity offerings might have provided a lifeline, but they also significantly diluted existing shareholders. Someone holding 1.09 million shares of the movie theater operator owned 1% of the company at the end of June 2000. A year later, those same shares only represented 0.2% of AMC. But over the past year, the share count of GoodRx has hardly budged. 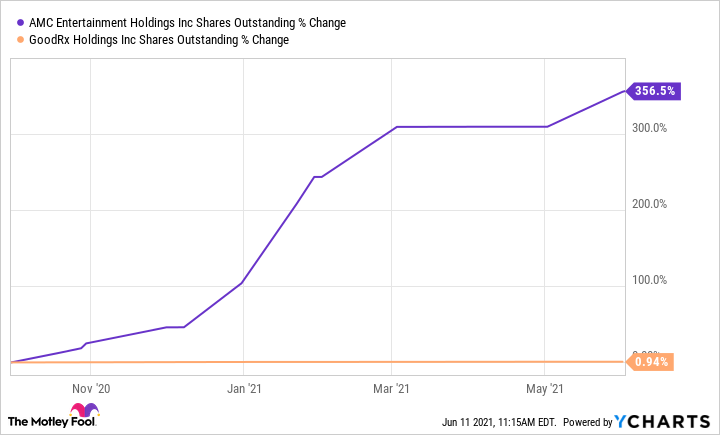 Trending in opposite directions

Cash is great, and it's hard to find fault in a company wanting to have more of it. That said, stock prices are ultimately driven by what the companies do with the cash. Now that almost all of AMC's theaters in the U.S. have reopened, management has an opportunity to put its money to work. It needs to hurry. Despite raising $2 billion over the past six months, much of that was used to plug the hole burned during the pandemic. Simply running the business consumed more than $1.4 billion over the last five fiscal quarters.

On the other hand, GoodRx has been growing revenue and generating cash uninterrupted since long before it went public last year. That's because user growth has trended sharply higher. In fact, it is the user trajectory that should have shareholders of AMC most worried. While more and more people are taking advantage of GoodRx, the number of moviegoers visiting AMC theaters was stagnating even before the pandemic.

When the music stops

Trends in social media are notoriously fickle. Right now, buying stocks that the big players on Wall Street are heavily betting against is in vogue. Those small traders are making a statement that the system is rigged and that the market's powerhouses need to be taught a lesson. It has certainly generated activity. The numbers of AMC shares traded daily during both the January and June frenzies were consistently more than 100-times the daily average in 2020. But attention spans are short. It won't last.

Like seats in a game of musical chairs, traders swap shares again and again, hoping not to be caught without a place. Eventually, the music will stop. The last time that happened to AMC, the stock cratered 70% and trading volume fell by more than 97%.

Investors who want to make a statement by buying a heavily shorted stock might be better off picking one with a bright future. GoodRx has a growing user base and plenty of cash generated through its normal operations. It might turn out that the most profitable way to buck Wall Street is to buy shares of a growing company and hold onto them for years.