Please ensure Javascript is enabled for purposes of website accessibility
Log In Help Join The Motley Fool
Free Article Join Over 1 Million Premium Members And Get More In-Depth Stock Guidance and Research
By Prosper Junior Bakiny - Jun 13, 2021 at 8:19AM

These two companies are less volatile than the cryptocurrency, and they offer better long-term prospects, too.

What has been the hottest investing trend since the beginning of the year? It's hard to give an objective answer to that question, but no matter where you stand on it, it's unquestionable that cryptocurrencies in general -- and Dogecoin (DOGE 6.78%) in particular -- need to be a part of that discussion. As cryptocurrencies are increasingly perceived as a hedge against inflation, Dogecoin has skyrocketed in value in the past few months. Nevertheless, the long-term bull case for Dogecoin remains flimsy.

For one, it remains a highly volatile asset. And random Tweets from Tesla CEO Elon Musk seem to be a major catalyst for its value to rise or fall, which is a worry in and of itself. Further, according to online business directory Cryptwerk, only about 1,300 businesses accept Dogecoin as payment, which is a minuscule fraction of the total number of companies in the U.S.

For these reasons (and many more), Dogecoin probably isn't your best bet if you're looking for an asset that can continue to perform well in the long run. Instead, it's best to turn to solid businesses with strong growth prospects. Two that fit the bill are Tandem Diabetes Care (TNDM 2.52%) and Veeva Systems (VEEV 1.59%). 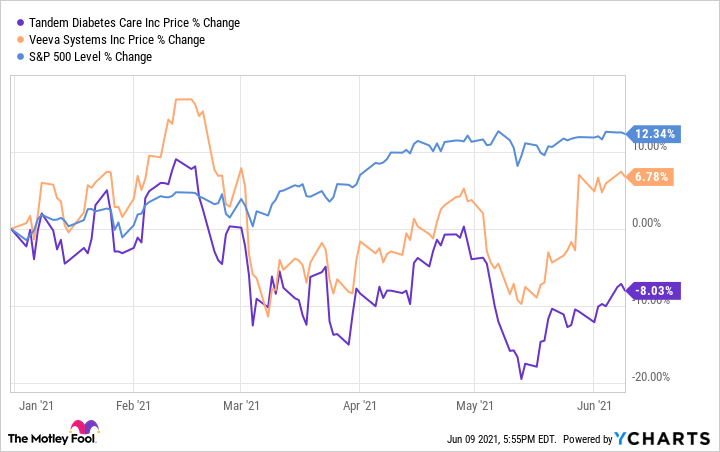 Medical devices specialist Tandem Diabetes Care has performed poorly in the stock market year to date. Since the beginning of the year, shares of the healthcare company are down by 8.03%, compared with gains of 12.34% for the S&P 500. Despite this poor showing for its shares, though, Tandem Diabetes's financial results continue to be strong.

The company recorded sales of $141 million in the first quarter, 44% higher than the prior-year quarter. As a reminder, Tandem Diabetes makes the bulk of its revenue from the sale of its t:slim X2 insulin pump (and accompanying accessories), an innovative product for managing insulin-dependent diabetes. In the first quarter ending March 31, shipments of its crown jewel grew by 46% to 25,352.

Tandem Diabetes isn't profitable yet, but its net loss per share shrunk to $0.08 during the first quarter, compared with $0.25 during the year-ago period. At least two factors could continue to fuel Tandem Diabetes' growth for many years to come. First, there is the unfortunate increase in the world's population of patients with diabetes. In the U.S. alone, about one in three people will have diabetes by 2050, according to some estimates. Only 10% had diabetes in the country as of 2018, and only 0.93% did in 1958. The need for products capable of making the lives of diabetes patients a bit easier won't subside anytime soon -- quite the contrary. Second, Tandem Diabetes continues to innovate. A major step forward for its t:slim X2 insulin pump was the clearance of its Control-IQ Technology by the U.S. Food and Drug Administration (FDA) back in 2019.

Control-IQ Technology is a feature that allows the t:slim X2 insulin pump to be used in conjunction with continuous glucose monitoring (CGM) Systems such as Dexcom's G6. When paired together, these two devices help diabetes patients keep their glucose levels within a desired range. The process is automated thanks to Tandem Diabetes' Control-IQ Technology feature.

Tandem Diabetes recently reported results from a study that showed the use of the t:slim X2 insulin pump with Control-IQ Technology leads to improved time in range (the amount of time a person with diabetes spends within the target blood sugar level) for patients.

The healthcare company is always looking to add new features to its products, and it is also working on newer, better insulin pumps. And with an underpenetrated addressable market in the U.S. and abroad, the company can still grow by leaps and bounds. Don't be fooled by its recent struggles in the market -- this healthcare stock still has many great days ahead. Now is as good a time as any to initiate a position.

Veeva Systems is primarily a tech company; it provides cloud-based customer relationship management (CRM) solutions to drugmakers and other players in the life sciences industry. The services Veeva Systems offers are in high demand for many reasons, one of which is that developing products in the life sciences industry is a legal and logistical nightmare.

Veeva Systems' suite of offerings helps life science companies efficiently navigate these challenges while ensuring legal compliance. One way to gauge how happy the company's customers are with its products is by looking at the retention rates for its subscription services -- which make up the bulk of its revenue. During its past three fiscal years, the company had retention rates between 121% and 124%.

Another way to gauge the success of Veeva Systems is by looking at the company's revenue growth. Veeva Systems' quarterly top line has increased by 230.1% over the past five years. Veeva Systems' latest quarterly update was also impressive. In its Q1 2022, which ended April 30, the company reported revenue of $433.6 million, a 29% increase over the year-ago period. Earnings per share (EPS) climbed to $0.71, up from the $0.54 reported during the comparable period of the previous fiscal year.

Veeva Systems can keep growing for many years to come. For one, the company is always working on newer and better products. Just last year, it introduced MyVeeva, a tool to speed up the clinical trial process for pharmaceutical companies. And that's just one of the more recent offerings in its arsenal. Also, Veeva Systems has been expanding into other industries in recent years, including consumer packaged goods (CPG), chemicals, and cosmetics.

All three of these segments share one key similarity with the life science industry: they are highly regulated. Veeva Systems is looking to replicate the success it has already had with its entry into these industries. With a total addressable market worth at least $12 billion, the company shows no sign of hitting a brick wall anytime soon. All these factors make Veeva Systems an excellent stock to buy today.