Please ensure Javascript is enabled for purposes of website accessibility
Log In Help Join The Motley Fool
Free Article Join Over 1 Million Premium Members And Get More In-Depth Stock Guidance and Research
By David Jagielski - Jun 15, 2021 at 10:08AM

The tech company just isn't a serious competitor, yet.

The telehealth industry could be worth nearly $192 billion by 2025, marking an incredible 37.7% compound annual growth rate between now and then. Little wonder, then, that the industry has been attracting some big names. One of the more notable companies to show interest is Amazon (AMZN -0.26%). The tech giant has plenty of resources at its disposal to disrupt the market and wrestle away market share from a top company like Teladoc Health (TDOC 1.51%).

And while a behemoth like Amazon looming in the wings might have executives concerned about their company's future, Teladoc CEO Jason Gorevic isn't all that worried. In a recent interview, he called Amazon's move into healthcare "overrated." Is he wrong? 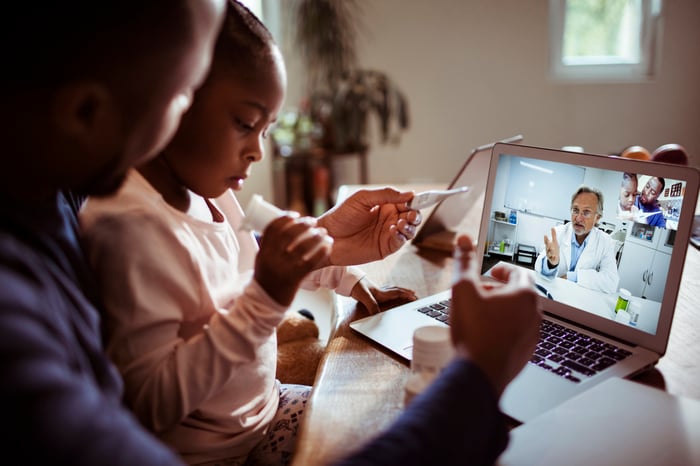 In an interview with CNBC, Gorevic said the Amazon threat was overrated because at that point Amazon had just one enterprise client -- Precor, which is a subsidiary of Peloton.

To its credit, Amazon only announced in March that it would be launching Amazon Care across the country and that the rollout would happen during the summer. The tech company describes its service as having two components: online virtual care where patients can video chat or message a nurse or doctor (this is comparable to your typical telehealth service), plus in-person care where a medical professional visits a patient's home. Up until recently, the service has only been available to Amazon employees, but the company is now targeting other businesses as well.

At a Wall Street Journal Tech Health event held earlier this month, Amazon Vice President Babak Parviz said that the business has now signed up "multiple companies" for Amazon Care. While that doesn't sound like a whole lot more than one, it does suggest that the needle is moving.

Should Teladoc be concerned?

Amazon certainly appears to have its sights set on the healthcare market, and that goes beyond just telehealth. Last year, the company launched Amazon Pharmacy, which delivers prescriptions and promises to help Prime members save on medication. There have also been rumors that the company is looking to go one step further and launch physical pharmacy stores. Although that remains unconfirmed, it's possible that Amazon could deploy them within its existing Whole Foods locations.

If Teladoc has reason to be worried, then, so do retail pharmacies like Walgreens and CVS. Recently listed GoodRx also faces challenges if Amazon is able to provide cheap prescriptions online, thus negating a need for the former's services. Teladoc is just one of many companies that Amazon could potentially be competing against as it dives into healthcare. But right now, given all the other areas the business is expanding into, I wouldn't worry just yet.

The telehealth segment is already competitive even without Amazon. In addition to Teladoc's main rival, Amwell, CVS also offers virtual visits on its website, Cigna recently acquired MDLive, Verizon's BlueJeans service is a potential competitor, and so is LifeMD. Those are just some of the competitors in the market right now, and while throwing Amazon into the mix will add a potentially big one, Teladoc is doing well amid all this competition. I think this means that the market is large enough to support all these choices -- and also that Teladoc has been able to stand out among its peers.

And the good news is Teladoc is more than just a telehealth business now that it has merged with Livongo Health, a chronic care company that helps patients with diabetes manage their glucose levels. Earlier this year, Teladoc also partnered with DexCom to incorporate data from its continuous glucose monitoring system so that patients have more information and insights that can help them make better decisions, adding even more value for its users.

In its most recent results, released April 28, Teladoc's sales of $454 million for the period ending March 31 grew 151% year over year (although those numbers benefited from the inclusion of Livongo) and its total visits of 3.2 million were up by 56%. And for the next quarter, the company projects that revenue will climb still higher, up to $505 million.

Is now the time to sell Teladoc?

Although it has been a tough year so far for Teladoc with its shares down more than 22% in 2021 (the S&P 500 is up 13%), I expect the stock will recover. It hasn't even been a year since the company closed on its deal with Livongo, and with a broader customer base and more services to offer, it is a more diverse business and a safer buy over the long term. That's one of the reasons I don't plan on selling my shares anytime soon, as it's far too early to tell how much bigger Teladoc's business may get or where its sales will top out.

While Amazon may see telehealth as a great way to diversify its business, that doesn't mean it's going all in or that it will aggressively pursue the market. It acquired Whole Foods four years ago and the stores account for barely 1% of the U.S. grocery market today. Although that is a much more developed industry than telehealth and a tough one to penetrate, Amazon has the resources at its disposal to make a bigger move if it wants to, and it hasn't.

Teladoc shouldn't ignore the potential threat from Amazon, but management and investors shouldn't lose sleep over it, either. The healthcare company remains in great shape and could be a great investment to hold for many years.