Tesla has undertaken many notable side projects in the past. But restaurants are much costlier than bottling a barrel of tequila.

Back in 2018, CEO Elon Musk shared in a Tweet that Tesla (TSLA 7.67%) will open an old-school drive-in restaurant featuring roller skates and famous movie clips in a California Supercharger station. Historically, Musk has made some bold claims online, and not all of his ideas have come to fruition.

For this reason, it made headlines when Tesla actually filed for trademarks in the restaurant services industry -- over three years later.  Despite the hype, if Tesla goes through with a restaurant in its Supercharger network, investors need to carefully consider whether it is a worthwhile investment of capital and management energy. 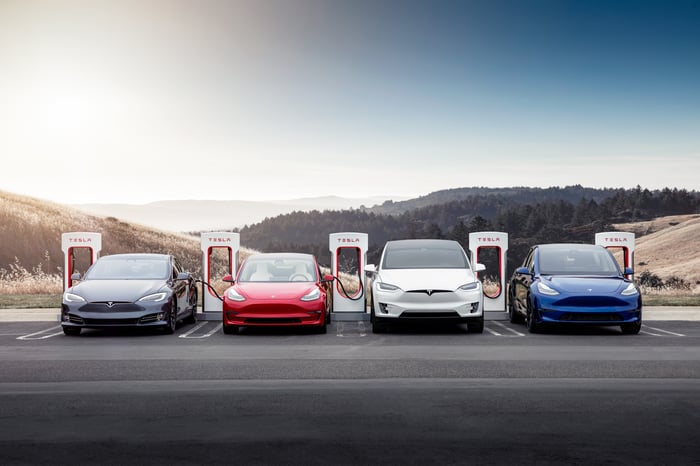 The problem Tesla wants to solve

Tesla's Supercharger network consists of 908 Supercharger stations  across the country, each with varying numbers of individual Superchargers. The problem is that charging a Tesla takes time, and the company wants to provide Tesla drivers with entertainment while they wait to hit the road again.

However, doing some digging on Tesla's Supercharger map reveals some insight into this problem. In the U.S., not a single Supercharger can be found beyond a short walking distance to a restaurant, coffee shop, grocery store, or service plaza. Tesla has located most Supercharger stations near several of these establishments, and some even have direct access to shopping centers.

Is this problem worth solving?

Before addressing this question, it's important to understand all the charging options that Tesla drivers have. Supercharger stations, destination chargers, and at-home chargers all have different use cases, pros, and cons.

Supercharger stations are located in most major cities and along popular travel routes for high-speed charging during long-distance drives.  A standard Tesla Model 3 can charge to full capacity in under an hour at a Supercharger. Charging fees can vary based on location, charge volume, and seasonality but generally run around 28 cents per kilowatt-hour (kWh).

Destination chargers are installed by Tesla's 'Charging Partners' -- usually shopping centers, hotels, movie theaters, or restaurants -- and allow patrons of those businesses to charge for free. A destination charger's speed is significantly lower than a Supercharger, but drivers can easily reach half or full battery capacity for free while shopping or staying at a hotel.

Drivers' final charging option is to use their at-home charger, which is included with every Tesla vehicle purchase. The added utility expense varies based on location, but the average U.S. electricity rate runs about 13.2 cents per kWh -- less than half the price of using a Supercharger.

With the ability to charge cheaply at home and free at over 4,500 destination chargers across the country, it's perfectly logical in many cases for a Tesla driver to never use a Supercharger. Essentially, the only use case for a Supercharger is a road trip, and even in those cases many drivers would likely choose other food, coffee, or shopping options in the area over Tesla's proposed retro diner while they wait.

Knowing this, it is difficult to argue that it would be worth it for Tesla to invest so heavily in enhancing user experience in the less-frequented Supercharger network. Plus, considering the business incentive for being a Tesla Charging Partner, it's plausible to expect businesses to open destination chargers at a faster rate than Tesla launches new Supercharger stations.

Tesla, keep your eyes on the road

There is undoubtedly a lucrative captive market opportunity in electric vehicle charging in general. However, that opportunity will likely be more valuable for Tesla's Charging Partners via destination chargers than for Tesla via its Supercharger network because of the frequency of their respective usage and driver options during their charge time.

Especially considering the restaurant industry's infamously razor-thin margins, most investors would prefer to see Tesla stay focused on expanding production capacity, recovering its sales slump in China, and fixing the "significant mistakes" it made in rolling out its solar roof business. If not, the diversion of company resources to a restaurant venture will very likely hurt the stock.