Please ensure Javascript is enabled for purposes of website accessibility
Log In Help Join The Motley Fool
Free Article Join Over 1 Million Premium Members And Get More In-Depth Stock Guidance and Research
By Timothy Green - Jun 17, 2021 at 7:15AM

The automaker just upped its commitment to its electric and autonomous future to $35 billion through 2025.

General Motors' (GM -1.51%) plan back in March 2020 was to invest $20 billion over five years in electric and autonomous vehicles. That money would go toward building and equipping factories, engineering expenses, and other development costs. At the time, GM aimed to sell more than 1 million electric vehicles by 2025, with dozens of new models based on its home-grown Ultium battery technology.

GM bumped up the size of that planned investment to $27 billion late last year. It also accelerated the development of a dozen of its upcoming EVs, including the GMC Hummer EV. While the Hummer EV may not sell in huge volumes, it will act as a showcase for the Ultium platform. The company is promising more than 300 miles of range on a full charge, as much as 1,000 horsepower on the pickup version, and fast charging capabilities. 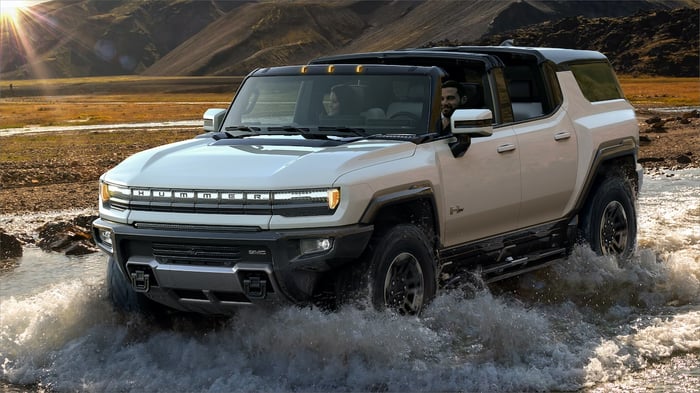 Make it an even $35 billion

On Wednesday, GM announced yet another increase in its commitment to EVs and AVs. The company now plans to invest $35 billion through 2025, a 75% increase from its initial $20 billion plan. The company is pulling forward construction of two U.S. Ultium battery cell plants. These plants are in addition to battery cell plants currently under construction in Tennessee and Ohio.

Previously, about two-thirds of the 30 planned EV models set to launch by 2025 would have been available in North America. With the increased investment, GM is boosting manufacturing capacity for electric SUVs and adding new electric commercial truck models to the plan.

The addition of those commercial trucks to GM's agenda may have come in response to Ford's planned launch of the all-electric F-150 Lightning. Ford's first foray into electric pickup trucks looks impressive, with a solid set of features and a low starting price. The F-150 has been the top-selling pickup truck in the U.S. for decades, and Ford will leverage that track record in its attempt to dominate the market for electric trucks.

GM's increased battery production will also fuel its plans to sell its technology to other companies. It's collaborating with auto giant Honda to build two EVs using Ultium technology, and it will supply Ultium batteries to Wabtec for use in locomotives. GM had a long history in the locomotive business, but it sold its locomotive manufacturing unit in 2005.

GM is also ramping up its autonomous vehicle plans. The company's financial arm has provided a $5 billion credit facility to Cruise, which is majority owned by GM, to scale its fleet of Cruise Origin self-driving vehicles. The Origin, designed to be used by ridesharing services, will be produced commercially at GM's Factory Zero assembly center in Detroit starting in early 2023.

GM is capable of investing so much in its EV and AV initiatives thanks to unexpectedly strong financial results. The company now expects to produce adjusted earnings before interest and taxes (EBIT) of between $8.5 billion and $9.5 billion in the first half of 2021. Previously, GM was guiding for adjusted EBIT of just $5.5 billion for the period.

The increase in expected profits was due to a better-than-expected performance from GM Financial, strong demand for its vehicles, and an improvement in semiconductor supply. Like all automakers, GM is dealing with a global shortage of semiconductor chips. The company seems to be managing it effectively, although plenty of uncertainty remains.

I wrote back in November that GM was the only electric car stock worth buying. With its ramped-up investment plans, and with serious problems befalling EV upstarts like Lordstown Motors, I believe that now more than ever.