Please ensure Javascript is enabled for purposes of website accessibility
Log In Help Join The Motley Fool
Free Article Join Over 1 Million Premium Members And Get More In-Depth Stock Guidance and Research
By Adam Levine-Weinberg - May 30, 2021 at 10:04AM

Lots of automakers are about to start selling electric trucks. Here's why Ford's F-150 Lightning holds so much promise.

The linchpin of Ford's electric plans

At Ford's recent investor day, executives made it clear that the company is going "all in" on EVs. The automaker plans to invest over $30 billion in EVs and battery technology through 2025, laying the foundation for it to transition an estimated 40% of its annual sales volume to EVs by 2030.

Ford began its push to become relevant in the EV market with the Mustang Mach-E, which it began delivering at the very end of 2020. The Mustang Mach-E got a strong reception from customers, quickly racking up tens of thousands of reservations. However, the Mach-E is targeting a relatively niche high-performance market, limiting its sales potential.

By contrast, full-size trucks are Ford's bread and butter. In 2018 and 2019 -- before supply constraints started to weigh on sales -- Ford typically delivered about 900,000 F-Series trucks annually in the U.S. alone. This represented 36% to 37% of its annual volume domestically and an even higher percentage of its revenue. Many analysts estimate that F-Series trucks generate virtually all of Ford's profits. Thus, the rest of Ford's vehicle lineup pales in comparison to the importance of its F-Series trucks. In stark terms, Ford's future depends on maintaining its current dominance in the U.S. pickup market as EVs gain market share from traditional internal combustion vehicles. The F-150 Lightning gives it a great shot at succeeding in that objective.

A focus on utility

Ford expects to begin deliveries of the F-150 Lightning next spring. Several other electric trucks are likely to beat it to market. Among established automakers, General Motors (GM 1.20%) and Tesla (TSLA -1.38%) expect to release their first electric pickup trucks later this year or in early 2022.

However, these automakers are targeting radically different audiences. The initial version of GM's GMC HUMMER EV -- due out later this year -- has an eye-popping starting price of $112,595. (It still sold out its low-volume initial run in just 10 minutes!) GM plans to introduce cheaper versions over time, bringing the starting price down to $79,995 by 2024. Still, this positions the GMC HUMMER as a lifestyle truck for wealthy consumers rather than a practical option for a typical truck buyer. (GM will bring a more utilitarian Chevy Silverado EV to market later, perhaps in 2023.)

Tesla is targeting much lower price points for its Cybertruck. It hopes to offer a single-motor version at a starting price of just $39,900. Even if it can't hit that price, its dual-motor and tri-motor versions will start at $49,900 and $69,900, respectively.

Those prices look quite reasonable relative to the projected range and towing power of those models. However, Tesla opted for a futuristic design that won't appeal to most traditional truck buyers. In short, Tesla's Cybertruck is also positioned as a lifestyle truck. 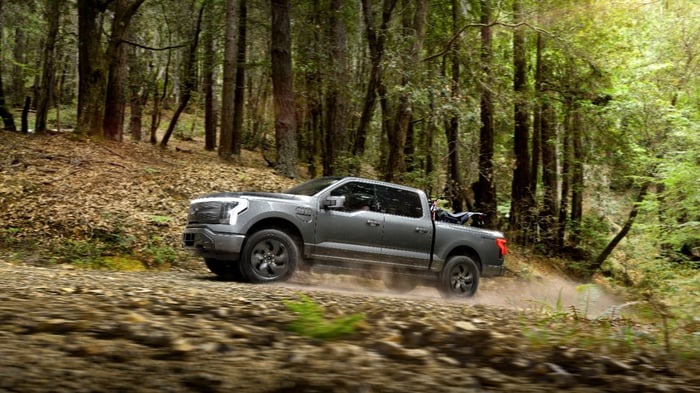 Moreover, Ford targeted utility in all aspects of its design. Just to give a few examples, the F-150 Lightning offers the most torque of any F-150, it can provide power at job sites and function as a backup power source for an owner's home, and its "frunk" offers a generous amount of secure storage space.

Whereas its competitors' initial forays into electric trucks target lifestyle buyers with distinctive designs and high performance, Ford simply aspires to make the F-150 Lightning an even better version of the F-150. Considering the popularity of Ford's existing truck franchise, that's a great strategy.

Sure enough, the Ford F-150 Lightning amassed 70,000 reservations in just a week. Looking ahead, it's easy to see how F-150 Lightning sales could surpass traditional F-150 sales within a decade. The additional features and the fuel and maintenance cost savings made possible by an all-electric design will be extremely appealing to traditional truck buyers.

In the near term, production constraints will dictate Ford's ability to ramp up F-150 Lightning sales. However, before long, electric trucks could start contributing in a big way to the Blue Oval's revenue and profitability.