Please ensure Javascript is enabled for purposes of website accessibility
Log In Help Join The Motley Fool
Free Article Join Over 1 Million Premium Members And Get More In-Depth Stock Guidance and Research
By Jason Hawthorne - Jun 19, 2021 at 6:45AM

Efficacy against variants is showing the drug is the gold standard in preventing COVID.

Once the pandemic started, people spent much of the rest of 2020 waiting for vaccines to arrive. When they did -- thanks to Pfizer, BioNTech, and Moderna -- the results were much better than most had hoped for.

With much of the country vaccinated, daily cases are now down more than 95% in the U.S. But the story isn't over. 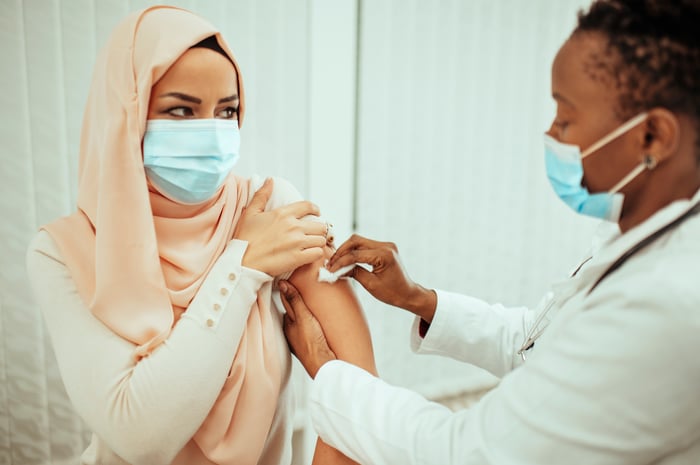 The Pfizer-BioNTech drug -- now marketed as Comirnaty -- was the first to share phase 3 data. In mid-November 2020, they announced their drug was 95% effective in protecting against COVID-19.

Moderna followed two weeks later with its own impressive results. Since then, a few others have followed suit. To date, Johnson & Johnson's is the only additional jab to receive authorization in the U.S.

Of course, it isn't an apples-to-apples comparison. The earlier clinical trials had more of a static target. As times goes on, there are actually different versions of the virus circulating.

When viruses hijack the machinery of a cell to make copies of themselves, those copies sometimes end up with slight errors. The errors, or mutations, usually don't have much impact, as we never even know they exist.

Every once in a while, a mutation gives the virus some enhanced properties. That can show up as an illness with more severe symptoms or even one that's easier to spread.

Several of those mutations -- known as variants -- of the SARS-CoV-2 virus have been circulating in different parts of the world. And both investors and society at large are focused on how well the existing vaccines are able to protect against them.

The delta variant has already become the dominant strain in the U.K. and is on its way to becoming the same in the U.S. That's troubling because the U.S. Centers for Disease Control and Prevention (CDC) has said the mutation is more contagious than other variants and causes more severe symptoms.

It already makes up 10% of all new cases in the U.S. That's up from just 6% in a week. Thankfully, the Pfizer vaccine holds its own against the mutation.

Hit me one more time

Albert Bourla, Pfizer's CEO, has said that his company tested its vaccine against the variants and has them covered. That's true ... kind of. Analysis in the U.K. showed two doses of the company's vaccine still provided significant protection from the mutated virus.

That full regimen was 92% effective in preventing symptomatic COVID from the alpha mutation. It dropped to 79% effective against the delta variant. Although there have been no studies of the Moderna vaccine, the performance is expected to be the same, according to White House medical advisor Dr. Anthony Fauci.

The story isn't as rosy after one jab. In that period before the second dose does its magic, the effectiveness was a far less robust 33%. Previously, the CDC had said the first shot of either the Pfizer or Moderna vaccine was 80% effective at preventing COVID.

All told, it's establishing a trend of slightly waning efficacy with each subsequent variant. Still, almost 18 months removed from the original sequencing of the virus, Pfizer's (and theoretically Moderna's) vaccines continue to offer protection far greater than even the best year's flu vaccine.

Beyond the vaccines' efficacy in fighting variants of the SARS-CoV-2 virus, there's still another reason to be hopeful that the worst of the pandemic is behind us. Since Pfizer's and Moderna's drugs use messenger RNA (mRNA) -- instructions for cells to make proteins -- they can be easily modified to address new variants. In fact, the leader of the Moderna vaccine team said it could be changed in a matter of weeks, if needed.

Now that the manufacturing networks have been put in place, any modified vaccine would arrive much faster than the initial drug. Bourla said on Pfizer's most recent earnings call that the company is conducting a study designed to obtain regulatory approval in 100 days for an updated vaccine, if needed. That data is expected in early July.

When the Pfizer vaccine first arrived, it was considered a scientific marvel as the first ever to be authorized using mRNA. As the pandemic goes on, it's becoming clear that it might have been even more impressive than first thought.