Please ensure Javascript is enabled for purposes of website accessibility
Log In Help Join The Motley Fool
Free Article Join Over 1 Million Premium Members And Get More In-Depth Stock Guidance and Research
By James Brumley - Updated Jun 22, 2021 at 9:15AM

The best way to get out of trouble is to never let yourself get into trouble in the first place.

Let's face it. Even if you're a super-conservative investor, if you own any stocks at all then you're still taking on more risk than you might by stuffing all your extra money under your mattress. And if you're a more aggressive investor, fuhgeddaboudit. You're not taking on Vegas-caliber sorts of risks, but there are certainly some people dancing dangerously close to that line.

The thing is, you don't have to blindly accept risks and simply chalk it up to just being the way the stock market works. You can do something to abate your biggest risks, and you can do so without crimping your overall returns.

Here's a plan of action for dealing with the three biggest risks all investors face sooner or later.

1. A bear market sets in right as retirement begins

It stinks. You've worked hard for more than 30 years, scrimped and saved and invested your way to a nice nest-egg, and just as soon as you're given the golden watch the market tanks. You're forced to make drastic cuts to your planned monthly budget because your IRA distributions will deplete your principal much faster than you had originally anticipated. 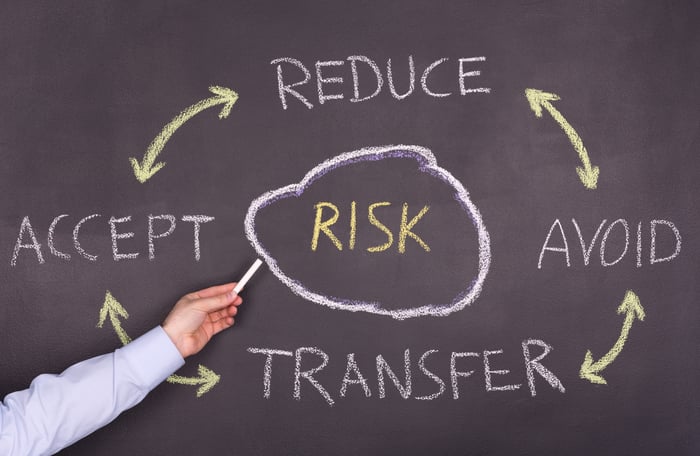 What to do about it: There's nothing you can do to prevent a bear market from taking shape. But, there's a great deal you can do one, two, and three years before you retire. Namely, cut back on your net exposure to equities, and beef up your exposure to more stable holdings like bonds.

That's easier said than done to be sure. You feel like you're leaving money on the table by not remaining fully invested when the environment feels so bullish. This might help motivate you to think more defensively -- fund company Guggenheim calculates a sell-off of 40% or more for the S&P 500 takes an average of nearly two years to play out from peak to trough, and that it takes nearly five years to reclaim the pre-pullback peak. While sell-offs that steep are rare, no retiree can afford to simply "ride it out" should one take shape at the worst possible time.

2. Your portfolio fails to perform as well as expected

You're counting on earning an average of around 10% per year on your stocks, but through a combination of bad luck, unfortunate timing, and a few misguided moves, you're only averaging about 8% per year. That small differential is actually going to leave you short of your investing goal.

What to do about it: You can't change the past. But, trying to make up for a historically lagging performance by becoming more aggressive -- and taking more risks -- isn't the right answer. Higher-risk holdings only make sense if you've got more time rather than less time for them to bear fruit. Ironically, the effort to beat the market typically causes investors to underperform it.

Instead, the smart-money move is instead simplifying your portfolio with more passive investments like index funds that are designed to mirror the broad market's returns. And if you still can't bring yourself to step into an index fund like the SPDR S&P 500 ETF Trust (SPY 1.69%), at least allocate your holdings in a way that includes all sectors, several geographies, and multiple asset categories like bonds, stocks, and real estate.

Whatever you do, the last thing you want to do is begin taking bigger, ill-advised risks simply for the sake of taking bigger risks. Work longer, save more, spend less. Just don't sacrifice your preference for holding quality companies with a penchant for high-flying stocks. It never works out the way you hope it will.

Finally, although it rarely ends up being the problem investors fear it could become, thanks to a very accommodative Federal Reserve, don't think for a moment that rampant inflation can't rear its ugly head. It happens about once in a generation, with the last time being in the late 70's and early 80's. The consumer inflation rate peaked at 14.8% in March 1980, but was uncomfortably high for years before that high, and for several more years afterwards. The market survived it, but stocks' poor performance during that period was exacerbated by the fact that once the market fully recovered in the early 90's, the U.S. dollar had lost about half of its purchasing power thanks to rising prices.

What to do about it: Like bear markets, there's nothing you can do to prevent inflation. There are some things you can do, however, to curb its impact without necessarily accepting sub-par returns on your investments.

The biggest and best move to make in this front is holding onto investments that benefit from inflation. These are primarily commodities, including the ones that don't seem to have any real practical value in daily life. The SPDR Gold Shares Fund (GLD 0.92%), for instance, has been an easy and effective way to hedge against inflation since they debuted back in 2004. A broad-based commodity ETF (exchange-traded fund) like the PowerShares DB Commodity Index Tracking Fund (DBC -0.53%) is another option, offering exposure to everything from gasoline to corn to copper.

Meanwhile, investors ready to hold fixed income instruments -- or bonds -- should consider TIPS, or Treasury Inflation-Protected Securities. These government-issued instruments may not yield much, but the yield is continuously adjusted to reflect consumer inflation rates. You're effectively guaranteed to never lose ground relative to inflation. Individual TIPS can be bought and sold like ordinary bonds, although it's easier to simply own them packaged in an ETF like the iShares TIPS Bond Fund (TIP 0.39%).

4 ETFs to Keep You Invested After Retirement

3 ETFs to Keep You Invested After Retirement

When Waiting for Social Security Is a Huge Win

Inflation in 2014: A Looming Threat for Investors?