There are differences between bonds and bond funds. Be sure you know how they apply to you.

Bonds are often viewed as the safest investment choice. And they are relatively safe, depending on the quality of the bond issuer. They're also straightforward: You buy a bond, collect your interest payments until maturity, and then get your money back.

However, most people who own bonds don't own them directly, but through bond funds such as PIMCO ETF Trust (NYSEMKT:BOND), PIMCO Total Return Fund, Institutional Class (NASDAQMUTFUND:PTTRX), Vanguard Total Bond Market ETF (NASDAQ:BND), and iShares Barclays TIPS Bond Fund (ETF) (NYSEMKT:TIP). If you're investing in bonds in your retirement account, such as an IRA or a 401(k) at work, you're probably investing in a bond fund like one of these.

But owning bonds is not the same thing as investing in bond funds. Let's take a closer look at what's so different about owning a bond versus investing in a bond fund, as well as the difference between bonds and stocks.

Why bond funds are not bonds
If you own a bond, you're relatively assured of getting your capital back. For example, if you invest $1,000 in a five-year bond that pays a 5% interest rate, you'll get your $250 in interest payments during those five years. The daily value of the bond may fluctuate, but if you hold till maturity, you'll get your $1,000 back.

It's a different story when you invest in a bond fund. When you own shares of a bond fund, you have a stake in all of the bonds held by the fund, and share in the interest payments. However, your returns are heavily dependent on the actions of the fund managers. 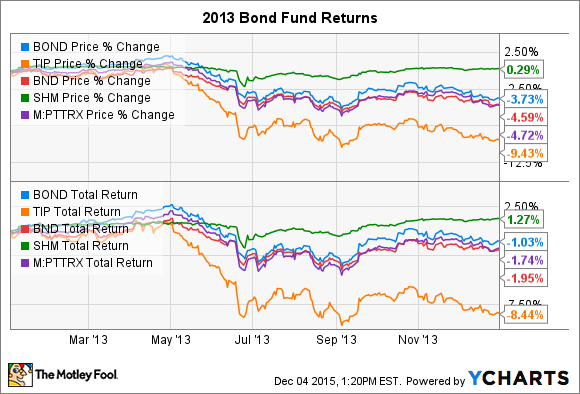 Even with the yields paid factored in, many bond funds were net losers in 2013, a year when interest rates largely went up. In other words, bond funds don't operate based on your individual timeline. If you need to sell your bond fund shares at the "wrong" time, you can lose money, versus owning a bond that expires when you'll need the cash, and redeeming it at face value.

Different kinds of bond funds
Just as there are a lot of types of bonds, such as municipal, federal, and corporate bonds, and bonds that are short term and long term in nature, there are bond funds that only buy and sell particular kinds of bonds. There are actively managed funds -- like the two PIMCO funds above -- with a staff of analysts and experts trying to outperform the market, as well as lower-cost passive bond index funds -- like the Vanguard Total Bond Market and the iShares fund -- which track an index of specific kinds of bonds.

Index bond funds tend to be lower-cost than actively managed bond funds, which have higher expenses, versus a low-cost index fund, which simply invests in a list of bonds based on the index it tracks.

Bond funds versus stocks
Bond funds are more stable than stocks, but stable isn't the same thing as risk free: 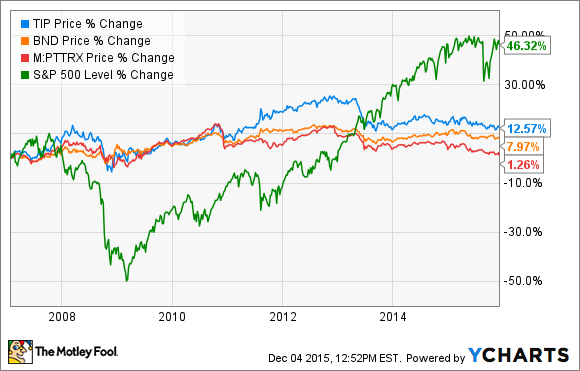 The chart above shows how much more stable the value of bonds was during the financial crisis (between 2008-2010) as compared to the S&P 500, and that, over time, they have posted positive returns. But as you can see, there have been periods where bond funds lost money, though significantly less than stocks over the short term.

Here's a look at total returns: 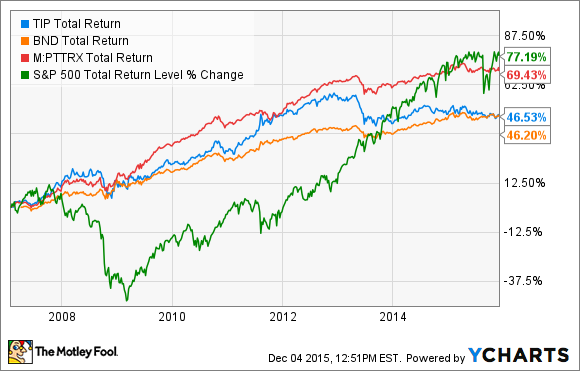 Even from the pre-recession peak, the stock market has outperformed bond funds in total returns, but that shouldn't come as a surprise. Bonds rarely outperform the stock market over the long term, and the past half-decade has been an historically low interest-rate environment, with a strong stock market.

Bonds aren't meant to be growth engines, but tools to limit capital losses while producing some returns. This is critical to understand, because the decision to invest in stocks or bonds shouldn't just be about minimizing risk -- which is often measured by price volatility -- but also about your timeline, and a balance between risk and opportunity for growth. If you're putting money away for retirement in 10 or 20 or 30 years, the higher volatility of stocks is actually your friend because of the better historical returns of stocks versus bonds.

But if you're investing money that you'll be spending in the next several years, bonds and bond funds offer stability and less risk of big losses.

Buyer beware
Investors should be wary when it comes to bond funds. As interest rates rise, bonds lose value because the yield they pay is less than newly issued bonds. This isn't a problem if you hold the bond till maturity and get full redemption. But if you own shares of a bond fund, your timeline puts you squarely exposed to interest rate risk.

Remember the chart above that showed 2013 bond fund returns? That's the short-term risk you're exposed to with bonds. And it's looking almost certain that rates are set to start rising again, and they could keep going up for years.

Does that mean investors should avoid bond funds completely? It depends on your situation. If you're a long-term investor still years away from retirement, stocks have been a much better historical investment, and that's unlikely to change. If you're looking for a way to protect your capital for a year or two, bond funds are not guaranteed, and you could be exposed to short-term losses. Buying a short-term bond on the secondary market and holding it till maturity might be a better bet.