Please ensure Javascript is enabled for purposes of website accessibility
Log In Help Join The Motley Fool
Free Article Join Over 1 Million Premium Members And Get More In-Depth Stock Guidance and Research
By Jeff Little – Jun 23, 2021 at 7:50AM

A new FDA-approved product with the potential to triple weight loss in obesity patients should be a huge win for the company.

Obesity among U.S. adults has grown from 15% of the population in 1990 to 40% now. And of the 35% of children considered overweight in the U.S., 19% are obese. Drugs on the market such as Saxenda, from Novo Nordisk (NVO -0.76%), help with weight management for the obese, and the company has dedicated efforts to improving on the 5% average weight loss among those who have used the drug.

Those efforts may pay off very soon for patients and investors alike. A once-weekly injectable treatment that can increase the amount of weight loss by three times that of Saxenda is now available. 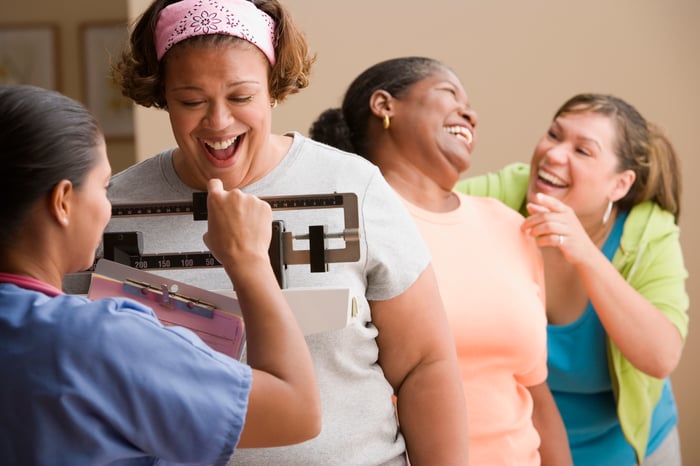 On June 4, Novo received FDA approval for its new, and potentially game-changing, weight loss management drug. Wegovy is a first-of-its-kind, once-weekly injectable used for chronic weight management in obese adults, intended to be used in conjunction with diet and exercise.

In successful clinical trials, Wegovy proved to increase the amount of weight loss to triple that of Saxenda, resulting in 17% to 18% weight loss over a 68-week period. Some patients lost upwards of 20% of their weight.

The company is wasting no time in launching the product, either. Upon approval, Novo presented the debut of Wegovy on June 10 and was expected to become available on pharmacy shelves as soon as June 18, marking a stunning two-week turnaround from product approval to availability.

Novo executives met the success of clinical trials and ensuing approval with great excitement. Martin Holst Lange, executive vice president of development, proclaimed "a new era in the treatment of obesity," and Camilla Sylvest, head of commercial strategy and corporate affairs, noted that this was the fastest Novo launch ever following approval.

As the leading weight-loss drug on the market, Saxenda generated $920 million last year for Novo, at a list price of between $1,300 and $1,600 per month per prescription. The company expects Wegovy to have a similar list price, and it's looking to double its obesity drug sales by 2025 based on 2019 numbers.

To drive sales and increase market share, the company is looking to work with physicians to further address obesity as a chronic disease that requires medication rather than one being treated primarily by diet and exercise, with less emphasis on prescriptions. The company is also expected to address patients directly, though it hasn't yet shared what that process would look like.

Novo may face two obstacles on the way to growing revenue through its weight-loss drugs. The first is with insurance coverage. Neither private nor public insurers tend to cover weight-loss drugs because obesity is seen more as a lifestyle outcome than a chronic disease. Thus, some patients who could benefit from the drugs will never get them. To offset this obstacle, the company plans to offer a $25 copay card for patients who have insurance carriers that cover medications aimed at fighting obesity.

The second battle will be internal, as Novo will probably see some overlap between Wegovy with Saxenda. The company intends to address that issue by focusing on providing Wegovy to new patients, while suggesting that patients already using Saxenda stay that course for now.

Although Novo does provide a single-dose delivery device along with the medication, the company is planning for a more convenient way of dosing later this year. Its aim is to kick off new trials to assess the safety and efficacy of an oral 50 mg dosage for patients, rather than requiting an injection.

According to Novo and health experts, including the Mayo Clinic, obesity is shown to cause or worsen more than 60 health conditions, including Type 2 diabetes -- a major focus for Novo Nordisk -- heart disease, and depression. The good news for Novo is that obesity is acknowledged as a chronic disease among leading health organizations, including the American Medical Association and Centers for Disease Control and Prevention. Over time, this perspective could provide a catalyst for more coverage among insurance payers, leading more patients and physicians to look toward Wegovy as a solution.

In an obesity market where Novo owns a 60% global share and 80% in North America, the future bodes well for this pharmceutical. The obesity market is projected grow by 15% annually through 2026, resulting in an estimated value of $4.2 billion. These factors, combined with an anticipated post-COVID-19 rebound in patient visits to doctors, and a product that offers the potential for obesity patients to triple their weight loss, should set up Novo Nordisk, its patients, and investors nicely for the future.