Please ensure Javascript is enabled for purposes of website accessibility
Log In Help Join The Motley Fool
Free Article Join Over 1 Million Premium Members And Get More In-Depth Stock Guidance and Research
By Harsh Chauhan - Jun 24, 2021 at 6:20AM

The iPhone maker can win big from this lucrative market, where 5G mobile connections have yet to hit critical mass.

Apple (AAPL 0.88%) is ruling the sales charts in the 5G smartphone era thanks to its huge installed base of users running older devices. These loyal customers have been buying the competitively priced iPhone 12 models hand over fist. The smartphone giant occupied first place in the 5G smartphone sales rankings in the first quarter of 2021 by a wide margin, which sent its quarterly iPhone revenue to $48 billion from $29 billion in the year-ago quarter.

The iPhone product line should keep driving such impressive growth for Apple for a long time to come as more users make the jump to 5G technology. But at the same time, the 5G-equipped iPhones put Apple in a solid position to make a dent in markets where the new technology standard is yet to be rolled out. One such example is India, where Apple is already making explosive progress that could be amplified by the roll-out of 5G networks. Let's see why that may be the case. 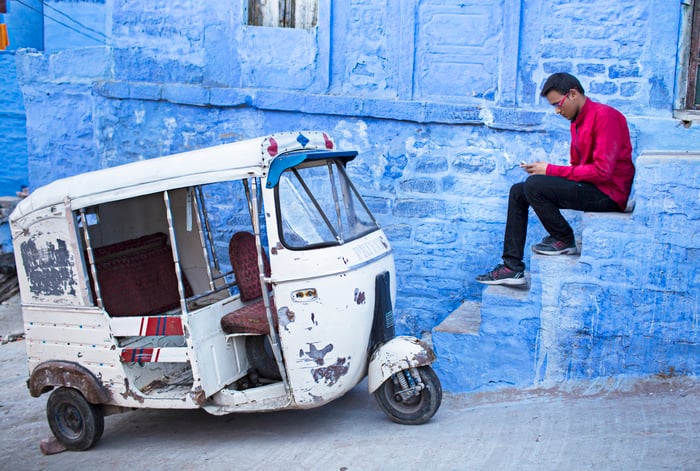 India is about to jump on to the 5G bandwagon

The Ericsson Mobility Report estimates that 5G will account for 26% of India's mobile subscriptions by the end of 2026. The total number of 5G subscriptions is expected to hit 330 million at the end of the forecast period. It is worth noting that 5G telecom networks are yet to be launched commercially in the country, with telecom carriers having started trials just recently.

Overall mobile subscriptions in India could hit 1.2 billion by the end of 2026. So the 5G market will have a lot of room for growth even after five years. That's not surprising, as the country currently boasts 680 million 4G subscribers, which could increase to 830 million by 2026. As such, the 5G upgrade cycle could last for an exceptionally long time in India. That bodes well for Apple, which has a lot of time on its hands to fine-tune its strategy to attack this market.

Apple has recorded blistering sales growth in India over the past couple of quarters. The company doubled its smartphone market share in India in the fourth quarter of 2020 to 4% with shipments of 1.5 million units, according to Counterpoint Research.

Apple is building upon that success in 2021. Counterpoint Research estimates that Q1 iPhone shipments increased a whopping 207% year over year in India and exceeded 1 million units once again. That was way better than the overall smartphone growth of 19% India recorded during the quarter to 38 million units. More importantly, Apple was the top smartphone player in the premium smartphone segment (devices priced above $400) with a share of nearly 48%.

This is great news for Apple for a couple of reasons. First, the average selling price (ASP) of smartphones in India is increasing as consumers have already started buying 5G devices. IDC points out that smartphone ASP in India increased 3% year over year in Q1 2021 to $176; 7% of the overall shipments were 5G smartphones.

Second, the advent of 5G is driving the growth of premium devices. IDC estimates that the premium smartphone segment in India recorded 143% year-over-year growth in Q1, and 71% of the devices shipped in this segment were 5G-enabled. Apple's iPhone 11 and iPhone 12 cornered a substantial chunk of this market with 28% of premium shipments.

As 5G networks become ubiquitous in India in the coming years and push up the price of smartphones, the market for premium devices is likely to expand. IDC estimates that global 5G smartphone ASP would hit $404 in 2025. For comparison, overall smartphone ASP is expected to hit $363 this year.

The cheapest iPhone 12 model in India is currently being sold for 63,900 Indian rupees (roughly $861). However, consumers can get it for a sizable discount that brings the price closer to $700 after offers and trade-in through Apple's online store (though conditions apply). As such, the company has already prepared the groundwork to lure new customers into its fold in India in the 5G era.

Supply chain gossip indicates that Apple could lower the barrier to entry by releasing a 5G-enabled iPhone SE priced around $499 in early 2022. Such a move is likely to further galvanize Apple's terrific growth in India and pave the way for 5G dominance in the country.

Apple pulled in $1.85 billion in revenue in India in fiscal 2020, an increase of 29% over the year prior. I wouldn't be surprised to see the company deliver yet another year of outstanding growth given the pace of iPhone sales.

Of course, that sales number shows that India is still a minuscule portion of Apple's trailing-12-month revenue of $325 billion, but there is a strong possibility of the country accounting for a much bigger share in the long run. There's still time for investors to win off of Apple's red-hot momentum, which seems sustainable on the back of 5G deployment and the long-term opportunities associated with it.