Please ensure Javascript is enabled for purposes of website accessibility
Log In Help Join The Motley Fool
Free Article Join Over 1 Million Premium Members And Get More In-Depth Stock Guidance and Research
By Bram Berkowitz - Updated Jun 25, 2021 at 10:47AM

You may not think about LendingClub when talking about top brands, but the company is incredibly good at satisfying its customers.

But when it comes to customer satisfaction and loyalty, LendingClub has actually shown that it is better, at least among its existing customer base, than even these two juggernauts. It's another reason why I am very bullish on LendingClub stock -- but let me explain this seemingly bizarre comparison.

I am not going to sit here and tell you that LendingClub is more of a household name, or even holds a fraction of the brand power as Apple and Starbucks. That simply wouldn't be true. Apple and Starbucks have many more customers, have sold more products, and are again much more well known than LendingClub, which is mainly in the business of originating personal loans online.

But among existing customers, LendingClub commands more brand loyalty, according to a metric called the net promoter score (NPS). The NPS measures a customer's inclination to return and make repeat purchases with the same company, and also recommend the company to others. Scores above zero are common and scores above 50 are excellent. In a presentation earlier this year, LendingClub said that it had an NPS of 79, beating out Apple and Starbucks, which have strong NPS scores of their own (Starbucks is slightly below LendingClub, while Apple's is over 50). Considering how many cups of coffee the average Starbucks customer must purchase in a given year, this is quite an impressive achievement for LendingClub. 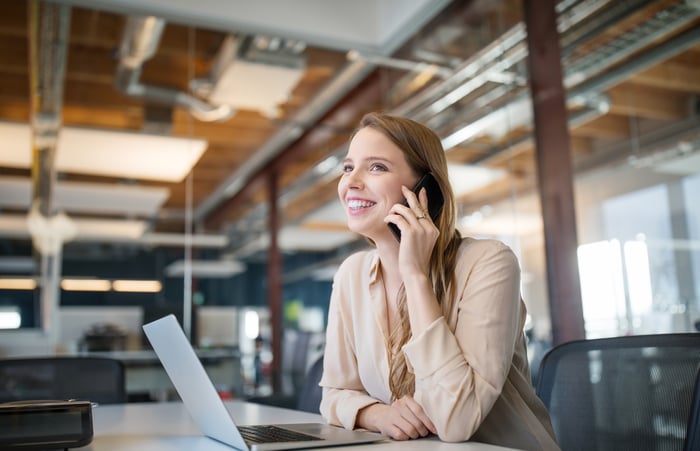 Now, it's fair to ask how this can be, but LendingClub has actually been around for a while. The company made the largest tech initial public offering in 2014 and was the largest peer-to-peer lender in 2015, having originated some $16 billion of loans through its platform through that year. At one point in 2014, shares had reached $128. The company then got caught up in a scandal in which it allegedly sold loans to an investor that did not meet the company's credit criteria, ultimately leading to the resignation of its CEO at the time.

But even after the scandal, and as shares have struggled in recent years, LendingClub has remained popular among its customers. The company today boasts 3 million members, and through February of 2021 had done $60 billion in lifetime originations. Current CEO Scott Sanborn also recently said that half of the company's customers come back for repeat business within five years of taking a loan. This is quite impressive, considering most loans at LendingClub are for three years.

Additionally, once LendingClub fully transitions to its new model and strips out one-time, non-recurring costs, I think you are going to see strong earnings. For instance, analysts on average expect LendingClub to generate more than $814 million in revenue in 2022. And this likely doesn't even cover the cross-selling potential of having a loyal customer base. LendingClub is going to roll out a checking account and many other products that should be somewhat easy to sell to its existing customer base.

In addition to looking at the NPS compared to powerful brands like Apple and Starbucks, I also think it's helpful to look at it compared to others in the financials services sector, because after all, a loan is a little different from a smartphone or cup of coffee. In this regard, LendingClub wallops its competition, with the average NPS in the financial services sector being 35.

Let's also compare LendingClub, which now holds a traditional bank charter, to another bank that customers love: First Republic Bank. First Republic Bank has an overall NPS of 73, and it really is one of the best banks when it comes to pleasing its customers -- in fact I see customer service and satisfaction as one of the bank's strategic advantages. For instance, between 2015 and 2020, roughly 60% of First Republic's loans were made to existing customers. Why is this so helpful? Because the bank knows these customers a lot better than brand new customers, meaning it can better predict default rates and originate loans with higher credit quality. This is perhaps one reason why First Republic has always had pristine credit quality.

Additionally, First Republic during this same time period originated another 28% of loans to customers that were referred by prior clients -- word of mouth and reputation is still incredibly powerful. For its strong earnings performance, driven by customer service and retention, investors have rewarded First Republic with an industry-leading valuation above 300% tangible book value (equity minus goodwill and intangible assets).

While LendingClub is now a bank like First Republic and is similar in the sense it originates loans to existing clients using superior technology, I don't think it will ever really be valued like a bank. LendingClub is more of a fintech, in my opinion, and fintechs tend to be really good at building a customer base, so many tend to have a strong NPS. But even if you compare LendingClub to another strong fintech player like Upstart Holdings, an artificial-intelligence-powered platform that partners with banks to help them grow personal loans, both have an NPS of 79. The only difference is Upstart currently has a market cap over $9 billion, while LendingClub's currently sits under $2 billion.

LendingClub's high NPS and success with its customers is another big reason to like the stock right now. Despite the company's past troubles, it has always had a great relationship with its customer base, one that is much stronger than the financial services as a whole, as well as big brands like Apple and Starbucks. Strong customer service can translate into strong financials because happy customers come back for repeat business and tell their friends about LendingClub. LendingClub is also a completely different company than it was. It bought Radius Bank and now has a whole new business model, which I've written about in the past.

The NPS is just another reason why I think the LendingClub is undervalued right now. It has the same NPS as Upstart and is trading at less than a fourth of the market cap, which is why, despite the strong performance this year, I still think LendingClub can be a multibagger over the next few years.