At long last, there's a date for the merger with the EV start-up Faraday Future.

Shares of special-purpose acquisition company Property Solutions Acquisition (PSAC) were trading sharply higher on Friday, after the company said that it has set a date to finalize its merger with electric-vehicle start-up Faraday Future.

As of 1 p.m. EDT today, Property Solutions' shares were up about 8.9% from Thursday's closing price.

Property Solution said that it will hold a special meeting of shareholders to approve the merger on July 20. Assuming the deal is approved (which is very likely), the merged company will adopt the Faraday Future name, and its stock will begin trading under the ticker symbol FFIE shortly thereafter.

Investors who held shares of Property Solutions as of June 21 will be eligible to vote. 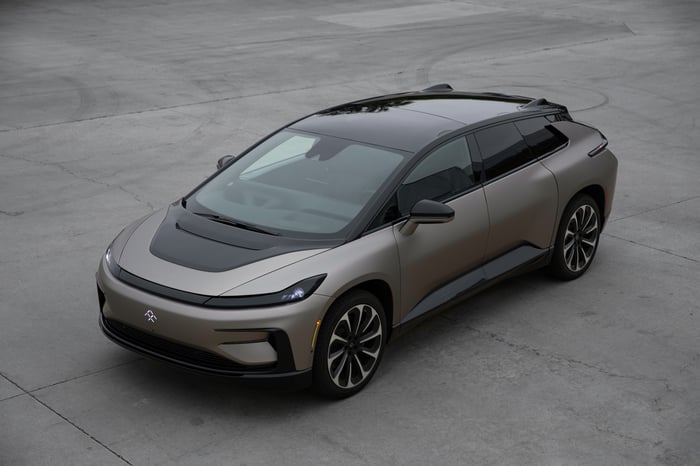 Faraday's FF 91, first shown in 2017, could finally be headed for production in a year or so. Image source: Faraday Future.

The deal includes a $775 million private investment in public equity (or PIPE) funded by outside investors including Chinese automaker Geely Automobile Holdings (GELYF 0.99%), and about $230 million in cash held by Property Solutions.

In a statement, Faraday CEO Carsten Breitfeld said that the cash from the deal -- about $1 billion before fees -- will help the company finally get its FF 91 electric luxury sedan into production.

I say "finally" because Faraday has been on EV investors' radar since early 2016, when it made a big splash at the Consumer Electronics Show in Las Vegas. But it subsequently burned through $2 billion, nearly went bust, lost a co-founder and most of its early employees, and struggled until Breitfeld arrived from BMW to right the ship in 2019.

Assuming the deal closes as planned, the FF 91 really could be about a year away from production. But with rival Lucid Motors' Air arriving this fall, and new high-end electric luxury sedans on the way from major players including Mercedes-Benz and General Motors' Cadillac, Faraday could find itself facing stiff competition. Given that its track record doesn't exactly inspire confidence, I'd encourage you to be careful with this one.