Shares of Property Solutions Acquisition (NASDAQ:PSAC), a special-purpose acquisition company (SPAC), surged on Monday after a report that it may be close to a merger deal with electric-vehicle start-up Faraday Future.

Bloomberg reported that Property Solutions is in talks to merge with Los Angeles-based Faraday Future in a deal that would take Faraday public at a valuation around $3 billion.

According to the report, Property Solutions is working to raise roughly $400 million, apparently the amount needed to make the merger deal happen. Faraday has said that its luxury electric vehicle, the FF 91, could be in production in about a year after it raises additional capital.

Many analysts thought Faraday could emerge as a Tesla competitor after the company's impressive presentation at the Consumer Electronics Show in 2016. But after unveiling the FF 91 a year later, Faraday's momentum stalled as co-founder Jia Yueting racked up debt while trying to build a business empire in China, and many early Faraday employees left. 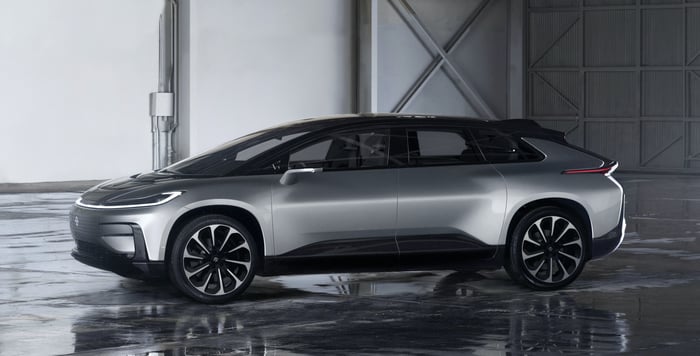 Faraday's FF 91 was hyped when it was first revealed in 2017. Faraday is hoping to finally get it into production next year. Image source: Faraday Future.

Faraday is now led by a former BMW executive, Carsten Breitfeld, and it appointed former FOX Factory Holding chief financial officer Zvi Glasman as its CFO just last week. While auto investors should be cautious here -- the deal isn't yet official, and things could change quickly -- it does appear that Brietfeld is assembling the pieces needed to finally get the FF 91 into production.