Please ensure Javascript is enabled for purposes of website accessibility
Log In Help Join The Motley Fool
Free Article Join Over 1 Million Premium Members And Get More In-Depth Stock Guidance and Research
By Will Healy - Jun 30, 2021 at 7:15AM

Despite both identifying as communications companies and both offering subscription services of some type, Spotify Technology (SPOT -4.95%) and Verizon Communications (VZ -1.00%) operate vastly different businesses. One provides music and podcasts through a streaming service, while the other offers telecommunications services.

This difference also holds tremendous implications for investors, as they must determine which company has positioned itself to deliver higher potential returns. Let's take a closer look at each company to help make the determination of which is the better buy right now.

The differences between the two companies go well beyond their roles in the media industry. Both also deal with vastly different conditions competitively. The nature of Verizon's business gives it a competitive advantage in the 5G realm. The cost of building such a telecommunications network will discourage others from competing with it and its rivals AT&T and T-Mobile US. Verizon spent approximately $18 billion in capital expenditures in each of the last two fiscal years to maintain and expand this competitive moat. 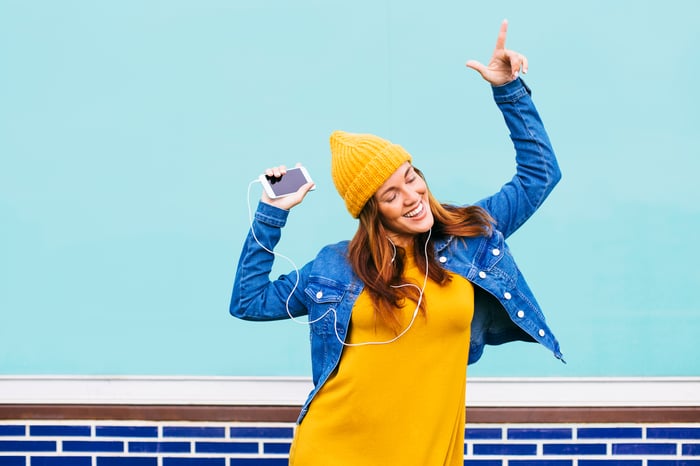 In contrast, Spotify, which supports a $50 billion market cap, operates from a significant disadvantage. It must compete not only with Sirius XM, but also tech giants like Apple and Amazon, each of which has built a market cap surpassing $1.7 trillion.

For this reason, Spotify has had to fight to hold onto a competitive moat. To its credit, it has managed to grow its business, namely through content deals with the likes of Samsung, and by the development of proprietary content. Consequently, it spent only 24 million euros ($29 million) on property and equipment in the first quarter of 2021 and 78 million euros ($93 million) in fiscal 2020.

Hence, while its competitive moat may not compare to one built by spending tens of billions every year on infrastructure, the competitive edge it holds comes at a substantially lower cost.

Those lower infrastructure costs may help explain why Spotify has posted faster growth. In Q1, Spotify increased its revenue by 16% versus year-ago levels to more than 2.1 billion euros ($1.76 billion). Also, a profit of 23 million euros ($19.3 million) led to the company generating 41 million euros ($34.4 million) in free cash flow.

Nonetheless, Verizon has shined on the cash flow front. It reported $5.2 billion in free cash flow in Q1 and $23.6 billion in 2020. Thanks to these cash flows, shareholders receive $2.51 per share annually in dividends, a return of 4.5%. Also, that payout has increased every year since 2007. This helps Verizon win with income-oriented investors as Spotify does not pay a dividend.

Instead, Spotify stock has outperformed Verizon through stock returns -- at least over time. Since Spotify's IPO in April 2018, its stock price has risen by almost 80% versus just under 20% for Verizon.

In contrast, Verizon's stock seems to only perform better in broader economic downtrends. Year to date, Spotify has fallen by 15% compared to a 4% drop for Verizon. 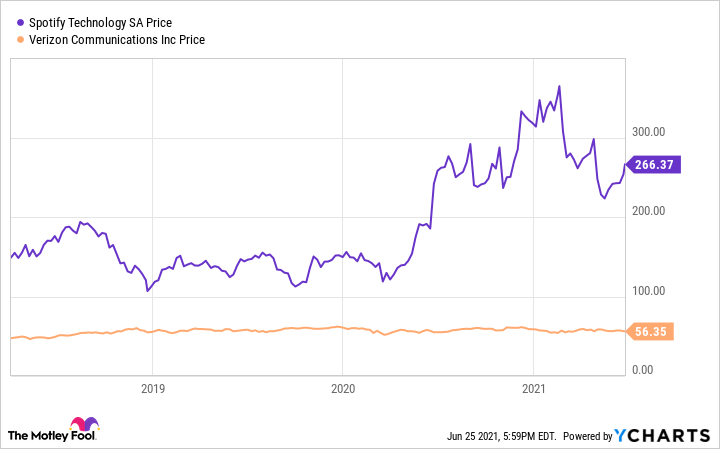 Spotify also has remained the more expensive choice. New Spotify investors will pay just over five times sales compared to the price-to-sales (P/S) ratio of just under two for Verizon. Hence, while stockholders could continue to see substantially faster growth in Spotify, its investors will have to pay a premium.

Much like these two companies operate differently and serve different customers, they also appeal differently to types of investors. Spotify carries with it more risk but also more potential for long-term returns, thus being more appealing to growth investors out there. Key deals and proprietary content have helped it thrive in the face of intense competition from the biggest companies in tech. The fact that it now turns a profit and has consistently delivered positive cash flows speaks to its ability to succeed.

If I had to choose which is the better buy between the two, however, those seeking higher stock price returns will probably earn more considerable gains from the much younger and still growing Spotify.