Please ensure Javascript is enabled for purposes of website accessibility
Log In Help Join The Motley Fool
Free Article Join Over 1 Million Premium Members And Get More In-Depth Stock Guidance and Research
By Leo Sun - Jun 5, 2021 at 12:13AM

This dusty old dividend stock is still a good investment for certain investors.

Verizon (VZ 0.53%) is often considered an evergreen defensive stock. It owns the largest wireless network in America, it pays a high forward dividend yield of 4.4%, and the stock trades at just 11 times forward earnings. It's also raised its dividend annually for 14 straight years.

However, Verizon has also consistently underperformed the market. After factoring in reinvested dividends, it's generated a total return of about 150% over the past 10 years. That beats AT&T's (T 1.09%) total return of less than 70%, but it's roughly half of the S&P 500's total return of nearly 300%.

Past performance isn't a reliable indicator for future gains, but investors might look at Verizon's past returns and wonder if it's smarter to simply buy a low-cost index fund that tracks the S&P 500 instead. Let's take a fresh look at Verizon's business and see if its stock is still worth buying today. 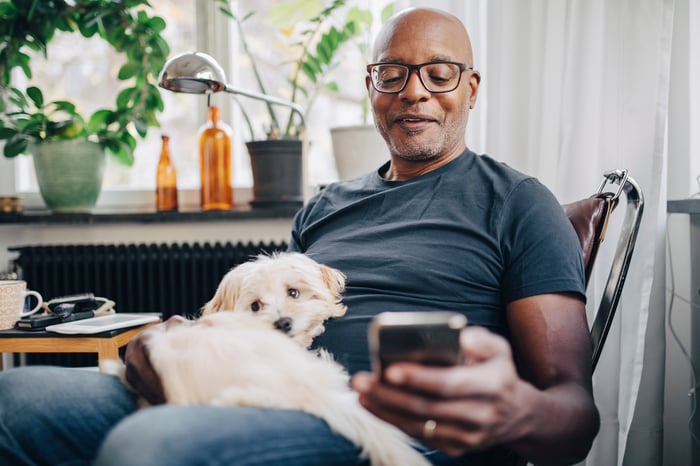 Verizon has three main strengths. First, its core wireless business, which is split across the consumer and enterprise markets, serves more customers than T-Mobile (TMUS -0.63%) and AT&T. As the market leader, Verizon can spend less money on big marketing campaigns and network upgrades.

Second, Verizon didn't bite off more than it can chew with big pay TV and media acquisitions, as AT&T did with DirecTV and Time Warner. Verizon almost tumbled down the same slippery slope with its ill-fated purchases of AOL and Yahoo's internet assets, but those failures cost much less than AT&T's failed attempt to merge its ISP, pay TV, and media segments into a vertically integrated business. Verizon recently agreed to sell 90% of those media assets to Apollo Global Management (APO).

Lastly, Verizon's pay TV business -- which is bundled with its Fios wireline and broadband internet business, which served 13.3 million customers last quarter -- is also much smaller than AT&T's pay TV segment. Therefore, it's less exposed to cord cutters and the secular shift toward streaming services.

Verizon's strengths make it a better buy than AT&T, but it also has three weaknesses. First, T-Mobile surpassed AT&T as the U.S's second-largest wireless carrier after it merged with Sprint last year.

Fresh competition from T-Mobile -- which promotes an "un-carrier" strategy of eliminating contracts, subsidized phones, data coverage fees, early termination fees, and other hassles -- could reduce Verizon's pricing power and force it to ramp up its marketing expenses again.

Based on these facts, growth-oriented investors might prefer to buy T-Mobile's stock, which has rallied more than 760% since its public debut nearly eight years ago.

Lastly, Verizon's long-term debt has soared over the past decade. It accumulated most of that debt after buying out Vodafone's 45% stake in Verizon Wireless for $130 billion in 2014. 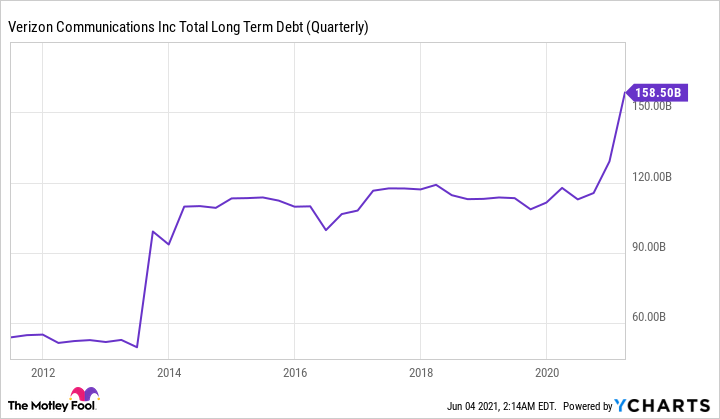 Verizon ended last quarter with a net unsecured debt-to-adjusted EBITDA ratio of 2.9. It expects to reduce that leverage slightly to 2.8 times by the end of 2021, but that high debt could prevent it from making all the necessary investments to stay ahead of T-Mobile and AT&T.

Not a bad stock, but not a great one either

Verizon's operating revenue dipped 3% in 2020 as the pandemic curbed demand for new phones and its pay TV and ad segments floundered. However, tighter spending boosted its adjusted EPS by 2%.

Analysts expect Verizon's operating revenue and adjusted EPS to both increase about 4% this year as customers buy new 5G devices and upgrade to new fiber plans. The divestment of its media assets to Apollo should also greatly reduce its exposure to the saturated digital media and ad industries.

Its free cash flow, which rose 32% to $23.6 billion last year, should also easily cover its dividends as it reduces its debt. Simply put, Verizon's business should remain stable for the foreseeable future.

Therefore, Verizon is still a decent investment for investors who merely want to preserve their capital and beat inflation, and aren't too concerned about beating the market. However, investors who do just a little more homework can probably find more promising stocks or ETFs that regularly beat the market.