Please ensure Javascript is enabled for purposes of website accessibility
Log In Help Join The Motley Fool
Free Article Join Over 1 Million Premium Members And Get More In-Depth Stock Guidance and Research
By Jeff Little - Jun 30, 2021 at 6:15AM

If production setbacks can be avoided, gains should be in sight.

In February 2020, Horizon Therapeutics (HZNP 3.88%) launched what would become a successful drug in its arsenal of rare disease treatments: Tepezza, a treatment for thyroid eye disease. Little did Horizon know that the COVID-19 pandemic was about to rule almost every aspect of our lives for more than a year, eventually leading to a dismal first quarter 2021 of revenue generated by the product.

For the three quarters after March 2020, Horizon's newest launch was welcomed in the medical community with open arms. So much so that it generated $800 million in revenue during 2020. But not all was going exactly as planned. While the launch went off well for Tepezza. COVID-19 was wreaking havoc across businesses and society, and ultimately that impact would hit Horizon. 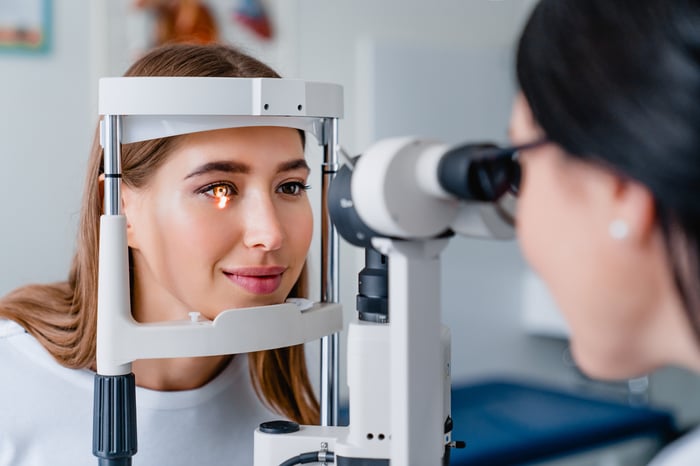 A double dose of setbacks

The first setback hit Horizon when restrictions applied by state and federal governments resulted in offices being closed and medical appointments being canceled. When faced with the shut down of ophthalmologist offices, the company acted quickly by going straight to consumers, which could be considered an unusual move so soon after launch, but was necessary in an unusual global environment.

Horizon's direct-to-consumer ads were highly effective, attracting 1 million visits to its dedicated websites. Knowing its audience -- patients suffering from vision problems -- the company provided an audio option for visitors to have material read to them. It also provided a font specially designed for those with impaired vision.

Fast-forward to December 2020. The world was on the cusp of vaccines being readied for widespread use. Then the second setback hit Horizon. The government ordered Horizon's manufacturing partner, Catalent (CTLT 1.06%), to designate its production schedule and facilities to assist with turning out much-needed vaccines. The scheduled production slots for vials of Horizon's Tepezza were immediately put on hold. Fortunately, 60% of the online website visitors were hitting the pages at that time thanks to its ad campaign running nationally. Horizon was able to keep the medical community and consumers interested while building awareness of Tepezza for when production would eventually ramp up again.

The impact of the sidetrack for Horizon's partner, Catalent, resulted in an implosion of revenue for Horizon, down to a mere $2.1 million for a dismal full first quarter of sales for Tepezza. For comparison, Horizon had brought in over $340 million from sales of Tepezza in the fourth quarter of 2020.

Vision is clearing up

Finally, this past April, the company got good news. The U.S. Food and Drug Administration (FDA) approved Horizon to pump out more vials per batch of Tepezza, but not before the entire first quarter had gone by. Now, six months after the December disruption to production, a rebound may be under way.

In early June, the company attended the Jefferies Healthcare Conference, where it stated that 75% of patients who had put treatment on pause had been restarted or scheduled to resume. This reflected a 50% increase over the month of May. The company also noted in the meetings with Jefferies analysts that April was the best month ever for newly enrolled patients since the launch of the product in February 2020. According to one Jefferies analyst, David Steinberg, the drive behind the boost in new patients was a combination of rising awareness of Tepezza and its effective direct-to-consumer advertising.

As a response to the setbacks resulting from uncontrolled partner manufacturing logistics, management is making more moves to help avoid such issues in the future. Horizon is spending $65 million to acquire a manufacturing plant from OPKO Health's EiraGen Pharma. The newly acquired facility is located in Ireland and is equipped with a filling line and freeze dryer for use in production of multiple rare disease meds, including Tepezza. There is also land available close by should the company choose to expand. As part of the acquisition plan, Horizon will be keeping around 40 current EirGen staff and intends to increase headcount by 50 by 2024.

Horizon may face some potential setbacks down the road involving the total price for a course of medication. The cost is around $14,900 for a 500 mg dosage, resulting in a list price of approximately $200,000 for a six-month course. But it has been suggested by the Jefferies analyst that the cost to the average patient is more in the neighborhood of $350,000, and getting as high as $500,000 with heavier usage.

Fortunately, the cost may not become a deterrent if the drug continues to produce successful results for patients. Jefferies found that after offering patients a competitor product trial, the trial ended as a result of not enough participants due to the success of Tepezza. This led to a note by Steinberg that the company should benefit on sales of Tepezza for at least five years before any potential competition, such as immunovant might be available. Immunovant is currently in phase 2B trials, which consists of evaluation and assessing efficacy. There are three phases that take place before FDA approval, and once that happens, it may take a few more years before a drug is commercially available. .

The company certainly hopes that five year estimate holds true. First-quarter earnings came in at $0.03 but missed analyst estimates by $0.04, a 57% surprise miss. Having said that, the previous three quarters all came in beating analyst estimates, and with the vaccine production sidetrack from the first quarter out of the way, it's looking more like the road to recovery from a brief setback is well under way.

It will be interesting to see how the second quarter plays out for the company. The next earnings call is expected around August 4. If the company can fend off any unexpected competition and continue to beat earnings estimates, this stock could be a great buy and reward investors for a long time. Just be aware that the share price has climbed very rapidly since the start of the pandemic, going from $32 in January 2020 to today's price hovering at $95 -- just short of its recent all-time high.

For those looking long term, this pharmaceutical investment could provide a great buy opportunity if analyst David Steinberg is correct in his reiteration of a buy rating and a $120 share price target. If that's not enough to pique investors' interest, it might be worth noting that four analysts follow Horizon and all have a price target between $118 and $125. That's potentially a minimum 24% gain no matter how you slice it.

Does 2021's Best Biopharma to Work for Belong in Your Portfolio?