While streaming services saw a huge uptick in viewers during 2020, it seems not everyone is streaming video to their television sets. A new study from media and entertainment analyst Interpret found half of consumers planning to buy a smart TV or streaming device over the next three months will be making their first such purchase. 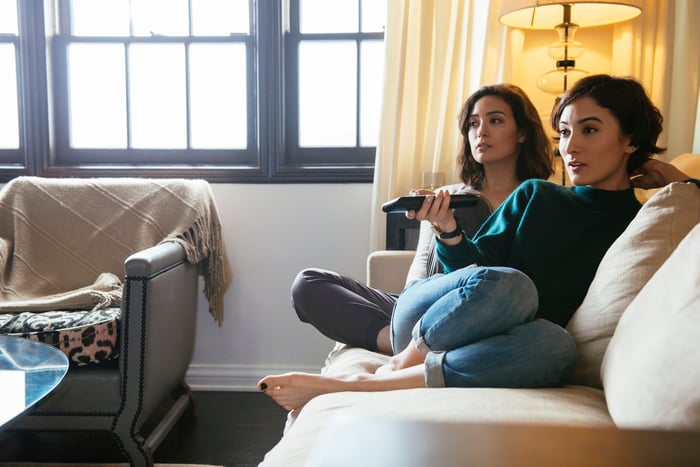 Roku could be a huge winner

Roku is the most popular smart-TV operating system in the United States, accounting for 38% of all such TVs sold in 2020. It also makes the most popular streaming devices in the U.S., besting Amazon's (NASDAQ:AMZN) Fire TV devices. Amazon's devices are, however, more popular in international markets.

Interpret also found that Roku users are among the most satisfied with their existing devices. Just 18% of device owners plan to replace Roku. Samsung TV owners are the only group more loyal, with just 17% planning to buy a new TV. Additionally, 18% of Vizio TV owners plan to upgrade their devices. But Roku sells both media players and smart TVs, unlike most of its competitors.

There's no reason to think consumer behavior will change much in 2021. And with so many first-time purchasers, Roku should see another year of very strong user growth.

Spending on connected-TV advertising will accelerate

As more consumers pick up streaming devices for the first time, they'll be streaming content for the first time. Many of them will also be new cord-cutters. The broader audience and increased engagement open more advertising opportunities among streaming platforms and ad-supported video on demand (AVOD) services.

Analysts at eMarketer already estimated an acceleration in the growth of connected-TV advertising in 2021, after COVID-19 temporarily depressed ad spend across the board in 2020. But a growing number of new connected-TV users could lead to even faster acceleration.

The Trade Desk operates an ad-buying platform for all sorts of digital advertisements, but its growth in recent years has stemmed largely from connected TV. It's releasing a new platform this month that promises better measurement tools for digital advertisers, particularly for connected-TV campaigns.

YouTube's connected-TV audience is massive and growing. The service has its own ad-buying tools, and it's popular enough that it can avoid most platform revenue-sharing agreements of other AVOD services. Google also has a stake in the connected-TV device industry with Android TV.

Investors most interested in capitalizing on the growing trend toward connected TV ought to look at Roku and The Trade Desk. While other companies have considerable exposure to the industry, giant tech companies like Alphabet and Amazon aren't nearly as concentrated in the business. That said, investors will pay a premium for shares of the smaller growth stocks versus their larger competitors.