IBM (NYSE:IBM) just had its best quarter in years. The old-school tech titan posted very modest overall revenue growth during the second quarter of 2021, but an acceleration in its cloud computing business led by its flagship Red Hat, which it acquired back in 2019. For investors looking for income, IBM is a great dividend play right now, and there's a promise of more robust growth once the spinoff of Kyndryl is complete by the end of this year.

1. Cloud sales are underrated at IBM

IBM's total revenue was up just 3% year over year in Q2 to $18.7 billion. And with the first half of the year now in the books, sales are up 2% to $36.5 billion. Nothing to write home about given the fast-growing digital era we live in, but not terrible for IBM given that it's been stuck in stubborn decline for years.

However, lurking under the surface and helping IBM regain positive traction is its massive cloud computing segment. Total cloud sales were up 13% from a year ago to $7 billion, led by a reported 20% increase in cloud services provider Red Hat. In fact, Red Hat accelerated from the pace it was setting over the last year.

In fact, this strong showing from the cloud segment is the primary reason IBM is spinning off its managed infrastructure segment (which we now know will be called Kyndryl). While tech infrastructure equipment is still an important segment of IT, it isn't an area of growth. It also offers a lower profit margin than cloud software. So the new IBM will be more focused on its cloud business, which should help it reach a higher rate of growth and earnings generation potential once the spinoff is complete by the end of this year. 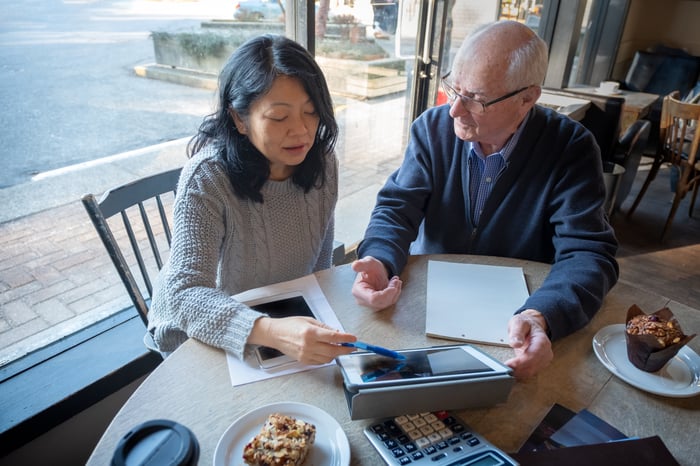 Of course, between now and the time when the new cloud-focused IBM emerges, this is first and foremost a dividend stock. And when it comes to paying dividends, it's all about free cash flow generation. On this front, IBM is doing well. Through the first six months of the year, free cash flow was $2.56 billion, handily covering the $1.47 billion it paid out in shareholder dividends.

Granted, $2.56 billion is quite a bit less than the $3.65 billion in free cash flow generated during the first half of 2020. What gives? For one thing, IBM has spent $1.22 billion so far in 2021 on one-time charges related to organizing the spinoff of Kyndryl. Backing out that amount, free cash flow would have been up 4%. IBM has also spent $2.87 billion on cash acquisitions so far this year. It's purchased nine small software and consulting outfits since January to help bolster its cloud presence. Further backing out those acquisition-related expenses, IBM would have reported an impressive 81% year over year free cash flow increase during the first half of 2021.

When it comes to tech giants, the leaders of the industry (like the FAANG stocks) are flush with net cash positions. Not so at IBM. More than a century old, it has far more debt than it does cash, ending Q2 with $7.35 billion in cash and equivalents and another $600 million in marketable securities but with $55.2 billion in debt.

It's far from the nicest-looking balance sheet, but progress is being made. At the start of 2021, IBM had $61.5 billion in debt, so the old tech firm has reduced its liabilities to bondholders by some $6.3 billion so far this year -- and reduced debt by $17.9 billion since the purchase of Red Hat back in 2019. While there is still work to be done, IBM has an investment-grade credit rating because of its strong free cash flow generation, and it can handle both the dividend and the gradual repayment of debt.

The divestiture of Kyndryl promises to be a momentous event for IBM later in 2021, but for now, this is a top dividend stock for investors looking for some extra income. Share prices of the company are up 12% so far this year as of this writing.