Stock markets moved higher as the rotation toward cyclical and consumer plays continued.

During much of 2020, technology stocks led the way higher, allowing stock markets to post gains even under unprecedented economic pressures. In 2021, however, the stocks that got left behind in the market rally last year are vying for their turn in the sun. That's played a key role in the performance of major market benchmarks, as more sectors of the market have seen gains. As of 10:30 a.m. EDT Thursday, the Dow Jones Industrial Average (^DJI 0.00%) was up 139 points to 35,070. The S&P 500 (^GSPC -0.19%) had gained 20 points to 4,421, and the Nasdaq Composite (^IXIC) had picked up 56 points to 14,818.

Earnings season is at its peak, and a host of companies both young and old are talking about their latest results. Thursday was a good day for Ford Motor (F -1.35%) and Yum! Brands (YUM -1.80%), as the two well-known stalwarts aim to take what they've learned over the course of their long histories and take advantage of new opportunities to find pathways for further growth. Below, we'll look more closely at how Ford and Yum did and what it says about old-economy stocks in general.

Shares of Ford Motor were up 5% Thursday morning. Investors reacted positively to the news the automaker gave investors late Wednesday afternoon, which showed that the it is doing its utmost to participate in the massive shift toward electric vehicles while still making the most of its current lineup of popular vehicles.

Ford's numbers for the second quarter of 2021 were predictably stronger than last year's pandemic-hit period. Revenue jumped 38% to $26.8 billion. Ford managed to reverse a year-ago adjusted loss with earnings of $0.13 per share, which defied the modest loss that most investors were expecting from Ford. Wholesale unit sales rose 18% year over year to 764,000. 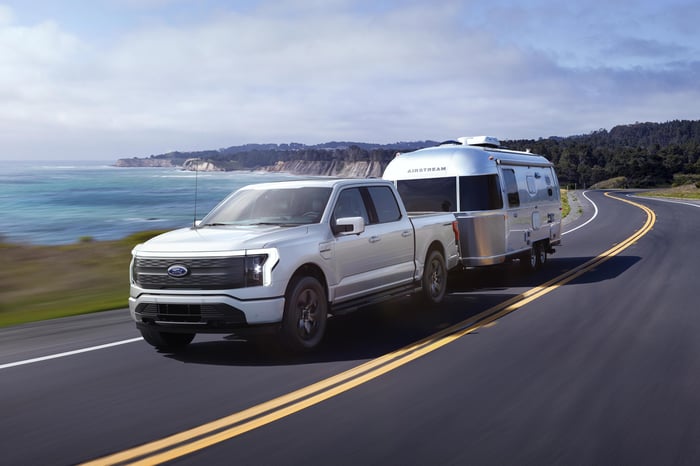 Ford has moved forward with its electrification efforts, and early results are promising. The Mustang Mach-E is No. 2 among all-electric SUVs in the U.S. even though the model is only 7 months old, and it has received critical acclaim from industry watchers. Meanwhile, the F-150 Lightning electric pickup has gotten 120,000 reservations, including a big draw from customers who haven't owned Ford products before. Ford is even moving forward on the autonomous-vehicle front, with a collaboration with Argo AI and Lyft (LYFT -0.86%) aiming to start deploying driverless vehicles in Miami later this year.

Many left Ford for dead in past years, figuring that it would get passed up by more innovative competitors. However, Ford has fought back, and its efforts are finally starting to get the attention of value investors who see a rare opportunity for future growth from the automaker as well.

Elsewhere, Yum! Brands also enjoyed a 5% rise in its stock price on Thursday morning. The restaurant chain has been on the upswing for a while, and second-quarter financial results gave the company an additional lift in investor sentiment.

Yum benefited from the economic reopening. Worldwide revenue was higher by 26%, with same-store sales gaining 23% from year-ago levels. Adjusted earnings of $1.16 per share were up 41% year over year. All of Yum's units, including Pizza Hut, KFC, and Taco Bell, managed to post positive same-store sales compared to pre-pandemic levels two years ago.

What's evident from the success of both Yum and Ford is that even mature companies with well-known brands can reinvent themselves and find new growth trends. That's what's pushing share prices higher on Thursday, and plenty of other companies can learn from the lessons that Yum and Ford have to teach them.

Why Ford's Pulling the Whole Stock Market Down Tuesday