Quest Diagnostics (NYSE:DGX), a diagnostic information services provider, announced that 2021's second quarter was the first period since 2019 that its organic base testing revenues rose. That growth, it said, was the result of "new hospital lab management contracts" and strong demand for diagnostic testing as patients returned to the healthcare system.

While Quest Diagnostics' second-quarter operating results were strong, it's worth asking: Can the company maintain its momentum? 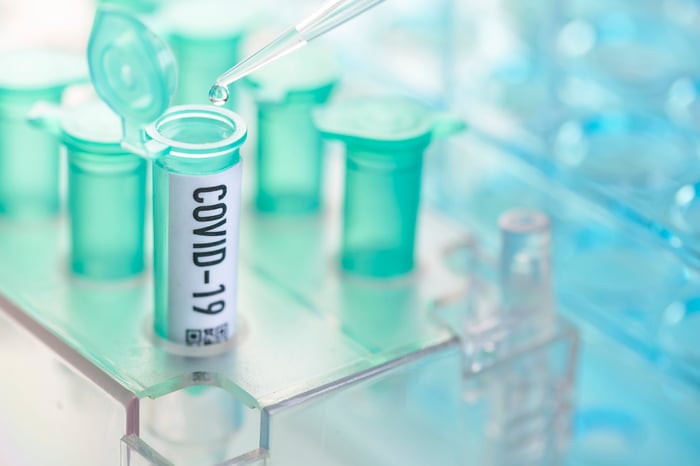 Moving down to the bottom line, Quests' adjusted operating income margin (adjusted operating income/net revenues) improved from 16.1% in Q2 2020 to 22.9% in Q2 2021, which was largely the result of COVID's impact on the business dissipating from Q2 2020 to Q2 2021 ($23 million in unfavorable impact in Q2 2020 compared to no impact in Q2). To protect the health and safety of its employees and customers, Quest Diagnostics spent $23 million up front in Q2 2020.

As a result of Quests' operating fundamentals to date this year, the company initiated full-year guidance between $9.54 and $9.79 billion in revenue, which equates to 1.1% to 3.7% year-over-year growth. This is still down from the company's net revenue surge from 2019 to 2020, which was 22.1%.

Quest Diagnostics' revenue and earnings forecasts signal that the company will be just fine from an operating fundamental standpoint, even with its outlook that clinical demand for COVID-19 testing will decline a bit through the second half of this year.

The company's Q2 report also shows an improved balance sheet in terms of its interest coverage ratio and the manageability of Quest's long-term debt load.

Fortunately, this is a manageable load for a company that generated $3.3 billion in trailing-twelve month (TTM) earnings before interest, taxes, depreciation, and amortization (EBITDA). Even conservatively factoring in a 20% decline in Quest Diagnostics' EBITDA over the next 4 quarters, the company's debt-to-EBITDA ratio would be around 1.6, which implies that it would take less than 2 years for its EBITDA to entirely cover the company's debt.

An aggressive share repurchase program at an appealing valuation

One final item of importance is that the company has taken advantage of its cheap valuation this year by repurchasing 12.5 million shares (9% of the company's 137 million diluted weighted average shares outstanding as of Dec. 31, 2020) for a total cost of $1.6 billion, which is equivalent to about $128 a share.

This helped lead the company to produce $3.18 in adjusted diluted earnings per share (EPS) (above analyst expectations of $2.86), which works out to a 123.9% year-over-year growth rate. What's more, the company still had $1.3 billion in remaining share repurchase authorizations at the end of Q2 2021, so investors should expect more share buybacks in the next couple of quarters.

Considering that Quest Diagnostics' enterprise value (EV)-to-EBITDA ratio is 6.1 and its median EV-to-EBITDA ratio over the past 13 years is 9.9, it appears as though shares of the company are at least moderately undervalued. Because public health officials expect that parts of America will remain mostly unvaccinated, organizations are spending billions on a future that will include COVID testing as a way of keeping the virus in check, especially in areas where vaccine hesitancy is more prevalent.

In other words, there will still be demand for testing in the foreseeable future, just not as much as there was prior to the release of the current line of vaccines late last year. This arguably makes Quest Diagnostics' fundamentals stronger and valuation more attractive than ever.

Quest Diagnostics is a name that long-term dividend-oriented investors should consider adding to their portfolio. While they're waiting for the market to revalue shares closer to the aforementioned fair value, they receive a safe (and market-beating) 1.7% dividend yield.

Quest Diagnostics' earnings beat, the likelihood of COVID testing continuing for at least the immediate future, and its current valuation make this company a post-earnings buy.