After the S&P 500's nearly 38% rise over the last 12 months, there aren't a lot of investing gurus out there calling the stock market cheap. There are different theories as to what has been driving share prices higher -- low interest rates, loose monetary policy, federal stimulus efforts, peak spending among the millennial generation, or some combination of those factors -- but most experts agree the market feels expensive. That said, there are still good deals on specific stocks to be had for investors ready to buy and hold companies focused on slow, steady growth.

Quest Diagnostics (NYSE:DGX) and Laboratory Corporation of America (NYSE:LH) are two examples. Between them, they dominate a vital and growing part of the healthcare system, with market shares of about 25% and 31%, respectively, in the otherwise fragmented medical diagnostics space. The pandemic threw a spotlight on that segment of the healthcare industry in 2020, and after a banner year, these two companies trade at valuations near their all-time lows. 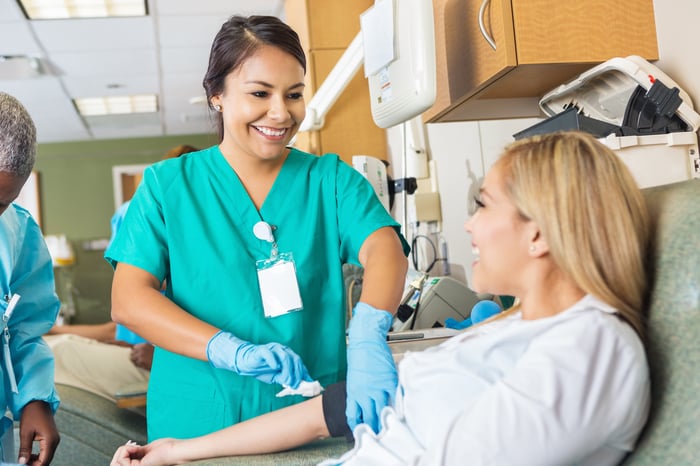 A quick peek in the rear-view mirror

To properly paint the picture of just what sort of bargains these stocks are today, let's start with a glance back at the past couple of decades. The COVID-19 pandemic brought a jump in diagnostics revenues and profits that is unlikely to be sustained. Still, both companies have strong competitive positions and reasonable prospects for the future, yet trade at rock-bottom price-to-earnings ratios. 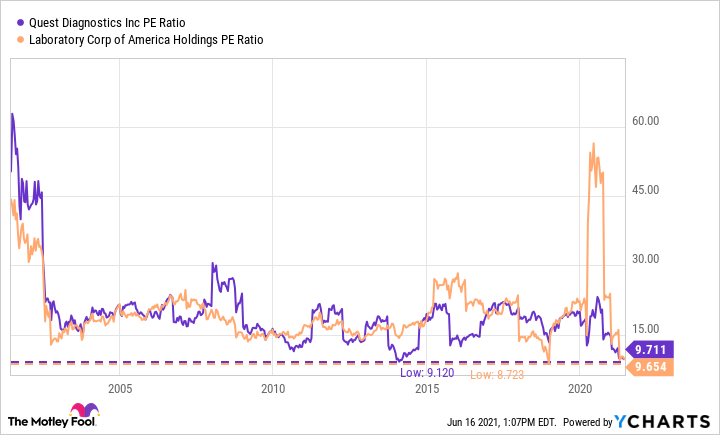 Quest operates a network with nearly 7,000 retail and patient access points. It conducts 1.8 million tests on an average day, and serves one-third of the U.S. adult population and about half of physicians and hospitals. Yet despite the critical role it plays in the healthcare system, its growth until recently had been anemic.

In the eight years leading up to the pandemic, its annual revenue growth averaged less than 0.5%. Of course, COVID-19 testing jolted the top line 22% higher in 2020. That boom continued in the first quarter of 2021: Quest Diagnostics reported its revenue rose 49% year over year. Management expects those coronavirus-related revenues to decline through the remainder of the year. The company believes it can get to revenue growth between 4% and 5% annually -- about half of that through acquisitions -- and adjusted earnings-per-share growth of between 7% and 9%.

Before the pandemic, Quest Diagnostics was consistently producing about $0.16 of operating cash flow (CFFO) for every $1 in revenue. Over the years, the stock traded between 10 and 14 times CFFO. Today, it trades at a ratio of less than 7. Even ignoring the last 18 months, its price is about 12.5 times 2019's cash flow.

In addition, at current share prices, the stock's dividend yield is a healthy 1.95%. Management just raised the quarterly payout by more than 10% to $0.62 per share. The company has also been buying back shares for a decade and recently added another $1 billion to its stock repurchase authorization. All told, the number of shares outstanding is down by 15% since 2012.

It may not be the most exciting stock to own. But Quest Diagnostics' combination of slow and steady growth, dividend increases, and share repurchases make it a safe investment in a market that is full of expensive choices. Add in its historically low price compared to earnings and cash flow, and it's easy to see that Quest is one of the better bargains among healthcare stocks today.

Laboratory Corporation of America -- more commonly known as Labcorp -- processes about 160 million patient encounters per year. It solidified the duopoly in the medical testing space in 2014, when it acquired Covance and its $2.6 billion in revenue. Added to its own $6 billion, that made it the largest diagnostics company in the industry. It operates nearly 2,000 patient service centers and has a network presence in more than 6,000 medical offices and facilities.

Labcorp has relied on acquisitions to fuel its growth to a much greater degree than Quest has. Management spent $267 million on strategic acquisitions last year, even during the pandemic. Between 2015 to 2019, it spent $9 billion on them, dwarfing the $1.6 billion Quest spent on acquisitions over the same period. Perhaps that's why growth has come a little easier for Labcorp. Its revenue had grown about 3% per year prior to the Covance acquisition and was coming in at about 6% per year leading up to 2020.

The two companies have had similar historical valuations. Labcorp traded in a range of 10 and 13 times CFFO in the years prior to 2020. That makes its current ratio of 8.2 look like a bargain. Applying its cash flow generation before the pandemic to the equation, the stock trades at a steeper 16 times CFFO.

Unlike Quest, Labcorp doesn't pay a dividend. Also, its count of shares outstanding has remained roughly stable. In many shareholders' minds, those relative negatives may be offset by Labcorp's higher growth rate. Management validated that view when it raised its revenue and earnings projections during its first-quarter earnings call. Although revenue growth is only expected to be between 2% and 6.5% this year, it now estimates that earnings per share will grow by nearly 40%.

What type of healthcare investor are you?

That a pair of companies that together control more than half of a critical part of the U.S. healthcare infrastructure are trading near all-time low valuations might seem absurd. Of course, a once-in-a-century pandemic can distort some metrics. Still, these stocks are trading at reasonable multiples even when compared to 2019. And there are solid indications that suggest COVID-19 testing is going to remain a significant business for the foreseeable future.

For investors considering opening a position in one of them, the deciding factor may come down to one's personal preferences about capital allocation. Are you an income-focused investor who prefers to collect dividends and benefit from share buybacks, or do you prefer companies that spend more of their profits on acquisitions for growth? Whichever they choose, investors on the hunt for cheap healthcare stocks with a history of consistency will be able to rest easy at night after buying either Quest or Labcorp.