Please ensure Javascript is enabled for purposes of website accessibility
Log In Help Join The Motley Fool
Free Article Join Over 1 Million Premium Members And Get More In-Depth Stock Guidance and Research
By Ryan Henderson – Aug 7, 2021 at 7:48AM

There are a few short-term issues overshadowing the big picture for this computer peripherals and hardware company.

Corsair Gaming (CRSR -0.30%), a top gear and equipment provider for the esports market, just reported second-quarter results. The slower revenue growth and concerns over supply chain issues it reported ended up causing the stock price to drop as much as 6% after Tuesday's release.

But despite the short-term hiccups the company is dealing with, management continues to show optimism regarding the company's long-term outlook. Here's why Corsair shareholders considering following the sell trend should be hesitant to discard their shares too quickly. 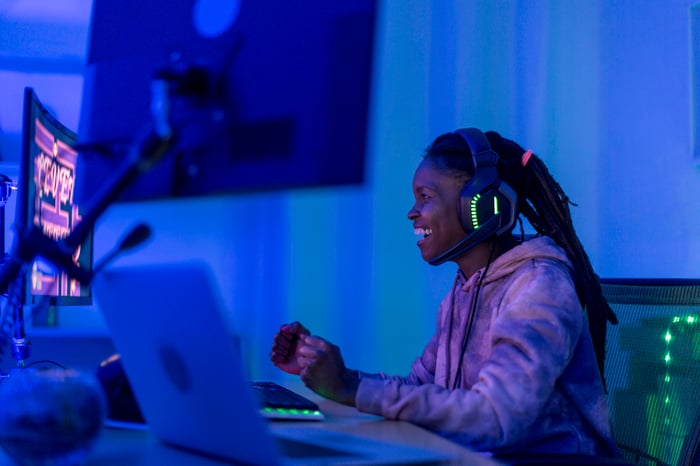 Q2 earnings had plenty of positives too

Although there was an immediate sell-off following the company's report, Corsair's financial results looked quite strong.

In the second quarter, the company generated $473 million in revenue, a 24% increase from the year prior. While that looks like a considerable slowdown from its more than 70% revenue growth in the first quarter, it's worth remembering that Corsair's yearly comparisons are beginning to lap the rapid acceleration in demand induced by the pandemic.

This time last year, initial shelter-in-place orders confined many people to their homes, and a record number of gamers started purchasing accessories and equipment. This trend not only resulted in a major boost in revenue, but it also left the company's inventory levels unbalanced. With minimal inventory to account for, Corsair generated a temporarily high cash flow figure for the period. Since that time, however, the company has worked to bolster its inventory balance, which has created poor annual cash flow comparisons.

In addition to reduced cash flow, Corsair was also bogged down by several supply chain issues during the quarter. Since Corsair procures many of its products from Asia, the recent surge in sales for the broad consumer electronics category has led to rising costs across the board. Logistics issues, port delays, and shortages for semiconductors and graphics cards all contributed to Corsair's financial results. In fact, CEO Andy Paul even said on the company's most recent conference call that "the cost of containers is probably three to four times now what it was two years ago."

But while these short-term factors no doubt had an impact on the quarterly performance, focusing too much on them could be a mistake, since growth was still relatively strong. Corsair's second-quarter gross profit increased 24% versus the same period a year ago and management even reaffirmed its full-year revenue and adjusted operating income guidance.

Don't be too quick to sell

But it isn't just the sheer growth that should have investors excited. Management seems to be leveraging its recent performance to enhance the company's overall position. During the second quarter, Corsair repaid an additional $25 million of its outstanding debt and has now reduced its net debt balance by 45% in the last year alone.

Corsair is also taking advantage of the recent success by using its excess cash to expand the product suite. In the first half of the year, Corsair launched over 75 new products and management said the company is planning to sustain, if not accelerate, that rate over the coming six months. These launches also included the introduction of the company's first-ever camera, which is designed particularly for video game livestreaming.

So while the temporary bumps in the road such as the logistics issues and tough year-over-year comparisons will certainly capture the majority of the headlines, Corsair still benefits from promising underlying trends. The company sells primarily to competitive gamers and that industry continues to grow thanks to the proliferation of self-broadcasting. Content sharing platforms like Alphabet's YouTube and Amazon's Twitch continue to help drive equipment and accessory sales and that seems to show no signs of slowing down. Even Paul referred to the trend as a "secular shift" and not a temporary acceleration.

As long as Corsair continues to maintain its No. 1 market share position in its gaming component categories and is able to sustain its revered brand among the creator community, it's probably fair to assume there will be greater profits in the years to come.

For a stock that trades at roughly 11 times its expected adjusted operating income for 2021 and looks poised for sustainable growth, selling too soon could be a costly mistake.

Buy This Undervalued Stock Before Everyone Else Does
360%