Please ensure Javascript is enabled for purposes of website accessibility
Log In Help Join The Motley Fool
Free Article Join Over 1 Million Premium Members And Get More In-Depth Stock Guidance and Research
By Cory Renauer – Aug 10, 2021 at 10:56AM

This morning Fulcrum Therapeutics shared data from the company's first clinical trial. The phase 1 study with healthy volunteers showed the company's lead candidate, FTX-6058, was well tolerated and likely to be an effective treatment for people born with sickle cell disease (SCD) and other hemoglobin-related disorders. 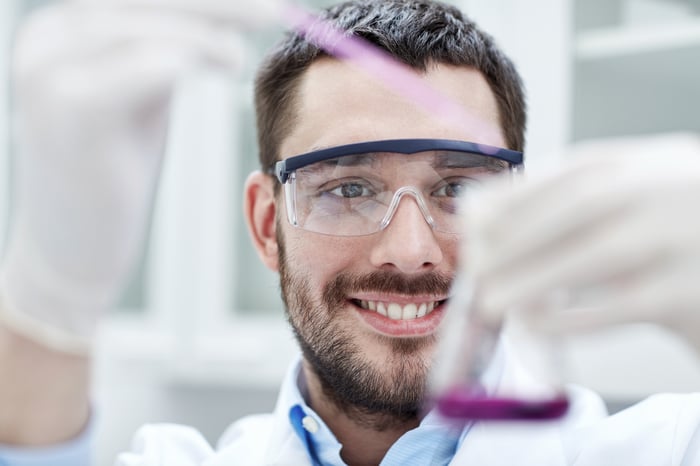 Normally, healthy adult patient data doesn't drive biotech stocks this powerfully. All eyes were on this readout because it could be the first of many for Fulcrum Medicines. The biotech employs machine learning techniques to find new drug targets, which is much easier said than done.

The root cause of SCD is unstable hemoglobin, and gene therapies that train bone marrow to produce HbF have been shown to work for the most severe forms of the disease. Most notably, a single administration of CTX001 from collaboration partners CRISPR Therapeutics and Vertex Pharmaceuticals has eliminated severe SCD patients' reliance on blood transfusions for years at a time following a single administration.

Unfortunately for Vertex and CRISPR, single administration treatments are a lot more difficult to sell than drugs like FTX-6058, which pharmacists could eventually dispense as a simple pill to be taken once daily. Since Fulcrum Therapeutics doesn't need to prove super long-term efficacy the way CTX001 does, its development timeline will be much shorter.

Fulcrum intends to begin treating sickle cell patients in the fourth quarter of 2021. If they can produce enough HbF to reduce their reliance on blood transfusions, this biotech stock will rocket higher still.

2 Soaring Biotech Stocks With More Fuel in the Tank