Compelling clinical-trial data that could validate the company's unique approach to new drug development inspired a slew of analyst upgrades.

Fulcrum Therapeutics (FULC -0.92%) shares are climbing again after the early clinical-stage biotech announced a plan to raise $100 million in a secondary share offering. Investors aren't thrilled about the share offering, but upgrades from Wall Street analysts helped them get over it and then some.

The stock was up more than 35% this morning, but the rally has stalled. Shares of Fulcrum Therapeutics were ahead just 3.9% at 3:13 p.m. EDT on Wednesday.

Yesterday, Fulcrum Therapeutics stock shot up after the company read out compelling results from the first clinical trial with its first new drug candidate, tentatively named FTX-6058. This is a once-daily pill that encourages the production of fetal hemoglobin (HbF) in order to help people born with sickle cell disease (SCD). 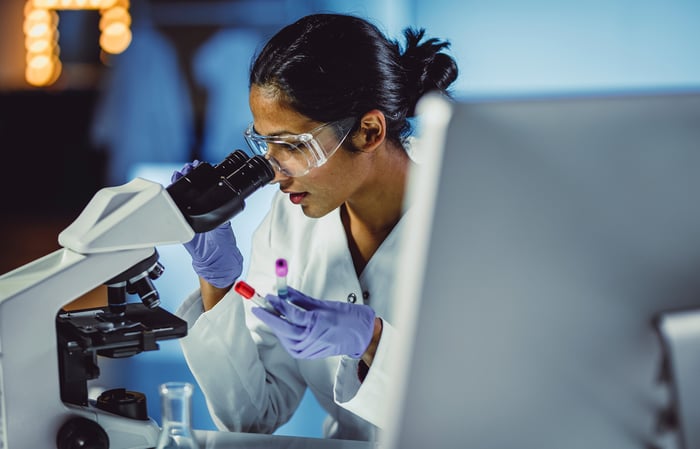 Fulcrum Therapeutics is trying to turn the world of drug development on its head by using artificial-intelligence algorithms to elucidate targets to aim new drugs at. We don't know if FTX-6058 will help SCD patients reduce their reliance on blood transfusions, but signs the company shared from a trial with healthy volunteers suggest it can provide a significant benefit.

Red blood cells of SCD patients lose their round shape because hemoglobin, the oxygen-carrying protein the cells contain, isn't as stable as it needs to be. There are complicated gene therapies in development now for SCD, but none are attacking the problem from the same angle as Fulcrum Therapeutics.

FTX-6058 is meant to treat SCD by helping patients begin producing HbF, which it appeared to do for healthy volunteers. People who received a 10-milligram pill once a day for 14 days had 4.2 times as many HbF-containing blood cells as they did before beginning treatment.

Sickle cell disease is rare, but there are more than enough patients underserved by available care to drive sales up past $1 billion annually within a couple of years after launching. We'll know a lot more about FTX-6058 around the middle of next year. In the fourth quarter, Fulcrum Therapeutics intends to begin a trial with SCD patients and a treatment period of up to three months.

2 Soaring Biotech Stocks With More Fuel in the Tank