Billion-dollar companies are like aircraft carriers -- turning them around often requires time and a calculated strategy. It becomes even harder when the market predicts failure and sends shares down over 90%, limiting the tools available to execute.

That's exactly what happened to GoPro (NASDAQ:GPRO), but it has since undergone a transformation to modernize its business model. Now, it's fast becoming a poster child for comeback stories. It's still the best action camera company in the world, but it also has more control over sales with a direct-to-consumer channel plus a subscriber base of over 1.1 million paying users.

In its second-quarter results released on Aug. 5, GoPro again posted a positive bottom line, suggesting it may have reached the light at the end of the tunnel. 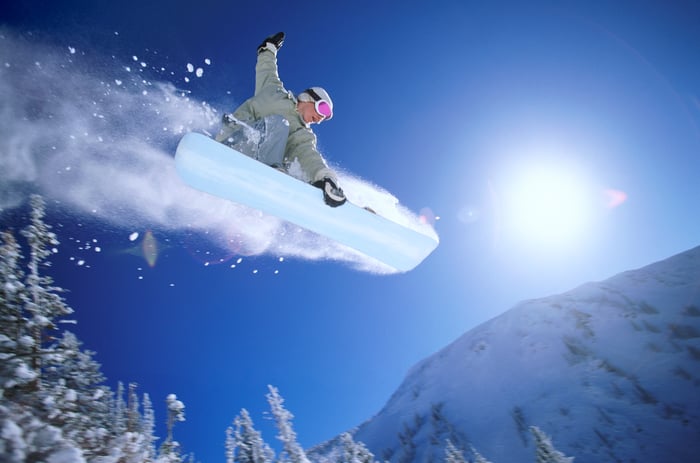 In March, GoPro launched a brand new camera app called Quik, in an attempt to compete with native smartphone cameras and capture consumers who aren't traditional buyers of its hardware products. It has already garnered 100,000 paying subscribers, which is a great achievement in just four months. But at just $9.99 per year, it's not a major contributor to revenue yet.

The real money is in the $49.99 per year GoPro.com subscription designed for loyal customers of the brand. It offers enticing benefits like up to 50% discounts on online purchases, unlimited cloud storage for GoPro footage, and no-questions-asked replacements twice a year for damaged cameras.

And GoPro subscribers get Quik for free.

The second quarter saw the highest amount of subscription revenue ever generated by the company at $11.6 million, representing 4.7% of total revenue. Management is guiding for GoPro to clear 1.7 million subscribers by the end of 2021, and in early 2022, the company expects to generate $90 million in recurring revenue.

This is key for GoPro's diversification away from hardware as subscriptions have extremely high gross margins of 70% to 80%.

Adopting a direct-to-consumer sales model has been a big part of the company's recent success. By removing retailers from the equation, GoPro is able to earn a much higher amount from each camera sold (including the retailer's cut).

The direct sales channel is facilitated through GoPro.com, and as it becomes a larger share of total revenue, there has been a significant increase in gross margin.

The company generated $249.5 million in total revenue in the second quarter, an 86% increase from the same quarter last year.

GoPro sold through 820,000 cameras during the period, and the average selling price for its lineup rose 15% to $345, even higher than the $330 the company expected. It appears consumers are springing for higher-end models like the HERO9, which starts at $349.98.

The company is now looking to grow its addressable market with a brand new Open GoPro initiative it launched during the second quarter. GoPro will allow third parties to integrate its cameras into their own products -- think sports broadcasting or integrated controls in smart devices and cars. The revenue potential is uncertain, but it highlights the aggressive strategy the company is taking to rise further from the ashes.

Based on the company's guidance and analysts' expectations, GoPro should generate over $1.1 billion of revenue in 2021. For context, it has a market capitalization of just $1.56 billion as of this writing, so its revenue multiple is still well-grounded as it regains investor confidence.

But more importantly, GoPro is estimated to deliver a full-year profit of $0.66 per share, and based on its accelerating performance at the moment, it might even do better. At the current price of $10.14 per share, the stock trades at just 15.4 times earnings -- a steep discount to the Nasdaq 100 at 36, despite exceptional operating performance.

It's clear consumers love GoPro's products, and repeat business is highlighted by its 1.16 million paying subscribers. It has finally found a way to leverage a market-leading hardware product into a recurring, high-margin income stream that should inch closer to 10% of total revenue in 2022.

If investors decide the stock is worthy of a price aligned with the broader market, it could double based on multiple expansion alone. But if recent results are a guide, it might get there just on merit.