Please ensure Javascript is enabled for purposes of website accessibility
Log In Help Join The Motley Fool
Free Article Join Over 1 Million Premium Members And Get More In-Depth Stock Guidance and Research
By Anthony Di Pizio - May 11, 2021 at 7:56AM

Few companies have suffered 90% share price declines and managed to return to glory. It's no easy feat and often involves a complete transformation of their existing business model. Action camera leader GoPro (GPRO -3.46%) is in the midst of a powerful turnaround, evolving from a one-dimensional product to developing a growing subscription model that is a hit with customers.

With a growing direct-to-consumer business, improving gross margin, and over one million paid subscribers in the first quarter of 2021, investors have plenty to be excited about. GoPro has set up a great value creation opportunity going forward. 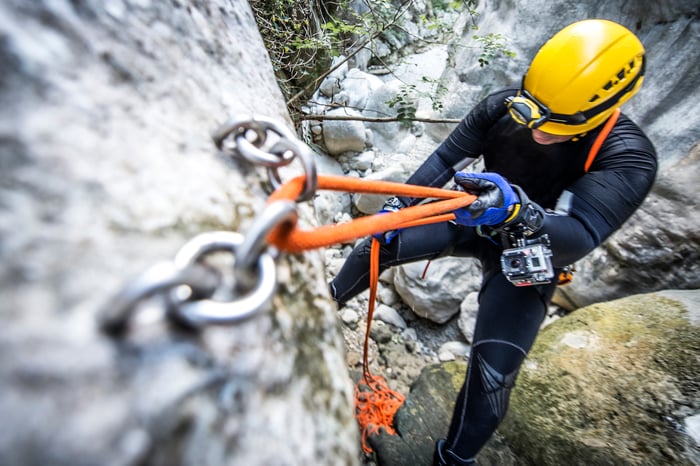 A pivotal aspect of the company's growth strategy is the direct-to-consumer sales channel, GoPro.com. Since 2018, it has ballooned from 8.8% of total sales to now over 40% as of the first quarter, and the numbers show an enormous benefit to overall gross margin as a result. The company determined it could improve profitability by accessing consumers directly, relying less on retail distribution channels and collecting a larger share of the profits.

The fourth quarter is typically the company's busiest because of the holiday season, followed by a sizable dip in the first quarter each year. This year, however, while sales through retail channels fell 49.6% sequentially in the first quarter, direct-to-consumer sales declined just 29.5%. This highlights the resilience of a growing online presence where the brand is far more accessible to customers.

GoPro.com generated $82 million of revenue during the first quarter, up a whopping 225% year over year. This gain comprised the majority of the company's 71% top-line growth for the quarter.

While unit sell-through was flat at 700,000 units, the average selling price was up 4% to $366, an all-time high for the company. It's important for sales to continue to grow, but the company is combatting slowdowns through revenue diversification.

The software shift ramps up

GoPro built a company on camera hardware and accessories, but it ran into slowing demand and a slumping share price as competition ramped up. The brand was losing its shine outside of its core customer base, but GoPro addressed these headwinds by adding new, recurring revenue streams through a few different subscription offerings:

Consumers appear satisfied as uptake has been really impressive. Subscribers were up 30% sequentially in the first quarter and an enormous 180% year over year.

In first quarter of 2018, paid subscriptions totaled 147,000, adding $2.0 million per quarter in revenue. Those figures now sit at over one million and $10.7 million, respectively. GoPro also highlighted how every one million subscribers will generate approximately $50 million in yearly recurring revenue with an operating margin of 50%. It now targets reaching two million subs by the end of 2021 with the margin expanding to 60% around 2022.

The U.S. comprised over 50% of the company's sales in the first quarter, which is in line with historical levels. GoPro's home market is leading the way among large, developed nations for vaccinations, and summer is approaching. The company should begin to see a ramp-up in business on account of this seasonality, and potentially since last summer was lost to the pandemic, consumers may be especially keen to resume their outdoor adventures and to document them with GoPro products.

While the company earned just $0.03 of adjusted earnings per share in the first quarter, it sits on almost $300 million of cash, which should be a sufficient reserve to see this business transformation through to greater profitability -- or at least until the end of 2022, given historical cash burn in losing quarters.

There aren't many $1.4 billion market cap companies you can buy that generate $1 billion of annual revenue while putting up quarterly growth of over 70%. GoPro has a popular product, more paid subscribers than ever, and an ambitious team intent on steering the company into its next phase of prosperity. Its stock also represents an opportunity worthy of investor consideration.