Three of them cut their dividends recently, one will cut its soon, and one is largely overlooked by the market. But all five have real growth potential and could prove to be great long-term buys.

Kronos Worldwide (KRO 1.42%) is one of the top five producers of titanium dioxide in the world and has been producing this pigment for over a century. Still, not many people know about the company, its products, and their applications. Titanium dioxide is used in coatings, paints, plastics, and paper, as well as innumerable everyday items such as cosmetics, toothpaste, and food items.

The use of titanium dioxide generally increases with rising standards of living. So its demand is expected to continue growing, especially in emerging economies. Its consumption is estimated to have grown at an average rate of 2% since 2000. Kronos estimates that it captures nearly 18% share of the North American titanium dioxide market and roughly 17% of the European market.

The stock is roughly 29% off its high price in 2021 and its yield has risen to an attractive level of around 5.6%. The titanium dioxide industry is cyclical, which means changes in economic conditions can impact the company's earnings. But overall, Kronos has performed quite well over the years. 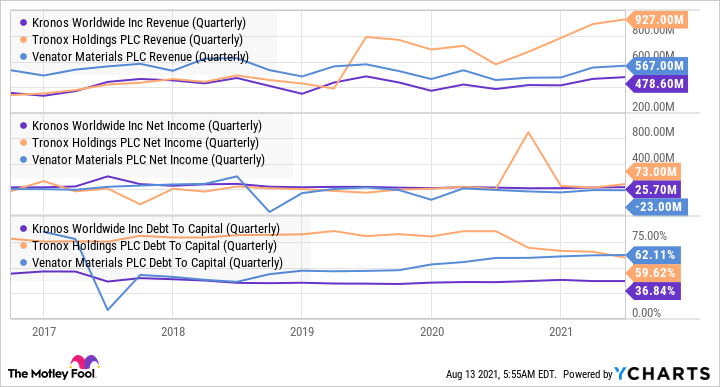 As the above chart shows, its balance sheet is much stronger than peers Tronox Holdings and Venator Materials. While Venator doesn't pay dividend, Tronox slashed its dividend in 2016 and currently trades at a yield of 1.8%. Krosos' overlooked stock can be a great long-term addition to your dividend portfolio.

Stock of technology and communications company Lumen Technologies (LUMN -1.43%), formerly CenturyLink, is trading at a yield of around 8.2%. Indeed, there are reasons for the high yield. The company's revenue has been falling for three years, due to several of its technologies becoming outdated and getting replaced by newer ones. At the same time, its debt level has risen significantly. Most dividend investors will also frown at the fact that Lumen has cut its dividend twice in the last 10 years. 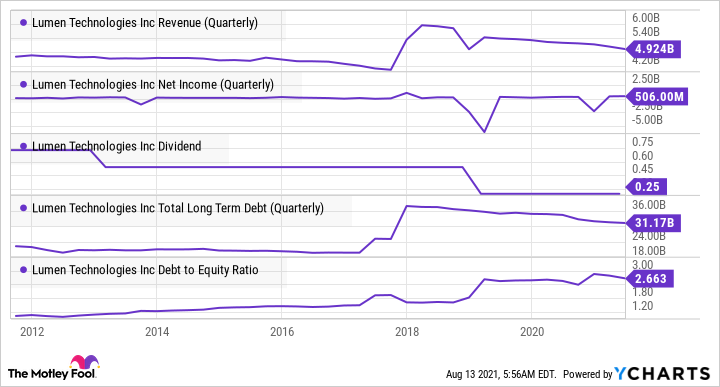 Yet Lumen is investing in newer technologies and expanding its fiber network. This should support its long-term revenue growth. The growth investments could, however, pressure the company's dividend and it may need to go for a cut again.

Lumen is also selling assets to pay down its debt. It has made some progress in debt reduction, and its total long-term debt has come down from more than $37 billion in 2018 to around $31.2 billion now. All in all, Lumen Technologies has the potential to turn around, and if it does, its stock price will surely rise. The company has long been a dividend payer and considers the dividend a key part of its capital allocation strategy. So, despite a possible dividend cut, this stock could generate attractive dividend income as well as appealing price returns in the long term.

AT&T (T -0.89%) investors are struggling to keep pace with the changes in the telecom giant's business lately. The company recently reversed its move into the media business by spinning off WarnerMedia and combining it with Discovery. Importantly, AT&T will cut its dividend once the deal closes, which is expected to happen in mid-2022. With that, AT&T, which increased its dividend for 36 years in a row, will lose its Dividend Aristocrat status. 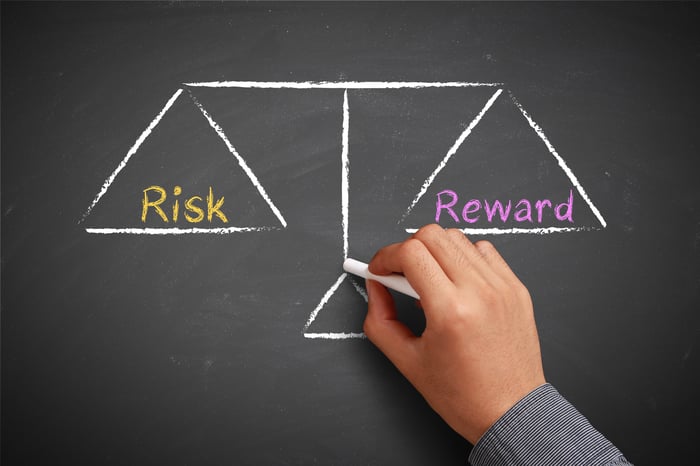 The spin-off will allow AT&T to focus on its telecom business -- something that it has largely done well for decades. Going forward, it can focus on expanding its 5G network and fiber footprint -- both crucial for its growth. Overall, once the transaction closes, the company should not only be in better financial shape, but also better focused on its core business. The stock is currently sporting a yield of 7.4%. Even if the dividend is cut in half, it would be a solid income stream at today's price.

Kraft Heinz's (KHC 0.86%) 2019 dividend cut has understandably taken it off of most dividend investors' radars. However, the company has surely seen some positive developments since then. Its revenue grew impressively in 2020, thanks largely to people staying at home due to the pandemic. But if the company manages to sustain the growth in the coming years, its stock may soon find interest again. 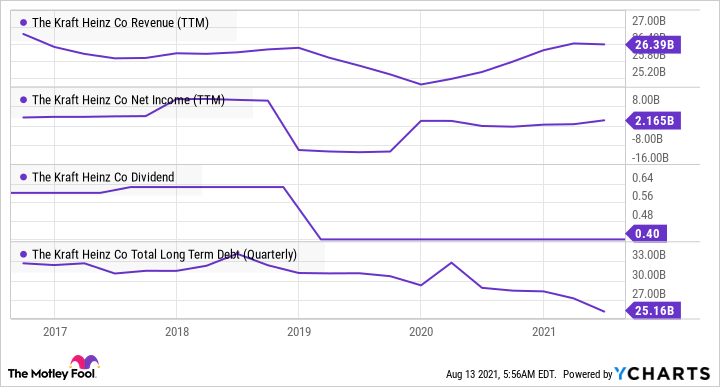 Another positive development for Kraft Heinz is the reduction in its debt -- from more than $34 billion in 2018 to around $25 billion now. Kraft Heinz seems to be moving in the right direction under the leadership of Miguel Patricio, who became the company's CEO in July 2019.

The company boasts a portfolio of several strong brands. In the long term, it has robust growth potential in international markets too. It remains to be seen if Kraft Heinz can sustain the growth it witnessed in the last year. But this food and beverage giant must absolutely be on dividend investors' watch lists.

Renewable energy utility Clearway Energy (CWEN -0.34%) owns wind, solar, and gas-fired generation assets. It derives roughly half of its revenue from the renewable power generation business. Clearway Energy had to cut its dividend in 2018 following PG&E's bankruptcy. PG&E accounted for roughly 23% of Clearway's revenue in 2018. However, after PG&E emerged from bankruptcy and kept its contractual commitments to suppliers, Clearway boosted its dividend again. 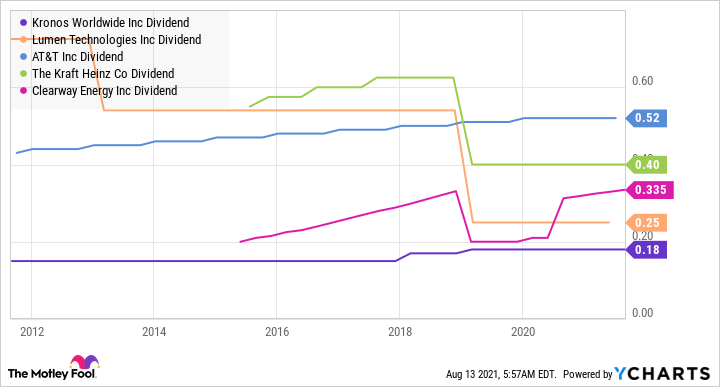 The dividend is now higher than it was prior to the cut, and Clearway Energy targets annual dividend growth of 5% to 8% in the long term. This stock offers a great way to participate in the renewable energy growth story while also generating a steady dividend income.

Here's How to Find the Best Dividend Stocks
376%