Please ensure Javascript is enabled for purposes of website accessibility
Log In Help Join The Motley Fool
Free Article Join Over 1 Million Premium Members And Get More In-Depth Stock Guidance and Research
By Chad Henage - Jun 26, 2021 at 7:15AM

Lumen, formerly CenturyLink, has cut its dividend twice in the last 10 years -- but this time, things are different.

Lumen Technologies (LUMN 0.72%) is either a bright idea for income investors -- or a value trap. The name has changed, but shareholders in the communications company have faced this scenario before. Under its old identity, CenturyLink, the company chose to cut its dividend twice in the last 10 years, in what the company said was an effort to bring down debt.  But with the company finally seeming to make good on its efforts to turn things around, investors can breathe easier now: This time, Lumen's dividend appears safe.

History is an expensive teacher

In 2013, CenturyLink cut its dividend, and investors severely punished the stock. At the time, management suggested it would use the saved cash to repay debt and buy back shares. CenturyLink shares traded in the $30 to $40 range in 2013; today those shares can be had for less than $15. CenturyLink's share buyback plan was clearly not the best use of the company's funds. 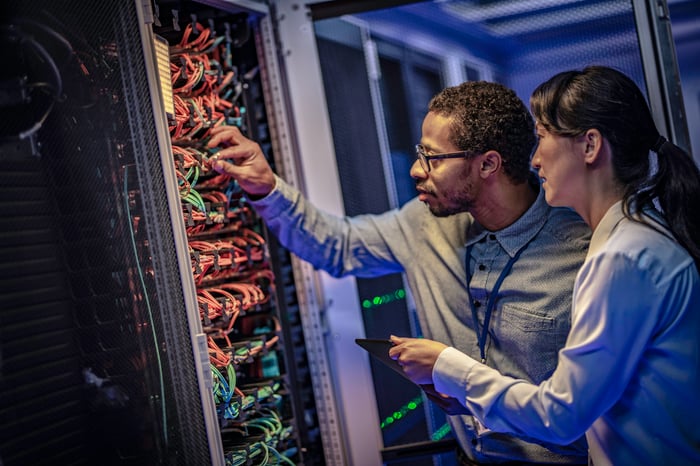 In the first quarter of 2019, Lumen CEO Jeffrey Storey said, "in general, we are seeing strong demand in our business groups." But during this same three-month period, CenturyLink reported a 5% annual decline in revenue, and not one of its units reported year-over-year revenue growth.  Investors frustrated by the reduced yield, and the seeming disconnect between management's comments and reality, sold the shares to some of their lowest levels in the last few years.

Lumen's been making significant progress cutting its debt over the last few years. With an 11% total reduction in long-term debt in a little over two years, Lumen has directly addressed an overhang on the stock. In addition, CEO Storey also mentioned on Lumen's earnings call that the company has refinanced more than $20 billion worth of its debt over the last year. Those efforts are literally paying off in lower annual expenses on the interest for all that debt.

But even as Lumen fortifies its balance sheet, the company must also improve its revenue trajectory before investors can justify buying into this high-yield stock.

Lumen's management seems to be owning up to the company's challenges. First, the CEO is now giving investors a more realistic view of the company's fortunes. Storey said in the current quarter, "I want you to hear directly from me that we are not satisfied and are focused on growth."

Lumen's future growth is expected to involve one main area: enterprise business sales. Lumen offers a fiber-based network that it believes is more flexible and faster than its peers. In 2013, CenturyLink had a limited fiber presence. Today, Lumen boasts 450,000 global fiber route miles.

As of the last quarter, Storey said that 85% of U.S. enterprises are within close range of Lumen's fiber-linked cloud facilities. Cloud computing is a popular term, yet connecting to the cloud means a physical connection in most cases. In the past, CenturyLink's problem was not being able to sell to companies because its network wasn't broad enough. By the end of 2021, CEO Storey says, Lumen's fiber coverage could increase to 95% of U.S. enterprises.

Lumen's overall revenue declined in the most recent quarter by 3.8% annually. However, three of the company's largest revenue segments, representing roughly 43% of revenue, were flat on an annual basis. Investors should also be encouraged that among each of Lumen's business divisions, there are segments showing growth:

With stability in nearly half of its business, and growth in other divisions, CenturyLink offers potential growth and income to investors.

Shareholders have heard this before, yet CEO Storey said on the last conference call that Lumen's dividend is a "key element of our capital allocation strategy." Lumen's prior dividend cuts have been painful, yet seemingly necessary to ensure the dividend's overall survival. Over the last two years, the company's peak payout ratio dropped from more than 100% to just over 36%.

Lumen benefits from relative steadiness in its revenue. Over the last three years, its sales have varied within only a few percentage points of $5 billion per quarter.

The company's focus on enterprise customers means going toe-to-toe with heavyweights in the technology and telecommunications industries. Investors should track Lumen's progress in international and global accounts and the large enterprise division. These two segments should exhibit growth if Lumen's transition toward fiber-based business is working.

In addition, investors should watch for Lumen to continue effectively manage its debt load and interest expense. A return to declining revenue across the board, or a move away from Lumen's debt reduction path, would be red flags moving forward.

Lumen has more addressable businesses to sell to from an expanded fiber footprint. In the last two years, the company has moved from virtually no growth to at least pockets of growth in each segment. With less debt, lower interest expenses, and improved prospects, Lumen is a turnaround story that seems to be gaining traction. Investors looking for income should put Lumen and its 7% effective dividend yield on their bright ideas list.