The company's strong 2020 growth might leave investors ghosted this year.

It has been a disappointing year for holders of Bumble (BMBL 0.52%) stock, with share prices down 29% since Jan. 1. The tech company continues to grow each quarter, but it may not be keeping pace with investor expectations.

The pandemic-ravaged 2020 was a bumper year for dating apps, with Bumble experiencing increased engagement during lockdowns and clearly accelerating revenue growth when things were at their worst.

But the company struggled to convert those tailwinds to the bottom line, making persistent losses; and with revenue growth now decelerating, the stock might still be expensive. 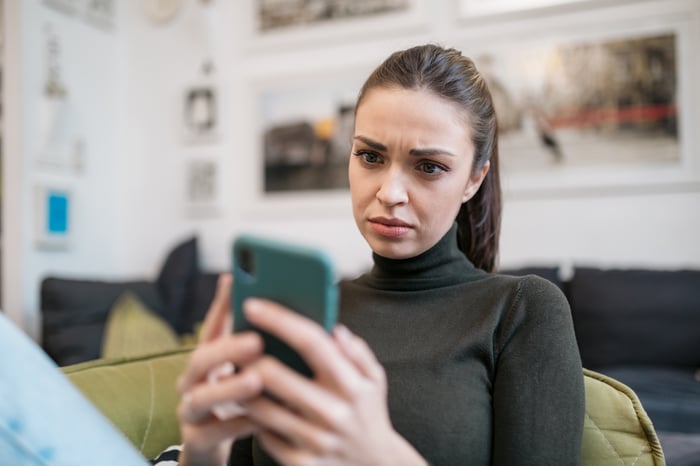 Its best quarters could be in the past

Bumble reported its second-quarter earnings results on Aug. 12 and, at face value, they were incredibly robust. Compared to Q2 2020, it grew revenue by 38% and added 20% more paying users.

But during that 2020 quarter, the pandemic-driven acceleration in performance was just getting started so it's not the most sturdy comparable. Sequential growth (quarter over quarter) tells a slightly different story. For a company buoyed so strongly by lockdowns, it's important to look at different angles.

Since the third-quarter 2020 peak in growth, revenue is up just 14% in the subsequent nine months, which provides a clearer picture of Bumble's present situation. That's not exactly a slow growth rate, but for a stock priced at over 12 times sales with little to no earnings, it's not surprising investors haven't rushed in to buy the dip this year.

The significantly positive earnings result in Q1 2021 came via an adjustment for tax provisions the company had received; with those stripped out, it actually made a net loss of $113 million.

For all of Bumble's improved performance during the pandemic, it was still unable to deliver net profits. If peak growth has indeed passed for the company, investor support for the stock might continue to waver and send it even lower.

Bumble owns two main assets: the Bumble dating app with its unique women-centric model, and the Badoo dating app which is more generic but covers geographic regions outside the U.S.

Badoo has a cheaper subscription option which is less than half the price of Bumble's premium offering, and it has always had more paying users than Bumble. However, in Q2 the Bumble app overtook Badoo in terms of paying user base, a consequence of Badoo's stagnant growth in recent quarters.

Year-over-year results were strong, But similar to revenue growth, sequentially the results are more muted. Total paying users and ARPPU (both apps combined) rose just 4.4% compared to Q1 2021. It indicates that 12 months from now, results may struggle to match the current pace.

The flagship app is doing most of the heavy lifting in every metric. It's growing the fastest and earning more money from each user on average, and that's a favorable combination. Since it mainly serves U.S. consumers and other premium markets, it commands a higher subscription price.

Badoo is most popular in Europe and Latin America, maintaining a lower price point to continue attracting users. But it has been a drag on the company overall because its average revenue per paying user was $14.52 in 2019 meaning it's down about 11.5% since.

Why you should think twice about buying Bumble

The point here isn't that Bumble has stopped growing -- that's clearly not true -- it's that the pace of growth has slowed to a degree that makes the current valuation somewhat unattractive.

Take competitor and industry leader Match Group (MTCH -1.02%) for example. It trades at a similar price-to-sales multiple as Bumble (12.9 times), but it's expected to generate almost four times more revenue than Bumble in 2021, and it's consistently profitable. It also owns the biggest and most successful dating app in the world, Tinder, which is worth a slight premium.

It's difficult to argue that investors should rush in to buy Bumble at a similar price-to-sales multiple as its closest competitor, when it hasn't proven it can generate consistent profits. Not to mention, if growth truly did peak in 2020, it's unlikely we'll see blockbuster financial performance that warrants share price growth in the immediate future.