Please ensure Javascript is enabled for purposes of website accessibility
Log In Help Join The Motley Fool
Free Article Join Over 1 Million Premium Members And Get More In-Depth Stock Guidance and Research
By Anthony Di Pizio - Jun 24, 2021 at 9:15AM

The dating giant appears to be facing some headwinds from economic reopenings.

Dating is often a multidimensional process. Although it originates online at an increasing rate, people eventually end up meeting in person or moving their online conversations off dating apps and into texts or social media platforms. The pandemic created a unique circumstance in which the online part of the equation was basically the whole thing -- lockdowns often prevented aspiring couples from progressing into the real world.

Bumble (BMBL 7.42%) reported that the number of messages in its platform rose 26% in March 2020 when the lockdowns began. It wasn't alone with most of the app-based dating players also enjoying a massive boost to their engagement levels. But when Bumble reported its first-quarter earnings results, revenue growth had slowed to a trickle on a sequential basis, so there is an indication the company may have seen peak growth in 2020. 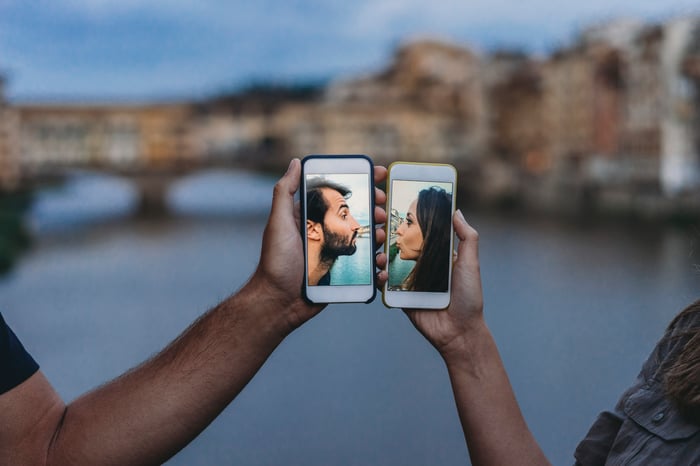 Bumble is actually a two-app story, covering different geographical areas at different price points. The flagship app is Bumble, with its women-act-first match concept, but it has fewer paid users than the company's other app, Badoo.

Badoo mainly serves Latin America and Europe and is considerably cheaper to use than Bumble. It has an average revenue per paid user of $12.76, compared to $27.75 at Bumble, which is more popular in the U.S., Canada, and Asia. Badoo has 1.45 million paid users, making up 51% of the 2.8 million company total.

Financially, Badoo has been a bit of a drag on the overall revenue picture as its average subscription price continues to drop. In the fourth quarter of 2019, average revenue per paid user was $14.52, so the current average of $12.76 represents a 12.1% decline.

Despite extremely strong year-over-year comparisons, recent quarterly results have shown stagnant sequential growth. For the last two quarters, it appears that economic reopenings have affected the company's ability to maintain the pace it experienced in the early part of the pandemic with quarter-on-quarter revenue growth seemingly topping out at 20% in the third quarter of last year.

Sequential revenue growth in the fourth quarter of 2020 was just 2%, followed by 3% in the latest report.

Paid user growth is a precursor to increasing revenue, and it has also slowed considerably. Despite having exploded by over 20% in 2020, growth slowed to less than 4% in the first quarter on a sequential basis.

Average revenue per paid user, the consolidated price paid by users across all of Bumble's dating apps, was also unchanged at $19.99 as the company reported the same figure in the fourth quarter of 2019.

The current slowdown aside, Bumble failed to convert strong pandemic-related growth into positive earnings, generating net losses throughout 2020. The massive positive earnings result in the first quarter was attributable to a tax benefit rather than to improved operating performance. If we strip that out, the company generated a net loss of $113 million.

As the global economy continues to reopen and people reconvene in more traditional ways, investors should keep an eye on whether revenue and paid user growth begin to decline. Luckily for Bumble, sequential growth so far has leveled off as opposed to contracting, but we're still somewhat early in the reopening phase.

Analysts expect the company to earn $1.68 per share for full-year 2021, but it's likely most of that is built into the recognition of the first-quarter tax benefit. By comparison, in 2022, they expect Bumble to earn just $0.33 -- which might be considered a positive anyway given its history of losses. Still, at a current share price of over $55, that would be an earnings multiple of more than 150.

In the latest earnings call, Bumble CEO Whitney Wolfe Herd stated the company believes friendship is the next area of growth. It's already integrated into the existing Bumble app, but it will be interesting to see how this opportunity contributes to operating performance.