For most investors most of the time, a simple index-based mutual fund like the Vanguard 500 Index Fund (NASDAQMUTFUND:VFINX) or an exchange-traded fund (ETF) like the SPDR S&P 500 ETF Trust (NYSEMKT:SPY) is a smart selection. The odds of owning a fund that outperforms the broad market are pretty poor, statistically speaking, so a simpler low-maintenance option just makes good sense.

If it just doesn't feel right to not take at least shot at beating the market, though, don't sweat it. There are still some solid mutual funds offering investors a chance to do so without imposing the sort of risk that a few too many other actively managed funds do. Here's a look at three of these top prospects to consider, particularly for individual retirement accounts.

Just as the name suggests, the Fidelity Select Software & IT Services Portfolio (NASDAQMUTFUND:FSCSX) owns a hand-picked selection of software and technology services stocks. Its biggest holdings include Microsoft, Alphabet, and PayPal Holdings, to name a few. 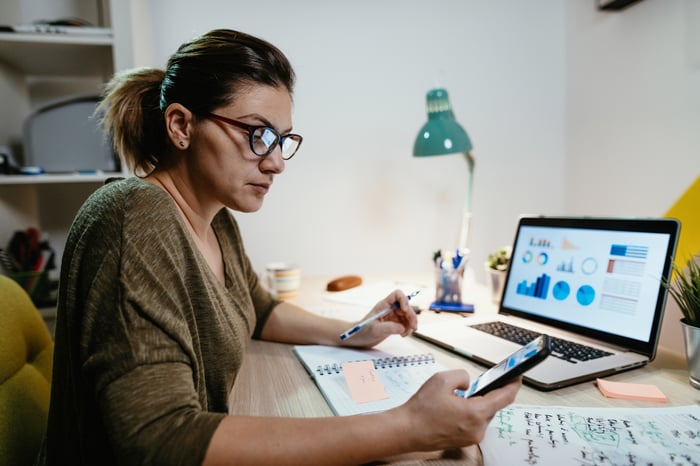 There's an obvious sector-based risk to it: Should technology stocks suddenly fall out of favor, that weakness is going to work against a slew of tech-based funds.

There's also an important nuance of the Fidelity Select Software & IT Services fund, however, that might negate such a headwind. While companies might postpone the purchase of equipment and consumers might choose to skip the purchase of a new gaming console or smartphone, neither businesses nor people are likely to stop using software or the cloud. This fund's key holdings are actually revenue-resilient organizations.

This lower-risk profile alone makes Fidelity Select Software a compelling prospect, but what's interesting is how the fund consistency pairs above-average returns with a rather muted level of risk. Numbers from Morningstar indicate this fund has averaged an annual gain of 24% over the course of the past 10 years, outperforming technology sector benchmarks as well as broad market benchmarks like the S&P 500 (SNPINDEX:^GSPC).

Obviously, past performance is no guarantee of future results, but given this fund's design, it's not unreasonable to expect its underlying stocks to keep leading the rest of the market.

The thinking behind ownership of an S&P 500-based index fund is simple, but it's also quite brilliant. Standard & Poor's repeatedly finds that about three-fourths of actively managed mutual funds underperform the broad market. The longer the time frame in question, the worse these active managers tend to do. Ergo, the better-odds play is not to "play" at all, but instead to buy and hold the S&P 500 for the long haul.

The S&P 500 isn't the only stock index, though. There's an entire subset of stocks just below those names that aren't as big as the large caps that make up the S&P 500, but are in a sweet spot for their growth. That's why the S&P 400 Mid Cap Index (SNPINDEX:^MID) has actually outperformed the S&P 500 large-cap index pretty reliably since 1990. 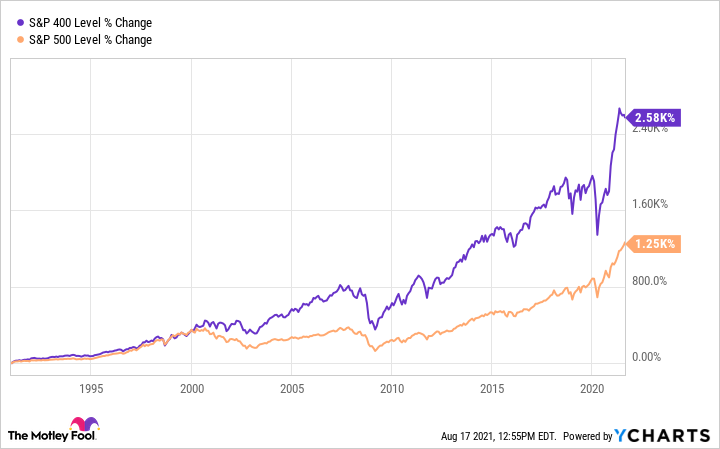 Enter the Parnassus Mid Cap Fund (NASDAQMUTFUND:PARMX). It's not an index fund, for the record, violating one of the chief philosophical reasons for not trying to beat benchmark comparison. Indeed, last year's portfolio turnover of more than 40% is pretty brisk even by the standards of actively managed funds. All of this buying and selling could have translated into a surprisingly shocking tax liability for positions held outside of a tax-deferred account like an IRA.

Still, the Parnassus Mid Cap Fund has index-like qualities. These characteristics paired with its given goal of minimizing the impact of marketwide pullbacks means its investors don't suffer all the seasickness linked to short-lived sell-offs.

There are still bouts of weakness, mind you, and the same holdings that curb the impact of pullbacks also crimp the potential upside of this fund compared to the S&P 400 Mid Cap Index. On balance, however, the trade-off is worth it in that you're still plugged into a group of equities with a track record of outperforming the most commonly used S&P 500.

It's another actively managed fund, bucking the premise that most investors are generally better served by passive investments in index-based instruments. The Oakmark Fund is also (usually) categorized as a value fund, leading to below-average results since the 1990s, when investors fell in love with growth stories and have never really fallen out of love.

With chatter that value stocks might finally be in vogue again, however, owners of the Oakmark Fund would be entering this new paradigm with one of the top value-oriented funds available. While value names have been trailing growth stocks for years now, this particular fund has outperformed value-based indexes in the past one-, three-, five-, and 10-year time frames, according to data from Morningstar. That's quite impressive in light of how little differentiation there is among value stocks.

Of course, Oakmark's loose definition of what constitutes a "value" stock is a big advantage. The fund's top holdings like Bank of America and Comcast are readily recognized as value picks, but they sit side by side with Alphabet and Facebook as the fund's biggest positions. Regardless, it works.