Please ensure Javascript is enabled for purposes of website accessibility
Log In Help Join The Motley Fool
Free Article Join Over 1 Million Premium Members And Get More In-Depth Stock Guidance and Research
By Alex Carchidi – Aug 21, 2021 at 7:19AM

Both of these companies are packed with opportunities.

Biopharma is a great place to look for growth stocks to pack into your portfolio because there's always an illness that can be treated more effectively in the future than it is being treated today. The trick is that investors in biotech or pharma businesses need to be patient -- after all, it typically takes around seven or eight years to make a drug and get it approved by regulators.

So, you might need to hold a biopharma stock longer than you would something from another sector. But once companies get a few different medicines selling on the market, the cash really starts to roll in, and that's when shareholders start to get lucrative opportunities to cash out. Let's examine a pair of steadily growing biopharma stocks and analyze why they're likely to keep expanding for years and years. 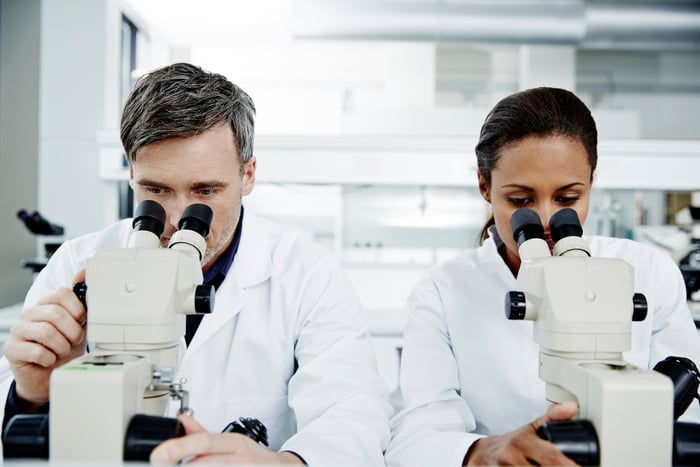 Vertex Pharmaceuticals (VRTX -1.01%) is worth holding because it's the undisputed leader of its target market -- cystic fibrosis therapies. Its portfolio of approved CF drugs will deliver the company at least an estimated $7.2 billion this year, made possible by an intense level of market penetration and decades-long devotion to research and development in the space.

CF is a rare genetic disease; 83,000 people are affected by it in the entire Western world. Right now, Vertex's therapies are used by about 50% of CF patients, which is a major accomplishment to say the least.

So far, the company has had little trouble convincing regulators that its drugs are safe and effective for wider and wider populations of patients. It's also managed to remain strongly profitable and continued to expand revenue within the CF market. If management's plans for expanded approvals for younger age cohorts continue to come to fruition over the next few years, Vertex will eventually be treating as many as 90% of all people with CF. That means investors can look forward to a steadily increasing drumbeat of new revenue and expanded approvals, both of which will buoy the stock's price significantly.

Furthermore, the company is moving its pipeline beyond CF with a handful of mid-stage clinical programs for kidney diseases, genetic hematologic disorders like sickle cell disease, and pain relief. In other words, even if it eventually completely corners the entire market for CF therapies, there will still be other opportunities for growth. And over the next decade, that's bound to enrich investors.

You've probably already heard of Novavax (NVAX -2.88%) on account of its coronavirus vaccine candidate, which is on the cusp of being approved for sale in a handful of countries. In the second quarter of this year, the company marked $1.1 billion in up-front payments from advance purchase agreements for its vaccine alone. As the pandemic wears on, it's safe to say that there will continue to be sky-high demand for its first product that's anticipated to hit the market.

But there's a lot more in Novavax's future as a growth stock than its coronavirus jab alone.

Its seasonal influenza vaccine for older adults, NanoFlu, is also poised for regulatory approval after successfully completing its phase 3 clinical trials. Recurring revenue from yearly sales of NanoFlu would contribute a lot to the top line, and there aren't many barriers remaining in the way. And, thanks to ongoing studies, Novavax recently showed that its flu jab can be co-administered with its coronavirus jab. That will open the door to massive new revenue from developing a combination inoculation for both diseases over the next few years.

Before that, the company will likely increase sales of its coronavirus vaccine by getting it or a derivative project approved to use as a booster shot to protect against viral variants. Of course, Novavax also has other late-stage projects in its pipeline that could be hits for investors, like its respiratory syncytial virus vaccine.

While it's true that the company has had a handful of problems with its manufacturing operations in recent months, over the next decade it's hard to see how its issues could persist in the face of focused effort.