Please ensure Javascript is enabled for purposes of website accessibility
Log In Help Join The Motley Fool
Free Article Join Over 1 Million Premium Members And Get More In-Depth Stock Guidance and Research
By Ryan Henderson – Aug 21, 2021 at 6:30AM

These two promising companies are headquartered abroad but do business everywhere.

Since the U.S. is home to the largest equity market, as measured by market cap globally, it naturally attracts plenty of investor coverage. While investing in international stocks can often seem intimidating to U.S.-based investors, ignoring global opportunities can be a big mistake.

Though this level of coverage can help investors stay informed, it also leaves room for the incorrect pricing of great businesses beyond America's borders. Here's why Spotify Technology (SPOT -2.12%) and Wix.com (WIX 0.56%) are two international companies to keep an eye on. 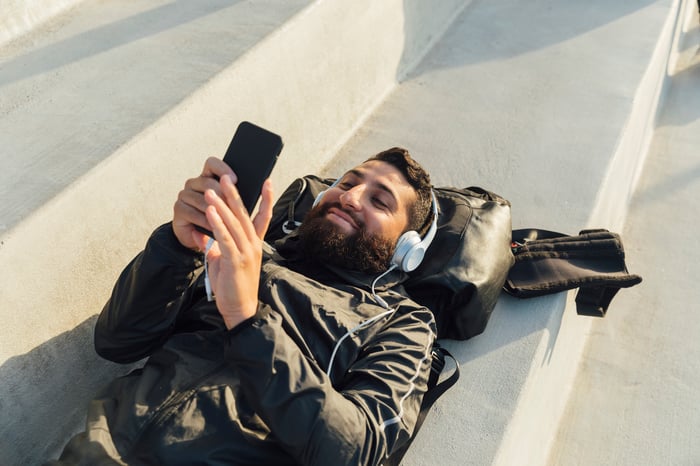 Spotify and its audio opportunity

Best known for moving the music industry away from the pay-per-song model and returning it to growth, Spotify is now the largest audio streaming platform globally. As a pioneer of the "freemium" model, Spotify, which is headquartered in Stockholm, Sweden, offers users a massive catalog of music for either a monthly subscription or an ad-based experience.

Though this approach was well received by consumers in most of its markets, it was a hard sell to the content owners. Since the majority of the content belongs to artists and major music labels, Spotify is required to pay out a certain percentage of its revenue to the respective rights holders. This has left it with a relatively small piece of the pie and has resulted in abnormally low gross margins for a digital business of roughly 25%.

But Spotify looks set on expanding its gross margin, and there are a few ways it can do that.

First off, it now dominates the music streaming landscape. The platform is home to 365 million total monthly active users spanning more than 100 countries. No other pure audio streaming platform comes close to matching that figure. This level of scale and distribution has resulted in some benefits for the company, one of which is the promoted playlist placement. Since most music artists are focused on attracting the largest possible audience, many are willing to reduce their required per-stream take rate in exchange for placement in Spotify's heavily followed playlists such as RapCaviar or Today's Top Hits. This, in turn, raises Spotify's profit margins per stream.

But aside from music, Spotify has also been making a major push into alternative forms of audio such as podcasts, audiobooks, and live conversations. Between its acquisitions of podcast distribution platforms like Megaphone and Anchor; its originals and exclusives such as The Joe Rogan Experience, Call Her Daddy, or The Ringer; and its recent acquisition of live audio platform LockerRoom, Spotify has spent more than $1 billion on audio-related investments.

While it's difficult to pin down the size of the opportunity or addressable market for podcasts and audio broadly, the company's investments are clearly beginning to bear fruit. In its latest quarterly conference call, CEO Daniel Ek stated that podcast revenue was up over 627% year over year. Listenership trends seem to be moving in a promising direction as well. Over the last year and a half, podcast listeners have increased by more than 100% on Spotify.

With the potential to expand profit margins and grow revenue from new forms of audio, the company's current multiple of trailing-12-month market cap to revenue -- less than 4 times -- presents plenty of upside for shareholders.

Another promising international company that investors might want to watch is Israel-based Wix.com.

Wix's drag-and-drop digital canvas allows users to establish the internet presence they desire in exchange for a subscription price. Today, it has 210 million registered users and more than 5.5 million premium accounts across its platform. These accounts include businesses like hotels, restaurants, yoga studios, and plenty more.

The company's core offering is still its no-code website building solution, but Wix is trying to become a more-comprehensive digital operating system. Companies can access a number of additional features such as shipping, payments, scheduling, analytics, and basically anything they might need to get their business done online. Wix categorizes these additional functions as "business solutions revenue" in its financials.

But the company is taking additional steps to grow as well. During the second quarter, Wix announced a partnership with the design and marketing company Vistaprint, which is home to 17 million customers that will now be introduced to Wix's platform as they seek to build their business online. Wix estimates that this partnership could deliver hundreds of thousands of new subscriptions over the following five years.

However, despite its roughly 30% annualized revenue growth rate since 2015, the company still trades at a fairly reasonable valuation. In its latest quarterly report, management estimated that Wix will collect at least $15 billion from its existing customers over the next 10 years, a sizable figure for a company with a market cap below $12 billion.

With Wix's strong customer lock-in, its robust suite of additional features, and the overall push toward low-code and no-code website building, the future looks awfully bright for this growing international tech business.