Why the leader in audio streaming just acquired this small sports-talk app.

This week, audio streaming giant Spotify Technology (SPOT 1.42%) announced that it has acquired Betty Labs, the parent company of live-audio app Locker Room. The deal is rumored to be valued at about $50 million, according to The Wall Street Journal.

This announcement shouldn't come as any surprise, since less than a month ago Spotify announced at its Stream On event that the company would be making more investments in the audio space, even at one point promising greater interactivity for creators and users. Spotify plans to leverage Locker Room's technology for other media as well, giving creators of all types a platform to better engage with their audiences. 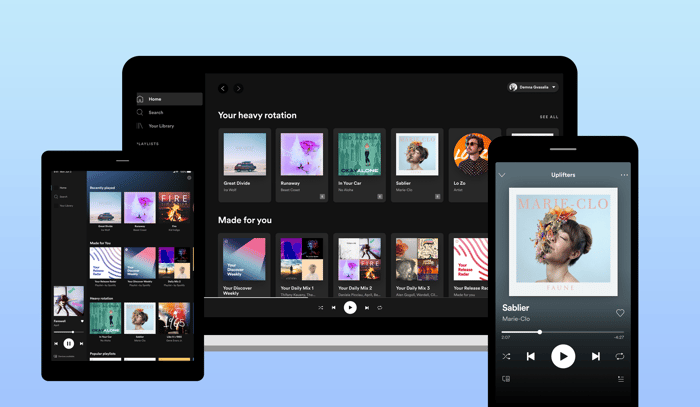 What is Locker Room?

Locker Room is a live audio app designed primarily for conversations about sports. The app allows fans to react to games and sports news instantly through a live discussion. Though it's currently being used for sports-specific topics, Spotify appears to be after the roundtable audio format that sits at the center of Locker Room's offering.

In recent months, the private audio platform Clubhouse has seen a meteoric rise in popularity, amassing more than 3 million users and a $1 billion private valuation. In response to this growth, several other popular social media companies are making a push toward similar offerings. Twitter is in the process of rolling out its own audio platform called Spaces, and Facebook is reportedly getting in the mix as well.

This live audio format allows followers, fans, or friends to openly discuss topics in real time with a host designated to moderate the conversation. Since direct conversation is a more intimate style of engagement, artists, creators, or influencers will be able to build a deeper connection with their respective audiences.

The push toward audio

Spotify is home to 345 million monthly active users who come to the platform to engage with a variety of creators. Though Spotify is still widely recognized for its music catalog, the company is trying to expand into all forms of audio. Pushing to achieve this, Spotify has spent nearly $1 billion on podcast-related investments in recent years.

The investments seem to be bearing fruit, since more than 86 million users listened to a podcast in the fourth quarter, up 99% from the same period in 2019. In addition to engagement, podcast creation appears to be booming as well. On the company's latest conference call, Spotify CEO Daniel Ek stated that there are roughly 2.2 million podcasts now on its platform, more than triple the amount from a year ago.

Locker Room's live audio technology is just the next step in this push. Creators of all types can use this platform in a number of different ways. Whether it's live shows for podcasters, open discussions between musicians and their fans, or even debates on random topics, Spotify can now act as the intermediary.

Granted, there aren't too many statistics to back up this claim, but it's probably logical to assume that much of the time spent on Spotify's platform is done by passive users. Listeners plug in their earbuds or connect on commutes and hit "play" without staring at their phones the whole time. Engaging in conversation requires a little more activity than that.

But this latest move shows Spotify apparently hedging its bets and capturing users in whatever form they might want to participate -- and for good reason. In the company's press release highlighting the acquisition, its chief research and development officer Gustav Soderstrom stated that both fans and creators have been asking for this. While it's difficult to determine to what extent this feature will be used, at the least, it's another tool in creators' toolboxes.

To become a one-stop shop for all things audio, live discussions will be a crucial component. As a Spotify shareholder, this strikes me as a logical acquisition, and it should help drive more users to the platform over time.