What's common between Corsair Gaming (CRSR -3.26%), Skyworks Solutions (SWKS -0.23%), and Advanced Micro Devices (AMD -1.81%) apart from the fact that all three tech companies are growing at a terrific pace? They are trading at attractive valuations, making them ideal bets for investors looking to invest in growth companies without paying through the nose.

Let's look at the reasons why investors on the hunt for growth stocks trading at reasonable valuations should consider buying them right away. 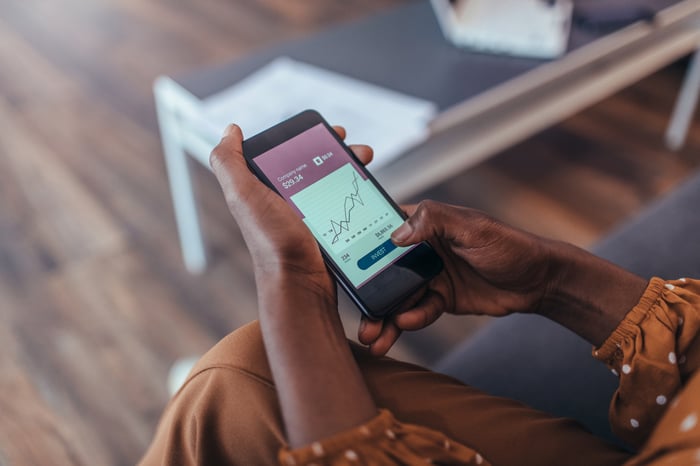 Corsair Gaming is dirt cheap despite sitting on a massive opportunity

Corsair Gaming has had a forgettable 2021 so far as shares of the video gaming hardware and peripherals maker have pulled back substantially despite a string of impressive quarterly results. 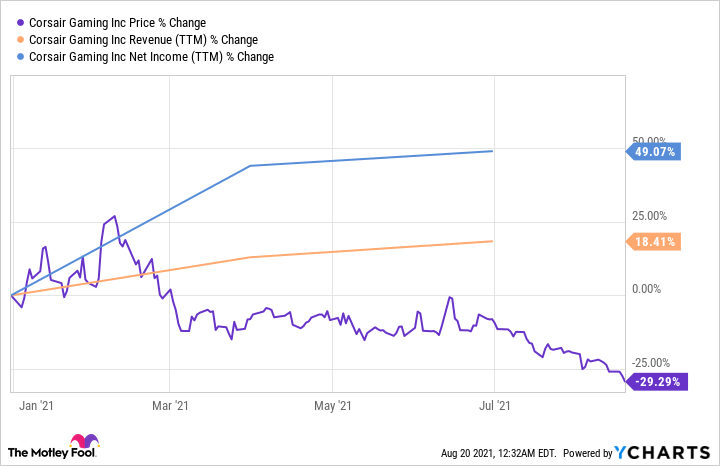 The company's second-quarter results couldn't stop the stock slide either as adjusted earnings of $0.36 per share missed the Wall Street estimate of $0.39 and was a penny lower than the year-ago period's figure. Corsair's adjusted earnings before interest, taxes, depreciation, and amortization, or EBITDA, margin also fell 210 basis points year over year.

The market seems to be ignoring the fact that Corsair put in a record performance last quarter despite facing several challenges. Its revenue increased 24.3% year over year to $472.9 million and exceeded expectations. Corsair's performance could have been much better had it not run into component shortages, port delays, and pandemic-related shutdowns. Additionally, the company saw "significant increases in logistic costs, particularly ocean freight," which impacted margins across the board and hurt the bottom line.

Corsair has maintained its full-year guidance despite the challenges it faced last quarter. More importantly, the company remains upbeat about its long-term prospects thanks to the growth in the number of people playing video games.

Corsair management points out that the PC gaming peripheral market was growing at an annual rate of 24% in the U.S. before the pandemic. Since last year, the market is clocking 80% annual growth thanks to the addition of new gamers as well as equipment upgrades by existing ones. Corsair estimates it is now sitting on an upgrade cycle that could help it sustain its impressive growth.

Citing NPD data, Corsair said on the Q2 earnings call that sales of keyboards and mice are growing at a faster pace than headsets. This points toward an upgrade cycle as headsets are the most widely sold peripherals. The faster growth of mice and keyboards suggests that gamers are buying better equipment to improve their gameplay.

Third-party research suggests that this upgrade cycle is going to add billions of dollars in addressable opportunity for Corsair. Technavio estimates that the global PC peripheral market could add $43.4 billion in revenue through 2024. Meanwhile, sales of high-end PC gaming hardware are expected to double by 2024 as compared to last year, according to Jon Peddie Research.

As such, Corsair Gaming seems built for long-term growth and investors should look past the near-term headwinds, especially considering that it is trading at just 1.25 times sales and 16.3 times trailing earnings. These multiples, along with its bright prospects, make Corsair a screaming buy right now as it is way cheaper than the S&P 500's price-to-sales ratio of 3.2 and earnings multiple of 31.

With a trailing price-to-earnings ratio of 21.4 and a forward earnings multiple of less than 16, buying Skyworks Solutions stock right now is a no-brainer given the pace at which it has been growing. The company's revenue in the recently reported fiscal third quarter increased 52% year over year to $1.11 billion, while adjusted earnings increased 72% to $2.15 per share.

Skyworks' guidance was also impressive. The company expects revenue to jump 36% year over year in the fourth quarter at the midpoint of its guidance range, while adjusted earnings are expected to increase 37%. But Skyworks can trounce expectations, like it has done over the past few quarters, as both its businesses are firing on all cylinders.

The mobile business recorded year-over-year growth of 52%, while the non-mobile broad markets segment registered 50% growth last quarter. The good news for Skyworks investors is that both segments are sitting on secular catalysts.

The mobile business is benefiting from the global rollout of 5G smartphones. Skyworks is in a prime position to take advantage of the boom in 5G smartphone sales thanks to its broad customer base. The chipmaker supplies its components to Apple (AAPL -0.80%), its largest customer with 56% of sales last fiscal year, and a clutch of top Android smartphone original equipment manufacturers such as Oppo, Vivo, and Xiaomi, among others.

Apple is going to be one of Skyworks' biggest growth drivers given its influence on the chipmaker's top line and the solid demand for the 5G-enabled iPhones. The iPhone 12 has been a runaway hit for Apple with sales of the series crossing 100 million units within just seven months of launch according to Counterpoint Research.

The momentum looks all set to continue with this year's iPhone launch. A recently conducted third-party survey of 3,000 iPhone owners over 18 years old revealed that 44% of them are willing to buy the 2021 iPhone models. Not surprisingly, Apple has reportedly increased the initial production batch of the 2021 iPhones to 90 million units from 75 million units last year. So, Skyworks' largest mobile customer seems set for better times ahead, and the same can be said about the broad markets segment.

Skyworks said on its latest earnings conference call that the broad markets segment is "benefiting from strong demand for [Internet of Things] solutions, including WiFi 6 and 6E and smart audio, as well as emerging use cases in industrial and automotive markets."

Investors should note that these markets have a lot of room for growth. The market for WiFi 6 chips is set to grow at an annual pace of nearly 22% for the next five years, while the connected car market is on track to record 17% annual growth through 2027, according to third-party estimates.

Skyworks Solutions can keep firing on all cylinders, and investors would do well to buy the stock given its enticing valuation.

AMD now anticipates 60% revenue growth in 2021, up from its original forecast of 37% growth issued in January this year. The company has also increased its adjusted gross margin estimate for 2021 to 48% from the earlier forecast of 47%. The interesting thing to note here is that AMD stock trades at a discount to its historical multiples. The company's trailing earnings multiple of 37 is lower than last year's average of 124, while the price-to-sales ratio of 9.4 represents a discount to AMD's 2020 multiple of 12.7.

Given that AMD had delivered 45% revenue growth in 2020 and is on track to do better this year, buying the stock looks like a no-brainer. What's more, buying AMD stock will help investors take advantage of its impressive market share gains against Intel and the fast-growing gaming console market.

Mercury Research reports that AMD's share of the x86 server market has hit a 14-year high of 22.5% in the second quarter of 2021. The company controlled just 12.3% of this market at the end of 2018. AMD's rapid market share gains against Intel are here to stay as it enjoys a technological advantage. That could translate into more revenue for AMD as Intel's client computing group generated $40 billion in revenue last year, while the former's total revenue was $9.8 billion in 2020.

Meanwhile, AMD is winning big from the latest generation of gaming consoles. This is evident from the growth in the company's enterprise, embedded, and semi-custom segment that grew 183% year over year last quarter. AMD expects "console demand to remain strong throughout the year," and the addition of a new console customer in the form of Valve's Steam Deck could give the segment a shot in the arm.

Such tailwinds make it clear why AMD's earnings are expected to clock a 30%-plus annual growth rate over the long run, which is why investors should consider taking advantage of the relatively cheap valuation and buy this growth stock.