Not every stock that you invest in will go on to be a big winner, but owning just a handful of stocks that deliver decades-long winning streaks can produce life-changing returns -- if you hold on patiently. Consider that Microsoft delivered a total return of roughly 26,600% over the last 30 years. Apple's performance across that stretch was even better -- a staggering return of roughly 78,400%.

With that in mind, we asked three Motley Fool contributors to weigh with profiles of companies that they believe have what it takes to deliver fantastic performance over the long term. They identified Activision Blizzard (NASDAQ:ATVI), Nike (NYSE:NKE), and Airbnb (NASDAQ:ABNB) as set-it-and-forget-it stocks that could crush the market. 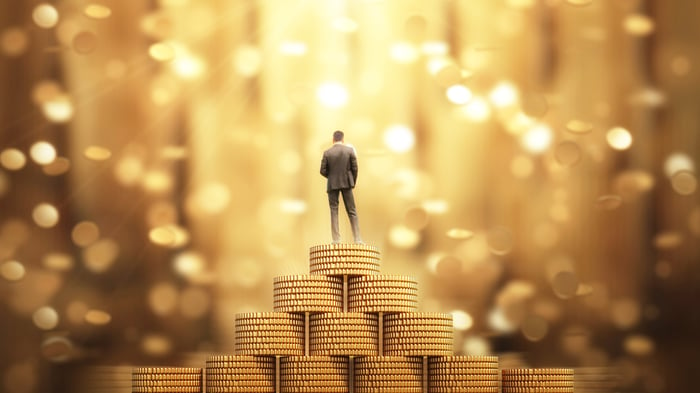 Bet on the growth of interactive entertainment

Keith Noonan (Activision Blizzard): The video game industry has already grown by incredible leaps and bounds, but interactive entertainment is still relatively young as a medium and has tons of untapped potential. Activision Blizzard is an industry leader that looks primed to continue serving up hits, and the company's stock should be a winner for long-term investors.

Right now, its big success story is the Call of Duty franchise. The series has played a big role in powering Activision Blizzard's performance for roughly two decades, but the popular action game property has never been more successful or more central to the performance of the overall publishing unit than it is today. In addition to big successes with retail releases for the PC and console platforms, the company has found tremendous success in bridging the popular shooter to new platforms and distribution methods.

Call of Duty looks poised to continue serving up industry-defining performance, and Activision Blizzard also has a broad lineup of other hit properties to which it could apply a similar model and potentially generate further strong results.

The company arguably has the best franchise lineup in the gaming industry -- including World of Warcraft, Candy Crush Saga, Diablo, and Overwatch, just to name a few. With category-defining hits across a variety of genres, it should be able to continue using its properties as launching pads for innovative and engaging new experiences. And based on its track record of successfully developing and marketing new hit titles, there will be more franchises to come.

The stock has climbed roughly 630% over the last decade, but it's likely that its growth story is just getting started. For investors looking to benefit from the growth of interactive entertainment, Activision Blizzard has the makings of a long-term winner.

Strong management, a great brand, and a growing dividend

Will Ebiefung (Nike): Blue chip stocks are established industry leaders, and as the world's most valuable apparel brand with 57 years in operation, Nike is as blue chip as it gets. Its track record of success and its proven ability to adapt to industry changes make it a top bet for long-haul investors.

Great managers turn challenges into opportunities, and Nike's team has demonstrated this skill during the coronavirus pandemic. The company spent 2020 accelerating its "Consumer Direct Offense" -- a plan to get closer to its customers by eliminating the middleman and leveraging e-commerce. This strategy could strengthen Nike's brand identity, which is key to maintaining growth.

The company's fiscal fourth-quarter results show those efforts are gaining traction. For the period that ended May 31, revenue soared 96% year over year to $12.3 billion. And that was due to more than just an easy comparison with 2020; sales were also up 21% against Q4 of fiscal 2019. Nike Direct sales grew by 73% to $4.5 billion, helped by strong digital sales. And the company generated earnings of $3.56 per share, up 123% from the prior-year period.

For long-term investors, compounding dividend growth can add up. And while Nike's current yield of 0.65% is far from exciting, management has increased the disbursement for 19 years straight. And considering the company's payout ratio is just 26%, it has plenty of room to continued raising it. Nike also boasts an ongoing four-year, $15 billion stock-buyback program that it initiated in 2018. As of May, it had retired $4.7 billion worth of shares under the program.

Two aces up the sleeve

Jon Quast (Airbnb): Most people think old companies make the best forever-stock candidates, but I'm going with a company that was only founded in 2007: Airbnb. The company facilitates short-term rental agreements, allowing hosts to generate income from their properties and enabling guests to find unique places to stay. And when looking forward at the decades to come, I believe Airbnb has a pair of aces up its sleeve that will make it a winning investment.

According to Airbnb, its ADR increased 41% year over year in Q2 2021. Some of this is attributable to a lower supply of spaces. According to AirDNA, a company that tracks the entire short-term rental sector, overall supply is down over 10% right now compared to 2019. Fewer spaces available coupled with higher demand pushes prices up, as Airbnb's results confirm. However, the point is consumers are still willing to pay more for this short-term rental experience even though hotel availability is high and room prices are low. To me, this shows a clear trend: Short-term rentals are more desirable than hotel rooms.

To reiterate, Airbnb is taking market share from hotels and the switch appears to be permanent. These two factors benefit the entire short-term rental space. But here's why I believe Airbnb will benefit more than its competitors. For the first nine months of 2020, 91% of Airbnb's traffic was organic -- it's the brand people know, and it doesn't have to advertise to attract them. But when it does advertise, things are even better. The company ran an ad campaign earlier this year, and Q2 traffic rose by 25% compared to Q2 2019 in the markets where the campaign aired. The ease with which it attracts customers suggests this is Airbnb's game to lose.

Of course, things could still change. For example, laws and regulations could hinder the short-term rental business, or Airbnb could slip and impair its brand image. So even so-called "forever stocks" will need to be monitored much like any other investment. But as the trends are right now, I believe Airbnb is in a great position to keep taking its share of a $3.4 trillion estimated market.