The buy now, pay later service provider could leverage Amazon to become the biggest player in its niche.

But in an eyebrow-raising announcement after the market close on Friday, Affirm Holdings (AFRM 8.66%) told investors it's partnering with Amazon (AMZN 4.46%) to offer its customers financing at checkout. It's a spectacular counterpunch that could see Affirm take the top spot from Afterpay among global BNPL providers.

Here's some background on Affirm, and what the deal might mean for its business. 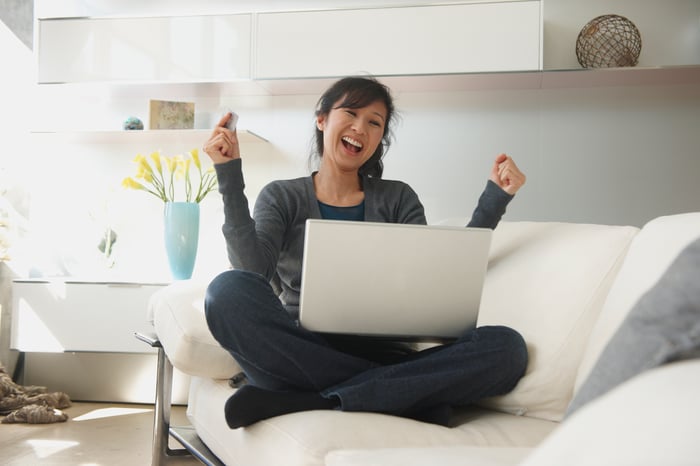 Buy now, pay later is a fresh twist on traditional consumer finance. It's an installment-based lending concept that emerged over the last decade and typically focuses on retail purchases under $1,500.

Affirm integrates with the online checkout process of its merchant partners, giving the customer an opportunity to finance their purchase with a single click. The merchant gets the benefit of higher sales because the customer has greater near-term purchasing power, and the merchant isn't exposed to any credit risk because Affirm deals with the customer directly regarding the loan repayments.

At the moment, Affirm's addressable market is confined to the customers of its merchant partners, but in a move to take more business from the credit card industry, it plans to debut the Affirm Card -- a digital credit card-like product that will incorporate the benefits of BNPL, except consumers will be able to use it anywhere.

Affirm makes money by charging an annualized interest rate of between 0% and 30%, depending on the customer's credit score, with options for them to repay the money over periods from three months to 36 months. But the Affirm Card will provide the ability to repay what they owe in four installments on an interest-free basis.

What the Amazon deal means

While the deal is still in its very early stages pending a pilot program, for Affirm's merchant-integrated business model, Amazon is the crown jewel of retail partners. It's the largest online retailer on the planet, generating $221 billion in sales during the first six months of 2021 alone, and it's expected to capture 50% of all U.S. e-commerce sales this year.

Each customer who checks out with Affirm through Amazon will likely need to establish an Affirm account. Right now, Affirm has approximately 5.4 million customers, but through this deal, it gains exposure with Amazon Prime's 200 million members.

Amazon gets the benefit of boosting some of its customers' spending power. Affirm has an existing partnership with Shopify to offer a similar checkout option, and Amazon can draw some key lessons from that deal. Shopify found that using Affirm's BNPL solution resulted in conversion rates up to 50% higher, up to 28% fewer cart abandonments, and checkout times that were 27% faster.

BNPL is also popular with young shoppers, so Amazon might be drawn to the fact that 50% of Affirm's customers are either millennials or Gen Z. These age cohorts will power e-commerce into the future, so it's important for Amazon to offer the financing options that they prefer.

But investors will need to wait for further details on this deal. While it appears to be a huge win at face value, there have been some concerns that Affirm's deal with Shopify favors Shopify too heavily -- and it could be a disappointment if the Amazon deal is more of the same.

For all of Affirm's progress to date, it still hasn't delivered consistent profits. It's not alone -- that's a problem that plagues the BNPL industry because it has almost no barriers to entry, resulting in seemingly endless competition, which keeps gross margins suppressed.

In a previous article, I suggested that Affirm should explore a full merger with Shopify, as it might be worth more as a part of an e-commerce giant than as a stand-alone finance provider.

But this Amazon deal might be a game-changer for the young company. If it results in a complete integration where Affirm's checkout option is offered in conjunction with all of Amazon's sales, there's potential for Affirm to become the single largest BNPL player. And with that sort of scale, it might even achieve some pricing power that it could leverage to finally reach profitability.

Affirm is set to release its fourth-quarter earnings report on Sept. 9, so more information about this deal should be coming shortly.