One strong earnings report led to a big gain for one stock, while another provided a bargain opportunity.

The Nasdaq Composite (^IXIC) has been incredibly strong lately, leading the rest of the stock market in a solid bull market rally. That continued on Wednesday, with the Nasdaq rising 100 points as of 11:30 a.m. EDT and moving toward a potential new all-time high.

A couple of Nasdaq stocks stood out for their performances early in the session. Ambarella (AMBA 7.35%) reported its latest earnings results and made investors quite happy with the progress the business has made. Meanwhile, Lucid Group (LCID 3.89%) moved sharply lower, although many believe that the drop could well be temporary. You'll find more details below.

Shares of Ambarella surged more than 20% higher on Wednesday morning. The maker of semiconductor chips has embraced the full potential of artificial intelligence, and that has made a huge difference in its financial results and its prospects.

Ambarella's growth showed the wisdom of its strategic moves. Revenue climbed 58% year over year in the  second quarter, with gross margin moving higher by half a percentage point to 62.3%. Adjusted net income multiplied sixfold to $13.1 million, translating to adjusted earnings of $0.35 per share.

Moreover, the AI-focused silicon specialist sees faster growth ahead. Third-quarter revenue should come in between $88 million and $90 million, which would represent a 57%-to-60% growth rate from the previous year's period. That consistent growth bodes well for Ambarella's longer-term trajectory as well. 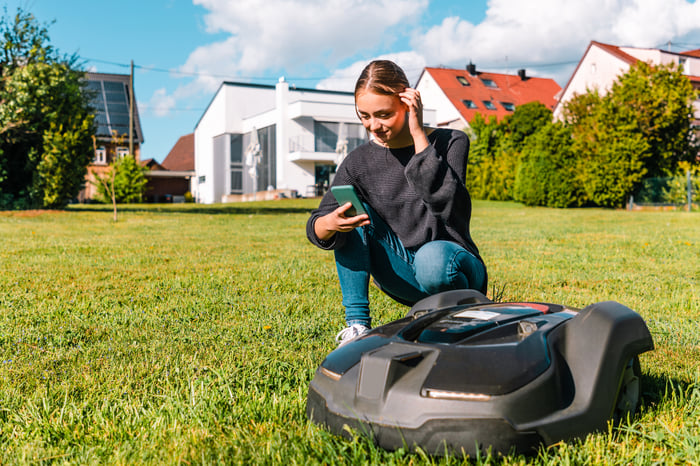 As CEO Fermi Wang explained, Ambarella's choice to embrace the "artificial intelligence of things" market is paying off both in its existing business and in new growth opportunities, particularly in the area of Internet of Things cameras and the automotive industry. Even facing some challenges due to lingering supply chain trouble, Ambarella looks poised to keep expanding.

Meanwhile, Lucid Group shares were down about 9% late Wednesday morning after having opened down almost 20%. The news from Lucid had nothing to do with the electric automaker's fundamental business performance but rather concerned the investing community and access to shares.

Lucid Group went public earlier this year, merging with the special purpose acquisition company Churchill Capital IV. Under the terms of the merger, institutional investors were allowed to make private investments in Lucid at $15 per share, with the provision that they would have to hold on to their shares for roughly six months from the late February announcement.

That lockup period expired on Wednesday, and that freed up those institutional investors to sell off their positions if they chose to do so. With the stock having closed just below $20 per share on Tuesday afternoon, those investors had hoped to score a quick 33% return on their short-term investment. Yet apparently, many of them were willing to take smaller profits in order to reduce their overall risk.

Lucid stock did recover significantly from its worst levels of the day as fans of the EV stock looked at the share-price drop as a chance to add to positions at cheaper prices. Even with another set of shares potentially becoming available for sale a year from now, though, Lucid bulls are encouraged that the stock has made it through this milestone without taking a more serious hit.