Are you interested in low stock prices and big returns?

Now that most brokerages allow customers to buy fractional shares, the price of a stock doesn't matter as much as it used to. After all, it doesn't tell you what the business is worth. It's just a function of how many shares exist. You can cut a pizza into eight or 16 slices, and it's still the same pizza.

That said, some investors either can't buy portions of shares or have a preference for companies with stock prices below a certain threshold. And some investors won't buy shares unless they pay a dividend. For that reason, I came up with three great stocks that meet both criteria: eXp World Holdings (EXPI 9.52%), Buckle (BKE 0.75%), and Gentex (GNTX 2.22%). Here's why I chose them. 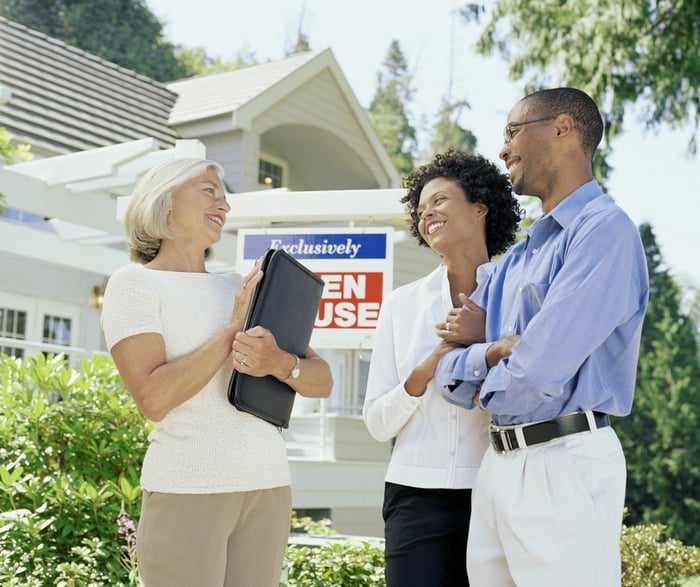 It's a meager payout -- $0.04 per share -- but it could grow much larger over time. Besides, the real story for the digital real estate brokerage company is growth. And a lot of it.

By creating a remote, broker-focused agency through its cloud-based platform -- and its innovative equity and revenue-sharing program for agents -- eXp has created a desirable place to work for real estate professionals. The growth in its most recent quarter underlines just how compelling the offering is proving to be.

The pace of growth isn't likely to ebb anytime soon. In the last year, management expanded operations into select countries on every continent (except Antarctica), as well as the Middle East. It also completed its coverage of North America by adding Mexico to the U.S. and Canada.

An important growth engine for the company is its multilevel-marketing style incentives. Not only does it give 80% of commissions to the broker, it also takes a portion of its 20% and gives it back to the agent who recruited that broker to the company.

It's hard to see traditional brokerages competing with eXp Worldwide's model. That's especially true in a world that has largely accepted remote work as a standard.

It's not often I recommend a stock that is barely up 9% in the past 10 years. Buckle only produces about the same revenue as it did in 2012, but it takes a different approach to generating returns.

One thing sets the company apart -- its yield. Buckle's quarterly dividend of $0.33 is impressive for a $40 stock. But the real attraction is an annual special dividend. That really juices returns.

Since the fall of 2011, the company has paid out a whopping $27.43 per share in total dividends. That means if you bought back then -- when the company was about $28 per share -- you've made a nearly 100% return in dividends alone. In the past year, Buckle has paid out more than $5 per share for an eye-popping yield of 12.6%.

Its stock is also trading near a multiyear low price-to-earnings (PE) ratio. For investors seeking dividend stocks under $50, Buckle delivers. 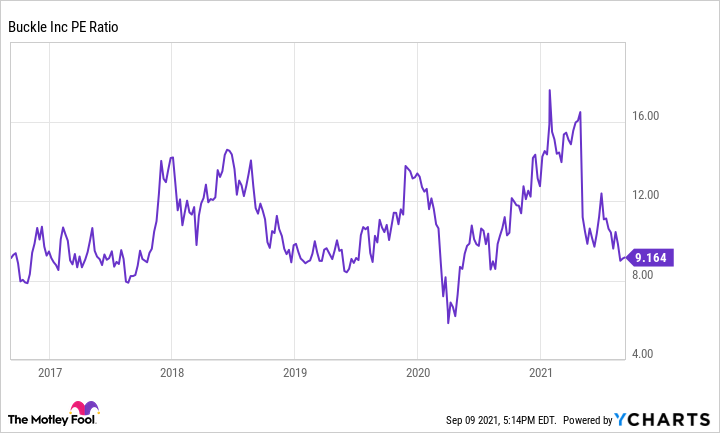 Gentex is another reliable dividend payer with a share price that doesn't give you sticker shock. The company manufactures mirrors that automatically dim to prevent glare from headlights. Management claims it has dominant market share, and that's no joke.

In 2015, Forbes estimated the company's market share at 91%. More recently, Morningstar put the number at 94%. It's got a stranglehold on the niche auto-parts segment.

The stock has been on a steady climb for the past decade, rising 143%, and it's not the only source of return. Its dividend has doubled since 2011, rising for 11 consecutive years. The stock currently sports a healthy 1.6% yield. 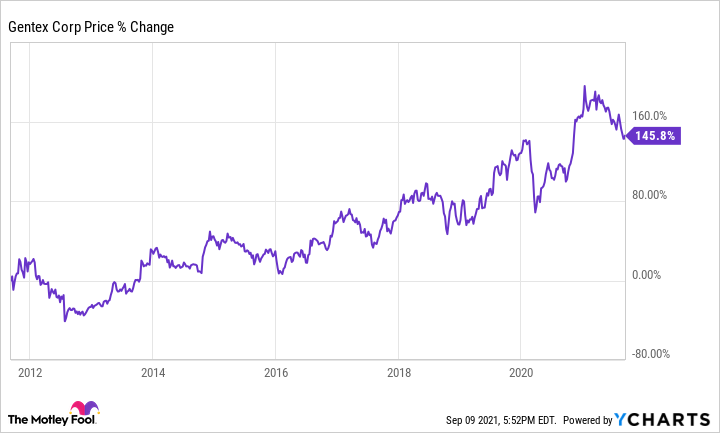 Although cars represent almost all of the company's current revenue, there's potential for its technology in other applications. For instance, Gentex has agreements for windows in multiple Boeing and Airbus airplanes. It's also making strategic acquisitions and working with various carmakers on connectivity and sensing technologies, as well as its in-house vision system.

In short, the company is slowly expanding into tangential products from its standard dimming mirrors. It's a recipe that should lead to stability in the stock price and dividend over the long term. And shares won't cost you an arm and a leg; they currently trade for about $31.