The chipmaker faces a long and painful turnaround.

Intel (INTC -0.82%) has been a lackluster investment over the past three years. The chipmaker's stock has risen about 15%, but has trailed far behind the PHLX Semiconductor Index's gain of approximately 130%.

Intel also lost Apple (AAPL -0.80%) as a major customer after Apple bought out its baseband modem business and opted to replace Intel's Mac CPUs with its own Arm-based processors. 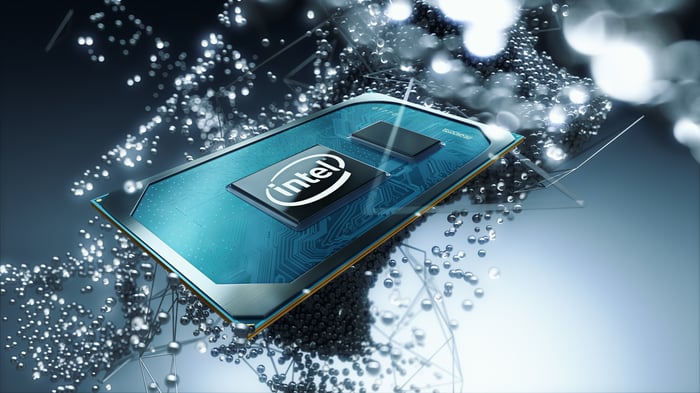 CEO Brian Krzanich's abrupt resignation in 2018 unnerved investors, and his successor Bob Swan mainly focused on cutting costs and buying back shares instead of solving Intel's pressing R&D and manufacturing issues. All those challenges caused investors to pivot toward more promising chip stocks.

But could Intel's lackluster performance actually make it a contrarian play in this frothy market? Let's examine three reasons to buy Intel -- as well as one reason to sell it -- to decide.

1. Intel's new CEO has "accelerated" plans for the future

Instead of entertaining the idea of turning Intel into a fabless chipmaker, as Swan did, Gelsinger doubled down on Intel's first-party foundries with a new "Intel Accelerated" roadmap in late July.

In this revised roadmap, Intel renamed its nodes to better reflect the transistor density of each generation and highlight more favorable comparisons with TSMC. Gelsinger declared Intel would catch up to TSMC in the process race by 2024, then reclaim the process lead by 2025.

Gelsinger plans to achieve that goal by spending tens of billions of dollars on new foundries, upgrading the company's plants to use ASML's (ASML -0.81%) latest lithography machines, expanding its third-party foundry services to pull orders away from TSMC, and attracting government subsidies in the U.S. and Europe to resolve the ongoing chip shortage and eliminate the industry's production bottlenecks in Asia.

If Intel achieves all those goals, its growth could accelerate over the next decade and make it a compelling long-term investment again.

2. Creeping up on AMD and Nvidia with GPUs

Intel generates most of its revenue from PC and data center CPUs, but it launched its first new discrete GPUs in over a decade last year. Intel previously abandoned the high-end GPU market amid tough competition from Nvidia (NVDA -1.58%) and AMD, but it's now trying to bundle its new GPUs with its CPUs.

This is still a fledgling business for Intel, which will ironically rely on TSMC to manufacture its GPUs, but it could generate a new revenue stream while widening its moat against Nvidia and AMD.

The bears will claim Intel deserves its discount valuation because it's growing at a much slower rate than those chipmakers. That point its valid -- analysts expect Intel's revenue and earnings to decline in both 2021 and 2022 as it executes its costly turnaround plan.

However, Intel's low multiple and forward yield of 2.6% should also limit its downside potential, and could make it an attractive defensive dividend stock during a market crash.

The one reason to sell Intel: TSMC

Intel could turn around its business over the next few years, but catching up to TSMC could be brutally difficult. TSMC plans to spend up to $100 billion over the next three years to expand its capacity, and it's already secured government subsidies in the U.S. for its new plants in Arizona -- a move which Gelsinger fiercely criticized in a sponsored Politico article in June.

TSMC remains comfortably ahead of Intel in the process race, and its top customers -- which include Apple, AMD, Nvidia, and Qualcomm -- probably won't switch over to Intel's expanding (but untested) third-party foundry services anytime soon.

Gelsinger has set ambitious targets for Intel, but it's trying to turn around a massive business with serious execution issues while competing against an industry leader that is firing on all cylinders.

Intel's stock won't fall off a cliff, but I doubt it will outperform most of its semiconductor peers or the broader market. It could be too late to upgrade its foundries and catch up to TSMC, and it could continue to cede the PC and data center CPU markets to AMD.

Therefore, investors should stick with higher-growth chipmakers like AMD and Nvidia or industry linchpins like TSMC and ASML, but avoid Intel until it backs up Gelsinger's bold claims with some actual progress.