Please ensure Javascript is enabled for purposes of website accessibility
Log In Help Join The Motley Fool
Free Article Join Over 1 Million Premium Members And Get More In-Depth Stock Guidance and Research
By Adria Cimino – Sep 12, 2021 at 6:00AM

This could guarantee major orders and revenue down the road.

Pfizer (PFE 0.74%) and Moderna (MRNA -0.23%) have already fully vaccinated 96 million and 66 million Americans, respectively. That seems like a lot of people protected from the coronavirus. But many Americans still are refusing vaccination. This, as the delta variant has surged -- sending more and more people to the hospital with severe coronavirus cases.

For months, health officials have urged everyone to get vaccinated. They've stopped short of making it mandatory. But in a dramatic move this past week, President Joe Biden took a step that should result in more revenue for vaccine leaders Pfizer and Moderna down the road. 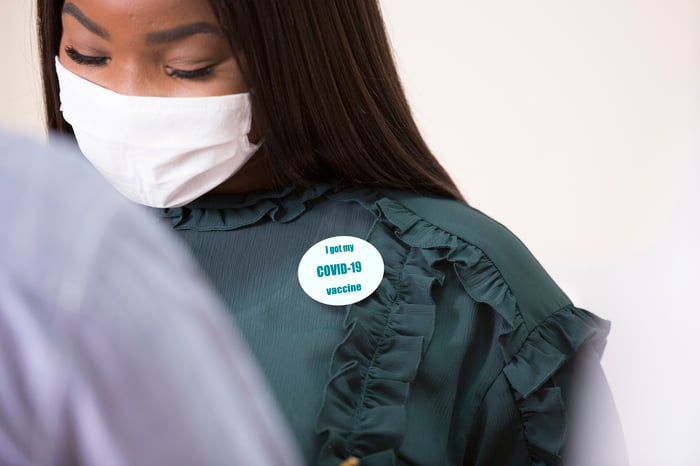 "As your president, I'm announcing a new plan to require more Americans to be vaccinated," Biden said according to a transcript published by The New York Times. He announced the plan from the White House on Thursday. The key word here is "require."

Now, a whole new group of people must opt for vaccination if they hope to work. The plan orders companies of 100 employees or more to mandate vaccination -- or test unvaccinated employees once a week. Biden is requiring vaccination of all government employees -- without an option to test weekly instead. And finally, Biden says the country's 17 million healthcare workers all must be vaccinated.

Overall, the new requirements affect about 100 million Americans, or two-thirds of the workforce, the president said.

It's highly likely even workplaces that aren't covered by Biden's mandates will hop on the bandwagon. A survey conducted by insurance firm Willis Towers Watson last month offers us evidence. About 52% of employers surveyed said they would have some sort of vaccine requirement in place by year end, ABC News reported. And those covered by Biden's mandate are likely to comply. Otherwise, they'll face major fines.

Effect on Pfizer and Moderna?

How will this affect Pfizer and Moderna? In the near term, we should see an increase in the daily number of vaccine doses administered. Over the past few months, the numbers have remained pretty flat. Any increase here won't result in immediate orders or revenue for either company, though. That's because the U.S. has already ordered enough doses to cover all Americans for a first full vaccine series and a booster. That's 500 million doses of vaccine from each company. The doses are to be delivered through the first quarter of 2022.

But Biden's mandates could mean billions in guaranteed vaccine revenue down the road for Pfizer and Moderna. Here's why. If Biden's plan works, I would expect the government to order enough vaccine doses for 2022 to once again cover the entire population. (If Americans shunned the vaccine and doses were left on shelves, I wouldn't expect the government to make a big order next time around.)

Now let's do some math specifically related to Biden's new mandates. The 100 million Americans affected will need 300 million vaccine doses. Here, I'm including the two-dose regimen, followed by a booster about eight months later. The U.S. has purchased Pfizer and Moderna shots for between $15 and $20 a dose. So, vaccinating this population equals about $6 billion in vaccine revenue. And if the U.S. requires vaccination of this group on an annual basis, we're looking at guaranteed recurrent revenue.

With the idea of required vaccination, these already massive revenue levels may move even higher. And here, I'm only talking about the situation in the U.S. Other countries also have taken steps to require vaccination. For instance, France requires individuals to be vaccinated or recently tested to enter theaters or sit down at a restaurant.

All of this means that stunning revenue gains from Pfizer and Moderna are far from over. Investing in these stocks shouldn't be part of a short-term strategy. Instead, they're stocks you'll want to keep in your portfolio for the long term.