Shares of coronavirus stocks Moderna (MRNA 0.48%) and BioNTech (BNTX 0.16%) rose on Thursday by 1.4% and 4.9%, respectively, in contrast to the stock market's dip on the day. This followed news that the two companies had their coronavirus vaccines fully approved by a national regulator.

That authority is Health Canada. On Thursday morning, it switched on the green light for both Moderna's mRNA-1273 (brand-named SpikeVax) and Comirnaty from BioNTech and its development partner Pfizer (PFE -0.33%). Similar to Comirnaty's recent regulatory path in the U.S., the two shots had only been temporarily authorized for use in Canada and lacked full approval. 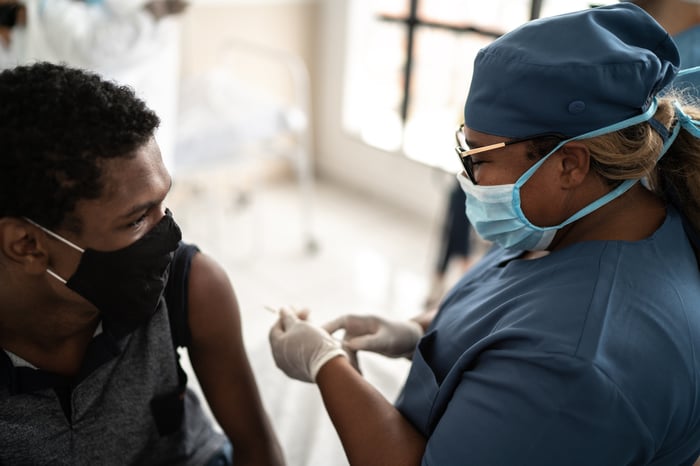 The regulator's nod covers patients 12 years of age and older. Recently, Health Canada expanded its authorization to cover people ages 12 to 17 for both shots.

It's interesting that BioNTech's stock moved notably higher than that of Moderna. After all, Health Canada's approval is SpikeVax's first by a major regulator (although it has been granted emergency use authorization in over 50 jurisdictions, including the U.S.).

The Pfizer/BioNTech and Moderna jabs are not the first ones to be authorized in the country to combat the resurgent coronavirus.

In February, Health Canada approved Vaxzevria, co-developed by pharmaceutical sector giant AstraZeneca and the U.K.'s Oxford University. However, the government soon suspended its use for individuals under 55 due to apparent links to rare blood clots and concerns about supply issues. Finally, the one-shot vaccine from Johnson & Johnson's Janssen unit received its approval in March.

In contrast to the newcomers, though, the AstraZeneca and the Johnson & Johnson jabs have only been approved for individuals 18 and older.

While the change in status of a previously authorized vaccine isn't much of a game-changer, Health Canada's move could help bring out reluctant people who cited the lack of full approval as reasons for not getting a shot. Additionally, it strengthens the Pfizer/BioNTech and Moderna vaccines as go-to solutions for fighting the still-menacing international health threat.