Please ensure Javascript is enabled for purposes of website accessibility
Log In Help Join The Motley Fool
Free Article Join Over 1 Million Premium Members And Get More In-Depth Stock Guidance and Research
By Dave Kovaleski – Sep 17, 2021 at 7:46AM

A dirt-cheap valuation may soon rise thanks to some of the moves this company is making.

In that mix, there was one small bank that has quietly posted strong returns but remains undervalued. This bank also has some major catalysts that could propel it even higher in the years to come. This is why you might want to consider buying undervalued bank stock New York Community Bancorp (NYCB -0.22%) before everyone else does. 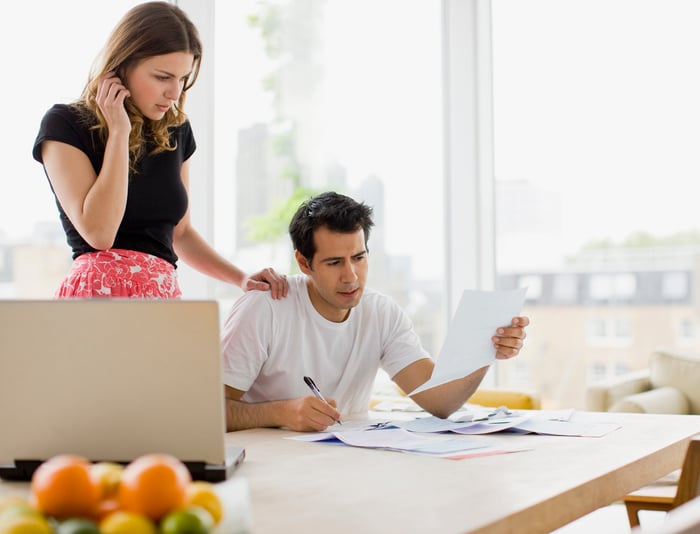 A bank on the move

New York Community Bancorp is the holding company of New York Community Bank, which is the largest thrift bank in the U.S. with about $57 billion in assets under management. A thrift bank is also known as a savings and loan bank in that it offers savings and checking accounts for individual customers, as well as loans. These banks typically don't offer loans and services to businesses the way commercial banks do.

New York Community Bank has 237 branches in five states -- New York, New Jersey, Florida, Arizona, and Ohio -- with 128 of the branches in the New York City area. It branched out to the other states over the years through acquisitions.

It is now growing once again with the acquisition of Michigan-based Flagstar Bancorp (FBC -0.19%) earlier this year. Flagstar will bring $27 billion in assets to New York Community Bancorp along with some 158 branches in Michigan, Indiana, California, Wisconsin, and Ohio. Flagstar is also a leading mortgage lender and servicer, providing loans through a wholesale network of brokers and 86 retail locations in 28 states.

When the deal closes in the fourth quarter, the combined company will have $85 billion in total assets and about 400 branches in nine states with 86 retail lending offices in 28 states. Further, it will accelerate New York Community Bank's transition to a full-service commercial bank, as President and CEO Thomas Cangemi said back in April: "The combination of our two companies will allow each of us to continue our transformation to a full-service commercial bank by broadening our product offerings while expanding our geographic reach with no branch overlap."

And given a bigger balance sheet, we will have the opportunity to leverage up in a number of businesses and will increase market share. These businesses include both direct and indirect multi-family lending, mortgage warehouse lending, mortgage banking as well as expanding traditional C&I lending into each of our markets.

The acquisition of Flagstar is a major catalyst for this bank, which has been having a good year, with revenue up 32%, net income up 48%, and net interest margin up 32 basis points in the second quarter year over year. Also, loan volume was up 4% year over year, and the efficiency ratio was a low 37% at the end of Q2.

But another major catalyst is a groundbreaking new venture it is launching with Figure Technologies to create a digital payment process on the Provenance Blockchain, which is designed for the financial services industry. If your eyes glaze over at the mention of blockchain, just know this: New York Community Bancorp will serve as the financial intermediary, facilitating payments between buyers and sellers of Figure's digital shares through its new digital marker, USDForward. It is the first digital marker to be used by a bank on the Provenance Blockchain.

The bank plans to move forward with additional marker transactions as well as future projects with Figure Technologies as part of their broader strategic partnership. "This is the first of a series of groundbreaking transactions we plan on doing with New York Community Bank," said Mike Cagney, CEO of Figure.

An undervalued stock at the moment

So, you take this efficient bank, scale it up with a major acquisition, and add a groundbreaking new venture in the world of blockchain -- and you've got a good story. You've got an even better story when you realize that this bank is ridiculously undervalued right now with a forward price-to-earnings (P/E) ratio of around 8 that is trading below its book value with a price-to-book (P/B) ratio of 0.90. You might want to consider getting in on this bank before the market sees its value.