The bank, which has historically operated on more of a thrift model, has made some good progress on diversifying its funding and loan mix.

There is a lot going on at New York Community Bancorp (NYCB -1.52%) these days. Earlier this year, the nearly $58 billion asset bank announced its intention to acquire the Michigan-based Flagstar Bancorp in a deal that will grow NYCB to roughly $87 billion in assets once the acquisition is closed at the end of the year.

The deal is also expected to accelerate NYCB's plan to transition from a more thrift-like model to a traditional commercial banking model, a goal that NYCB CEO Thomas Cangemi has had since he took the reins of NYCB at the start of this year. In the second quarter, the bank made organic progress on this transition and appears very committed to seeing it through. Let's take a look.

NYCB is different from most banks in that up until pretty recently, it still operated like a thrift, which is an older type of banking model that has fallen out of favor today. Thrifts are known for relying on higher-cost deposits and funding and making lots of fixed-rate loans, typically home mortgages. A lot of times, this can make a thrift liability sensitive, meaning that more of its deposits and debt reprice with interest rates than its assets such as loans, which also means these banks do well when interest rates are falling. NYCB still looks more like a thrift, with the majority of its loans in fixed-rate multifamily loans, while the bulk of its deposits are still primarily in higher-cost certificates of deposits (CDs) and money market accounts.

At the very end of last year, NYCB's longtime CEO Joseph Ficalora retired in a sudden departure and Cangemi took over. Immediately, Cangemi turned his attention to bringing in more sticky, core funding and diversifying the bank's revenue, and there was progress on both of these initiatives in the second quarter. 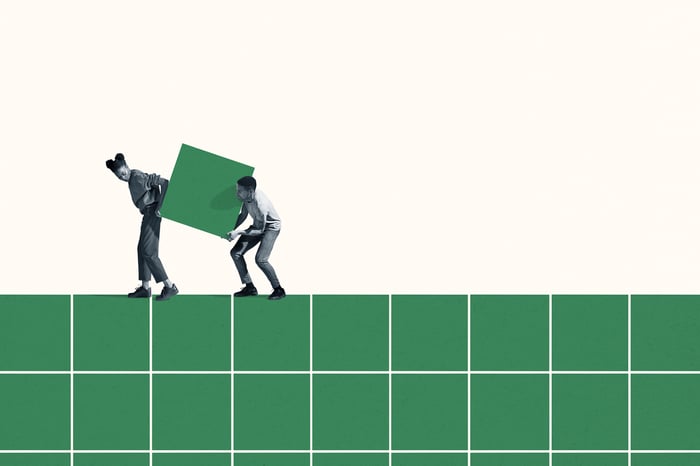 Average deposits in the second quarter increased $2.3 billion, or 7%, all from non-interest-bearing (NIB) deposits, which the bank doesn't pay any interest on. Meanwhile, CDs and borrowed funds continued to decline. The big increase in NIB deposits can be attributed to a partnership NYCB struck with the core processing provider Fiserv toward the end of the first quarter, where NYCB banked stimulus payments that came on debit cards to consumers. Management hopes this will be the first of several partnerships like this that will allow it to continue to bring in zero-cost deposits.

On the lending front, NYCB continued to grow multifamily loans, but also new verticals as well, including specialty finance and commercial and industrial (C&I) loans, which are up 2% and 57%, respectively, from the first quarter.

Flagstar will help even more

Seeing this kind of progress from NYCB on an organic basis is exciting because once the acquisition of Flagstar closes in 2021, that will accelerate NYCB's transition even more. Flagstar not only makes NYCB bigger but it helps further diversify its overall funding and lending.

Flagstar brings a large mortgage warehouse lending business that will help reduce the overall percentage of multifamily loans in NYCB's loan portfolio from 75% to 56%. On the deposit front, Flagstar brings a huge portfolio of NIB deposits that will help grow total NIB deposits at NYCB from 10% to 21%. Most large banks these days have somewhere in the realm of 30% NIB deposits, so there is still work to do, but the acquisition certainly makes meaningful progress on changing the funding composition. The combined bank will still have 40% of its deposits from CDs and Federal Home Loan Bank borrowings, which provides ample opportunity to continue to reduce funding costs over time.

There could also be lots of revenue synergies at the combined bank, which have not been modeled into the existing merger numbers that already project NYCB to grow earnings by 16% in 2022 from what it was previously projected to earn on a stand-alone basis. The synergies could include cross-selling Flagstar's consumer products such as residential mortgages, home equity lines of credit, and other consumer products to NYCB's existing customer base.

It also means scaling up the strong existing businesses at NYCB and Flagstar, including direct and indirect multi-family lending, mortgage warehouse lending, and mortgage banking. And then of course expanding C&I lending across the entire combined footprint will be a focus as well, as those relationships not only bring in good loans, but also good deposits as well.

A continuation of progress

Ever since Cangemi took over at NYCB, he has been razor-focused on leaving the thrift model behind. Cangemi really seems committed to achieving this through any and all means. He spoke of further digitizing the bank's capabilities, launching a banking-as-a-service business, and even wading into the world of blockchain.

Cangemi may be getting a little ahead of himself with some of those initiatives, as there is plenty of work to do with the integration of Flagstar and continuing progress on C&I lending and NIB deposits. But I like Cangemi's enthusiasm so far. He wants this to be a growth story, and while I am sure the market will want to see more evidence of this, the progress so far is undeniable.