An explosion in the digital-payments space is propelling this business. The biggest risk facing investors might be not owning a piece of it.

In order to generate market-beating returns, you don't necessarily need to take on a greater amount of risk. Owning high-quality companies for a long time is the key to achieving stellar stock market performance. It's a surprisingly simple strategy, though definitely not easy to do in practice.

PayPal Holdings (PYPL -0.88%) is a perfect example of a low-risk stock that has been a long-term winner. The stock has shot up nearly eightfold since returning to the public markets in 2015, and the current value of the business is more than $300 billion.

But don't worry. The future also looks bright for this fintech giant. Here's what investors need to know. 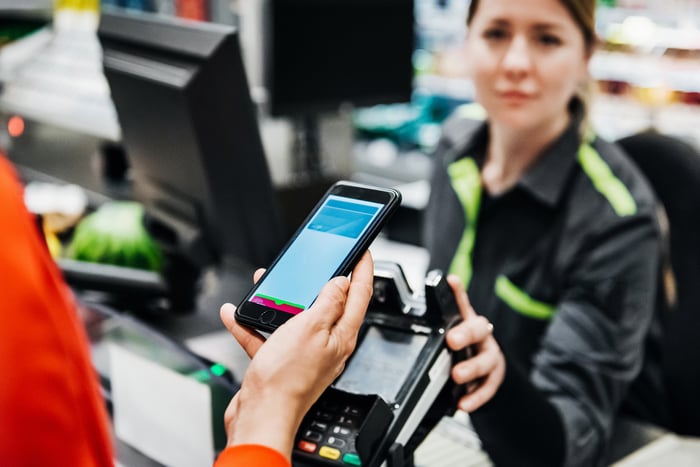 This is an exceptional business

PayPal is a low-risk investment in large part because it's a fantastic company. In the most recent quarter, which ended June 30, total payment volume and revenue came in at $311 billion and $6.2 billion, respectively. Both were up meaningfully from Q2 2020, which is quite remarkable given the boost electronic payments received during the pandemic. Registering healthy gains on top of last year's performance is impressive.

Because PayPal operates a two-sided ecosystem consisting of 371 million active consumers and 32 million active merchants, the company's competitive strength lies in its powerful network effects. Consumers want to use a payment product that already has a bunch of merchants on it, and merchants want to adopt a service with hundreds of millions of individuals (and potential customers) on it.

While it's difficult to create a business like this from scratch, it's virtually impossible for new rivals to compete once that business reaches the scale that PayPal has built. And over time, with the addition of new accounts, the network only grows stronger.

This dominant business model leads to some outstanding financial metrics. PayPal has now processed a whopping $1.1 trillion in payments over the last 12 months, which is important since the company's success depends on achieving higher payment volume. And during Q2 2021, PayPal sported a free cash flow margin of 17%. This is phenomenal and demonstrates the low capital expenditures (about 4% of revenue) needed for PayPal to grow its business.

Consequently, PayPal is able to expand at a rapid pace while also returning cash to shareholders. Over the first six months of 2021, the business repurchased $1.5 billion worth of stock. Investors benefit immensely when a strong business buys back shares, because each remaining share is now worth more. Furthermore, the company's strong balance sheet, with a net cash position of more than $10 billion, provides a valuable safety net.

As you can see, PayPal's stock presents a low-risk opportunity for investors.

The total transaction volume for digital payments is expected to reach a staggering $10.5 trillion by 2025, implying a massive global addressable market for PayPal to attack, and cash still remains the most popular payment method in many parts of the world. As more countries inevitably raise their living standards with improvements in technology and middle-class spending, more commerce will shift online. PayPal looks to be a major beneficiary of this trend.

CEO Dan Schulman certainly believes the growth story is far from over. He wants the company to one day reach 1 billion daily active accounts. I think this is possible.

Not only is PayPal riding the boom in digital payments, but it continues to innovate by introducing new products and services. For example, users in the U.S. can now check out with their crypto balances. And PayPal is working on adding stock market investing capabilities onto its platform in the near future.

Additionally, the company recently announced the acquisition of Japanese buy now, pay later (BNPL) business Paidy, bolstering its presence in this popular market segment. It's all part of Schulman's plan for PayPal to be a one-stop shop for consumer personal finance.

If history is any guide, the business and the stock will continue delivering solid returns for investors over many years. PayPal has clearly been a low-risk winner. Expect much of the same in the future.