Uranium spot prices were up big this week and that pushed uranium stocks higher as well.

Shares of uranium stocks were on fire this week as uranium spot prices continued a steady rise. According to data by Markets Insider, the spot price of uranium is up 65.5% so far this year and has risen from $42.40 per pound to close last week to $49.65 as I'm writing. This has suddenly become a hot commodity in the energy industry. 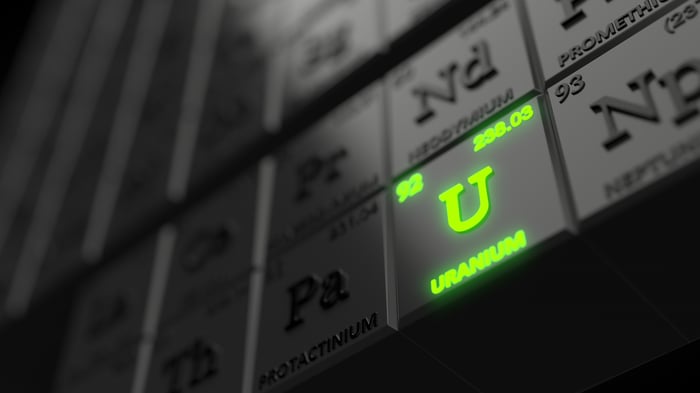 The Sprott Physical Uranium Trust (SRUU.F 3.30%) got approval to expand its at-the-market equity program to issue up to $1 billion in additional units. Since the trust buys physical uranium it will likely be a big buyer over the next few months, which traders are betting will push the spot price even higher.

The trust is adding a big buyer to the uranium market, which is helping uranium stocks, but the party may not last long. If companies increase supply to match the increase in demand, prices will likely fall over time.

We are also seeing increased activity in uranium trading from hedge funds and on Reddit boards. Cameco (CCJ 1.44%) was a top stock discussed on WallStreetBets on Monday and uranium overall is getting more attention than the commodity usually gets. Like it or not, Reddit can drive commodities or stocks higher short-term and that's one reason uranium stocks were up this week.

Uranium Royalty likely led the market this week because it announced on Wednesday that it has entered into contracts that will increase its uranium holdings to 648,068 pounds at an average cost of $33.10 per pound. Given the rise in prices, there could be a windfall for the company if uranium prices hold.

Uranium stocks are moving primarily because the underlying uranium commodity is up this week. And there's been a bull market in uranium over the last few months, so this is the momentum that started a while ago.

What we don't know is where uranium prices will be headed long-term. Higher prices could mean more production from miners and that would rebalance supply and demand. If prices fall next week or next month because the additional demand from some buyers has been met by added supply, uranium stocks could drop.