There are 50 reasons for theme park buffs to swing by Mickey D's now.

If you're a fan of Walt Disney's (DIS 0.90%) theme parks there's a good chance you're going to be hungry for some Happy Meals at your local McDonald's (MCD -0.49%) for the next few weeks. The two iconic brands teamed up last week for a limited-time promotion with Happy Meal toys commemorating the world's most-visited theme park resort turning 50.

McDonald's is no stranger to trendy tie-ins. It's been partnering with rising musical celebrities since last year to offer special meals and in some cases related artist merchandise. The controversial Monopoly contest promotion was a big draw in the past. Mickey D's has also been cranking out Disney-licensed Happy Meal toy premiums for two decades, and they can be fairly popular when the related property is a hit.

However, this new promotion is different. It's not just a half-dozen or so toys for kids and kids at heart to collect. McDonald's is issuing 50 different commemorative collectibles, tributes to some of the beloved characters that Disney World guests see represented throughout the resort's gated attractions. It's probably going to take you a long time to go through at least 50 Happy Meal purchases to complete the set. 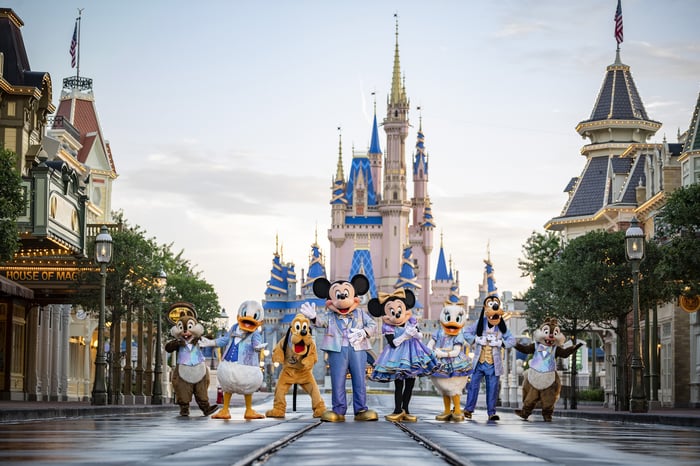 From one Mickey to another

In theory neither company needs this promotional push. McDonald's is doing well. Global comps soared 40.5% in its latest quarter. Naturally year-over-year comparisons are going to be impacted by the pandemic that kept many eateries shuttered or limited and folks eating more at home, but if you go back to 2019 to arrive at pre-pandemic levels, the fast food chain's worldwide comps still rose 6.9% on a two-year basis. The math is even kinder if we focus closer to home, as two-year comps are up 14.9% in the U.S. market.

Disney's two-year revenue gains remain negative, but it's still moving in the right direction on most fronts. When it comes to its theme parks, the segment surprisingly returned to profitability in Disney's latest quarter.

The new 50-year Happy Meals promo will still help improve the fortunes of both global juggernauts. For McDonald's it will mean an uptick in the frequency of visits as folks try to complete as much of the set as possible. It doesn't matter if you have children or not. There's no judgment in the Mickey D's drive-thru lane. It's already becoming a hot collective with complete sets selling for as much as $450 on eBay.

The theme park operator will also score here. It's stretching out the resort's 50th anniversary into an 18-month celebration. Disney has also been raising prices and introducing new premium add-on purchases that will boost per-capita spending by guests. Marketing big-ticket vacations through a low-priced burger chain may like an odd match, but it also makes a Disney World getaway that much more aspirational. McDonald's is also giving away Disney World vacations as part of the new Happy Meals promotion.

It's a win-win combo meal. McDonald's will get a surge in families drawn to the Disney collectibles. The media stock bellwether will find young kids asking their parents to visit the Florida resort as they come across the wrapped display pieces in every Happy Meal box. There's gold in the Golden Arches.