Please ensure Javascript is enabled for purposes of website accessibility
Log In Help Join The Motley Fool
Free Article Join Over 1 Million Premium Members And Get More In-Depth Stock Guidance and Research
By Adria Cimino – Sep 25, 2021 at 6:00AM

They've positioned themselves for success now and down the road.

When I look for stocks to hold for a couple of decades, I won't be won over by short-term winners. I look for a solid track record and/or signals the company has plenty of growth ahead. And I mean growth that won't happen in one spurt -- but instead over a number of years.

Right now, three consumer companies have my attention. These stocks have already demonstrated an ability to perform over the long term. Here, I'm talking about share gains as well as increases in revenue and profit. And it looks like this performance will continue. Let's take a closer look at these stocks that could make you richer as years go by. 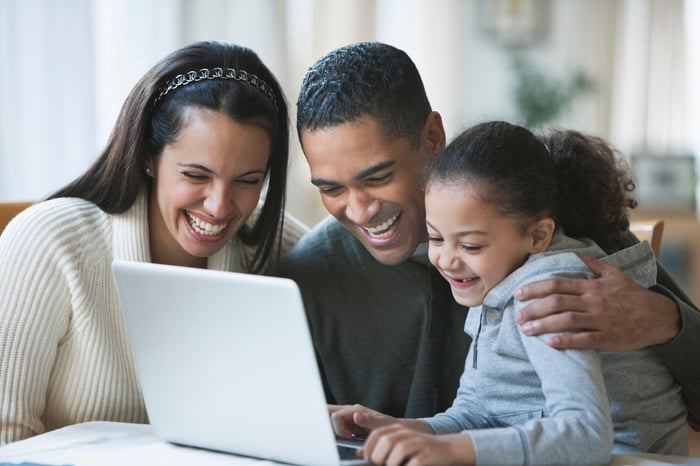 Walt Disney (DIS -1.04%) had a rough time of it during the pandemic. Its parks, experiences, and products unit -- usually its biggest moneymaker -- reported losses. That's for an obvious reason: Disney temporarily closed its theme parks. The good news is the parks are open now and that business has returned to a profit. Of course, this is a short-term story.

Now, let's look to the past and the future. Disney operates the word's most-visited theme parks. The company generally posted increases in annual revenue and net income over the 10-year period leading up to the pandemic. 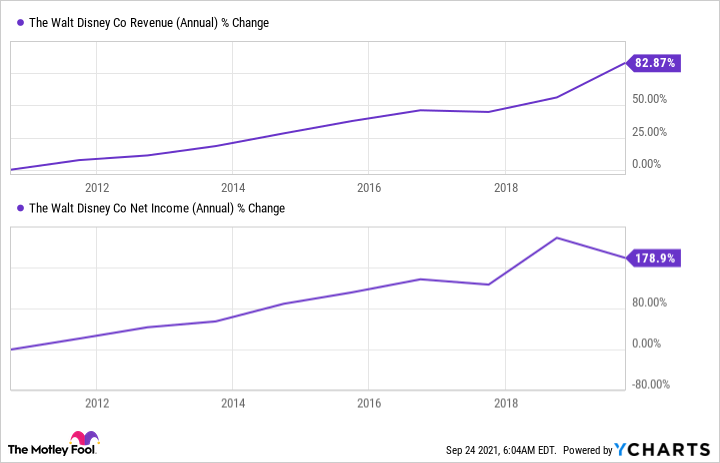 Why am I confident this will continue? People are eager to return to the Disney parks. Attendance levels at Disney World in Florida were at or near capacity during the third quarter. Attendance at Disneyland also was on the rise. And spending at both parks was "exceptionally strong," Disney said.

Disney also is launching its new Genie + system: Guests pay $15 to $20 for access to faster lines at their favorite attractions. This should help Disney further lift park revenue figures well into the future. And growth at Disney's streaming services also will boost growth in the years to come.

Nike (NKE 1.23%) is in a difficult spot at the moment. The maker of athletic shoes and clothing is facing supply chain problems due to temporary factory shutdowns in certain parts of the world. This will weigh on financial performance in the near term. Nike cut its fiscal 2022 revenue forecast to mid-single-digit growth from an earlier forecast of low double-digit growth.

This is a short-term headwind -- especially since we want to hold onto Nike shares for a couple of decades. Here's what most interests us: Consumer demand for Nike products has reached a record high, the company says. Nike fans keep coming back for the company's innovative sneaker designs and brands like Jordan.

Nike proved it could manage headwinds. The retailer successfully made it through the worst of the coronavirus crisis. Fans connected with Nike through its digital platform and continued to buy. Nike runs a membership program that offers benefits such as special deals and member-only products. Nike's quarterly revenue and profit rapidly recovered. 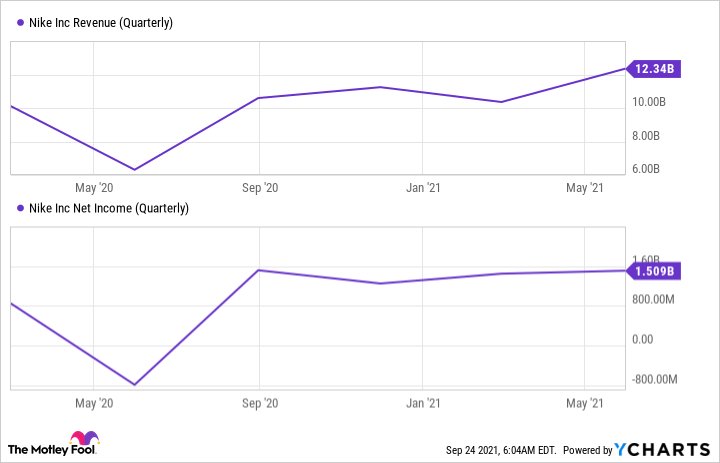 At the same time, Nike grew its digital sales. Digital now accounts for 21% of total Nike brand revenue. In the most recent quarter, digital sales rose 29% -- that's even with physical stores reopened. And repeat buying members increased more than 70%. I expect Nike's investment in digital and its connection with fans through its membership program to drive long-term growth.

Starbucks (SBUX) is on its way to becoming the coffee shop of tomorrow. That's because the coffee chain giant has taken note of the changing environment. Sure, some people still love sitting in coffee shops with a cup of joe. And Starbucks still will give you that. But Starbucks also knows that more and more people want to order from their phones and quickly pick up their drinks.

That's why the company is reshaping its store portfolio. The plan involves opening up smaller pickup-focused shops in city centers. The company also is increasing its drive-thru and curbside pickup locations. Starbucks says the project is about 80% complete.

This, along with Starbucks' product innovation and consumer loyalty should keep Starbucks moving ahead in the coming years. In the most recent quarter, Starbucks said its active members represented 51% of spending in its U.S. stores. As for innovation, Starbucks is growing its cold beverage offerings -- this category made up 74% of sales in the quarter.

As the pandemic lingers, Starbucks still managed to reach a record of $7.5 billion in revenue in the quarter ended June 27. This shows us the company can even deliver when times are tough, a good sign of long-term strength.

As for share movement, Disney, Nike, and Starbucks have outperformed the S&P 500 over time. 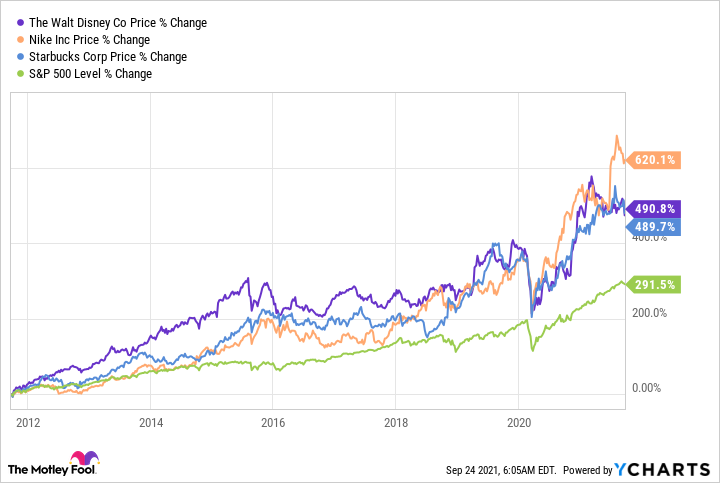 And they've increased revenue and profit, too. Here, I'm looking at performance prior to the pandemic. 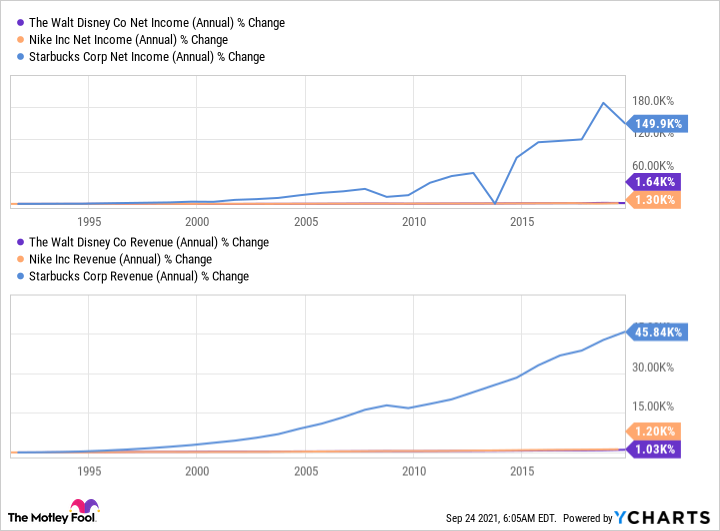 So, even if the companies disappoint in a given year, I'm not worried. These retail stocks have demonstrated their ability to win -- for those investors who believe in them enough to stick around for a while.